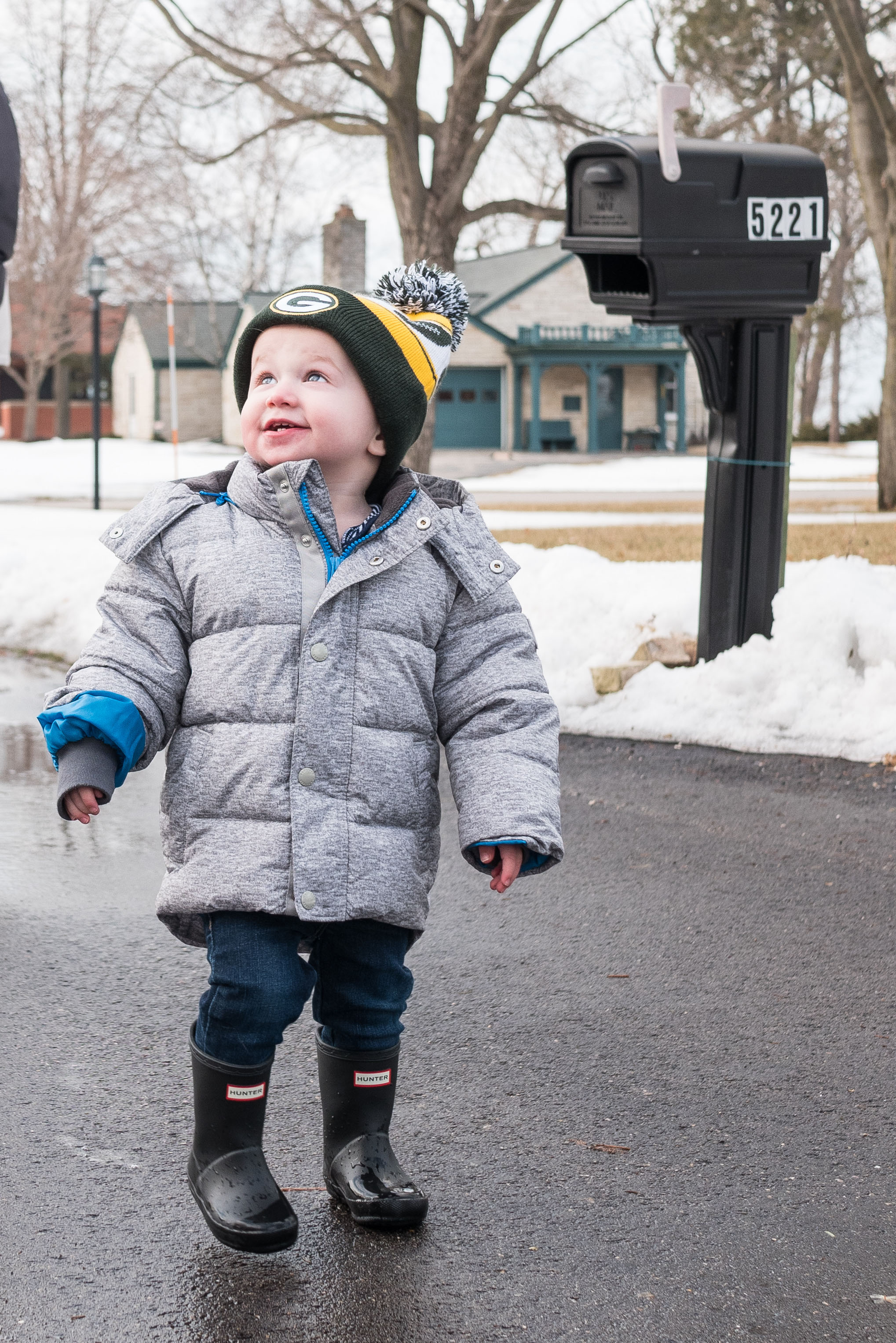 Our Tommy turned 21 months old this past week.

Tommy’s new favorite words are cookie, fishy (for goldfish crackers), and shoes. Tommy asks for specific foods all the time. However, until this past month, with the exception of cheese puffs (which he asks for as “cheese”), he hasn’t used words to ask for foods. Tommy says cookie like “key-key.” The way he says fishy is very similar. Other new-ish words include “night-night,” “dot,” and “bye.” 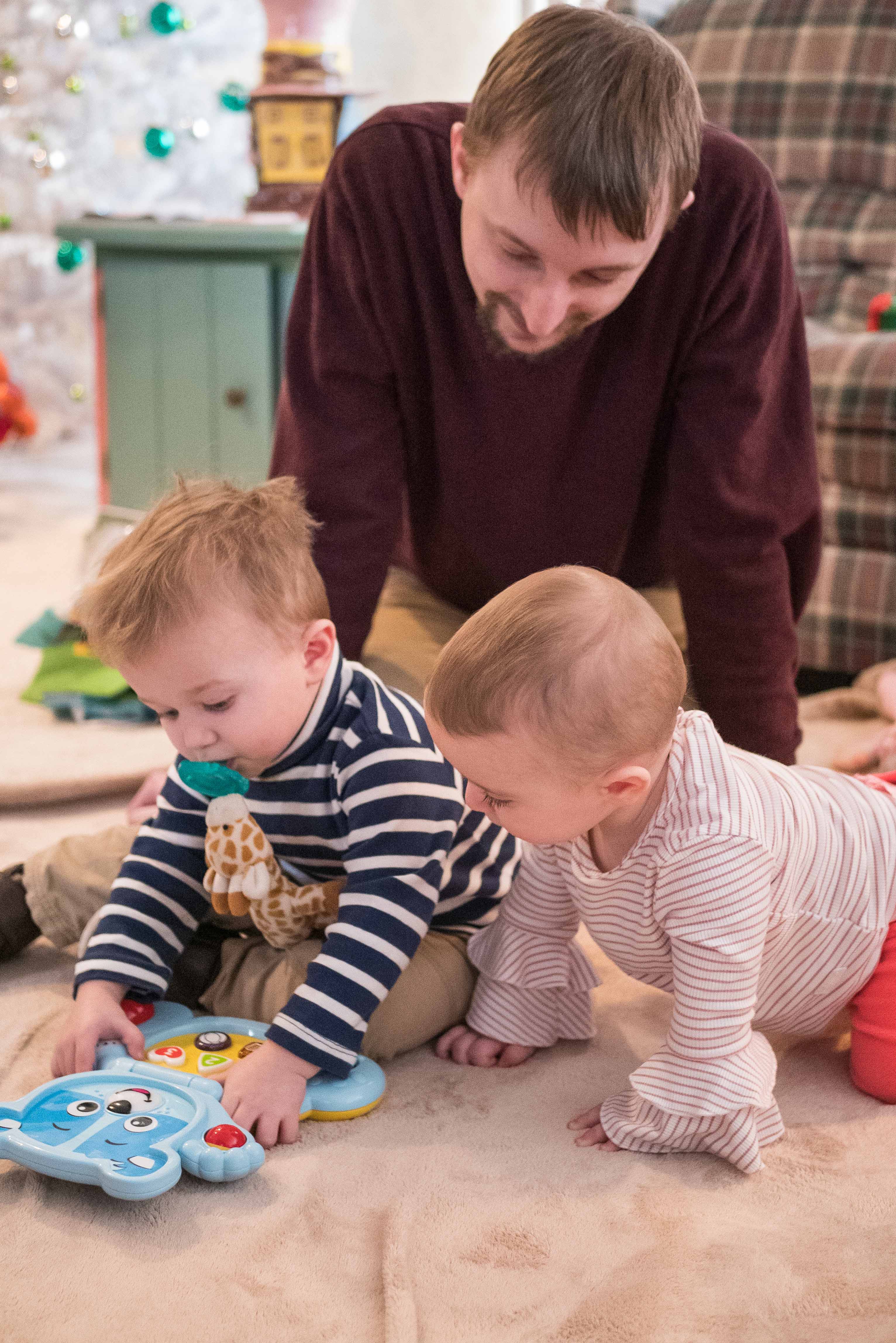 Somehow, I’m not sure that I’ve talked much in my update posts about how Tommy is a very athletic little guy. I’m not saying this to brag because he’s my kid. His gross motor milestones continue to blow me away every month. This fall Tommy learned how to throw overhand without anyone teaching him. He can throw a ball several feet very accurately. More recently, he’s learned how to jump and do somersaults (95% independently, often with very little prompting). Tommy has also been perfecting his light saber fighting footwork and hand skills.

Tommy has learned how to climb and is climbing on everything including the living room furniture and dining room table. He’s also learned how to climb the ladder in his bedroom closet and how to climb into the Baby Einstein. The previous owners took off the closet doors and turned it into a kids’ space of sorts. The cats have enjoyed climbing in it ever since we moved to this house. Tommy has only taken an interest in it the past couple of months. Tommy also recently learned how to open doors, which is exciting. He can now get food out of the pantry and barge in on people in the bathroom. 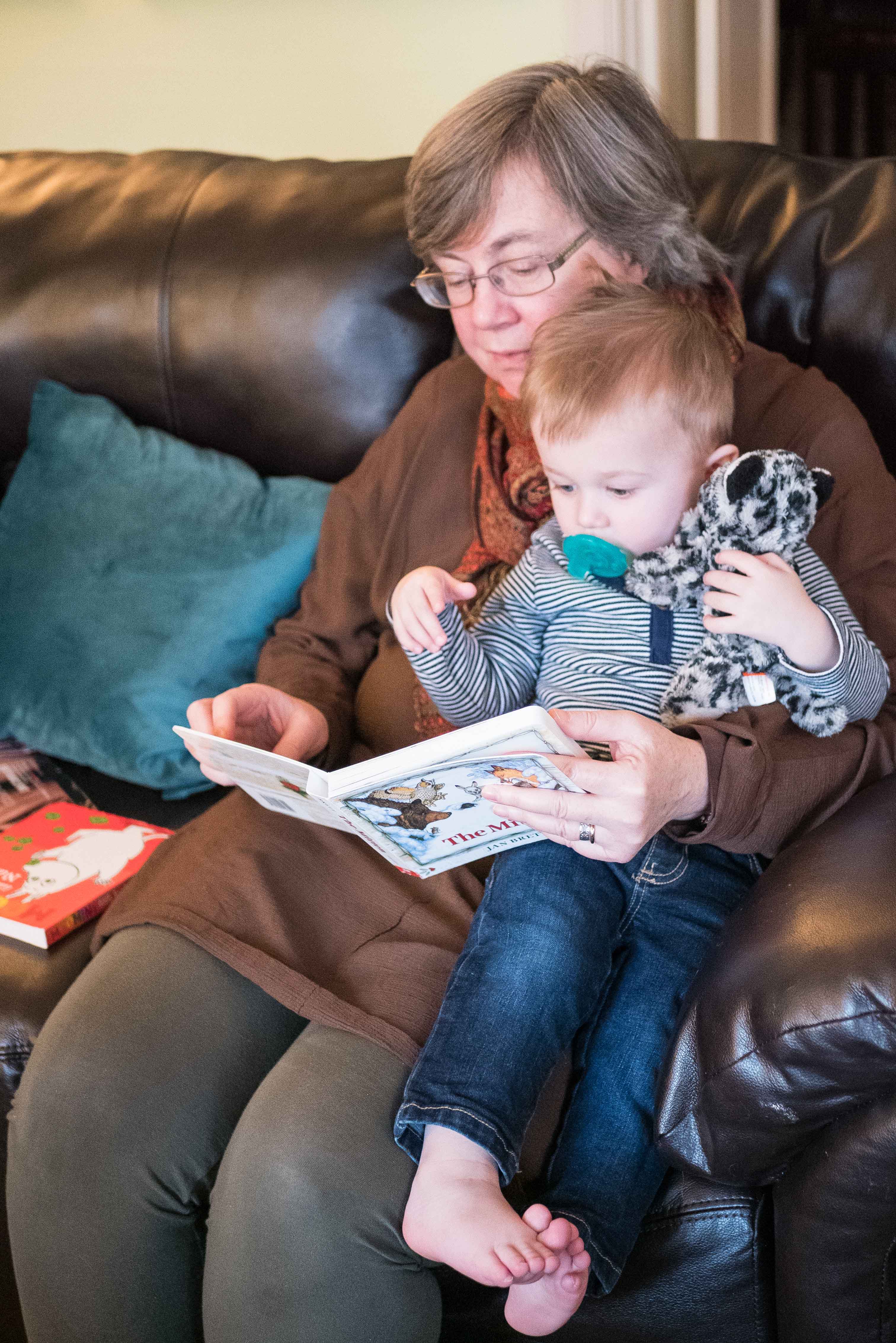 In true toddler form, Tommy is a little particular about what he’ll eat these days. His favorite foods list includes buttered toast, frozen waffles, oatmeal (only if he asks for it or Jake is eating it), blueberries, scrambled eggs, goldfish crackers, pretzels, summer sausage, snack sticks (sort of in between summer sausage and beef jerky), coffee-flavored yogurt (it’s my favorite flavor and thus far, is the only flavor Tommy will eat), peanut butter sandwiches, fruit snacks, nuts (broken in half, for those who are going to judge me for feeding my toddler nuts), and macaroni and cheese. He’s also very into chocolate and donuts these days (who isn’t, right?). Otherwise it’s pretty hit or miss. I’ll always offer him what we’re eating for dinner. He’ll almost always try it. Sometimes he’ll eat a lot of it, other times he’ll only eat a few bites.

Also, in true toddler form, Tommy has days that he doesn’t want to wear clothes. He’ll ask for help taking off his clothes or just start taking off his clothes by himself. (He can’t dress and undress himself yet, but he’s helping out more and more.) Tommy runs warm all year round. Now that it’s getting warmer, I’m sure that there are days he is really warm. Other times he mostly just thinks it’s funny to run around without clothes. 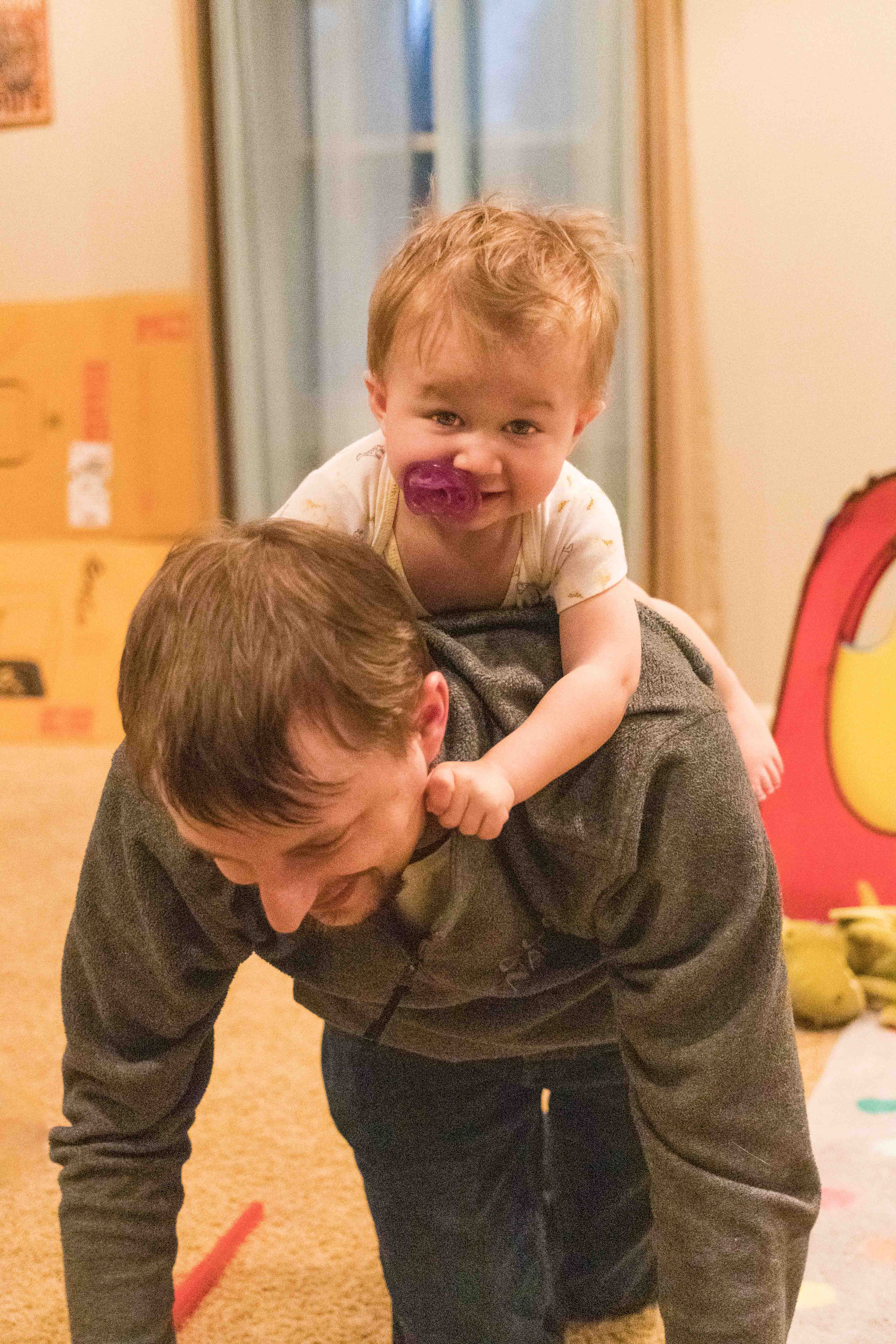 In the past week, Tommy has cut the two bottom teeth on either side of his middle teeth. He has all of his top teeth for now and is just missing two more bottom teeth, on the other sides of the new teeth.

This past month, Tommy has started using delay tactics to avoid going down for a nap or to sleep at night. He’ll ask for water, more stuffed animals, more Wubbanubs/pacifiers, or to brush his teeth (or to brush his teeth again, Tommy really loves brushing his teeth). It’s so funny to me how this behavior is so instinctive. Tommy wants someone to sit with him for a while when he goes down for a nap or at night, so we usually will for 15-20 minutes. We’ve pushed his naptime back slightly, so he’s not going down until 2:00-3:00 (as opposed to 12:30/1:00) most days, unless he was up early. He still naps for at least two hours most days. Tommy goes down for bed around 8:30 and usually sleeps through the night.

In late March, we got in a visit to the Milwaukee Art Museum with Jake to see the current Bouguereau exhibit. We went to Chick-Fil-A for lunch afterward, and Tommy got to climb in the play area after we ate. He made it all the way to the top of the structure by himself but then got scared and needed Jake to help him climb down. He still had a lot of fun, and I know he’ll only enjoy that sort of activity more as he gets older. 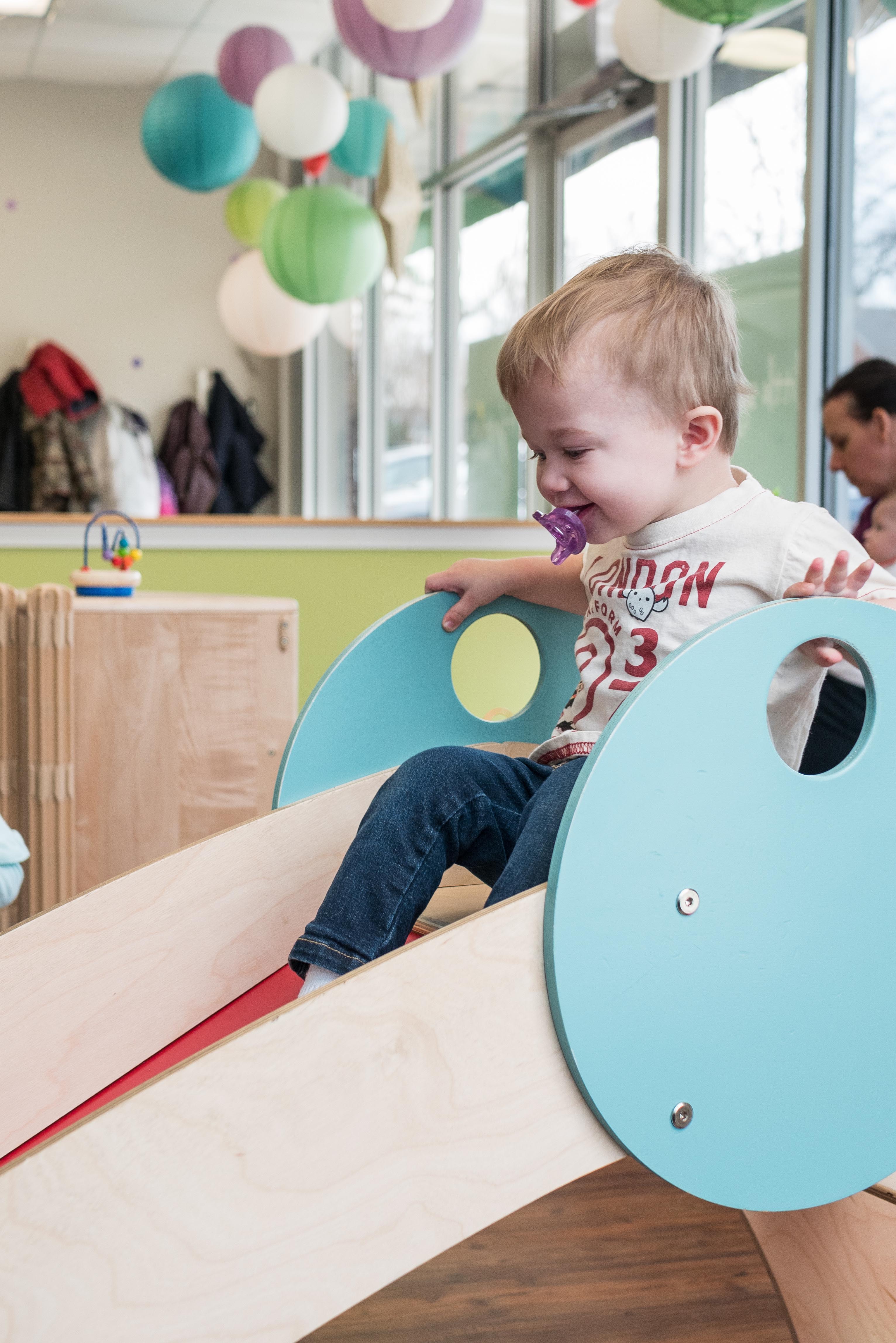 In late March, we also went to Little Sprouts Play Café with friends. This is another local spot that I highly recommend to anyone with kids age five and under. Tommy had a blast, particularly going down the little slide. It was just two steps high, which meant he could climb and slide down all by himself. He even got brave enough to go down on his stomach and loved it.

Tommy also really liked the lookout tower and the toy vacuum. Tommy has been fascinated with vacuums for a while. Currently, he’s not a big fan of the real vacuum cleaner noise, so the toy vacuum is perfect. 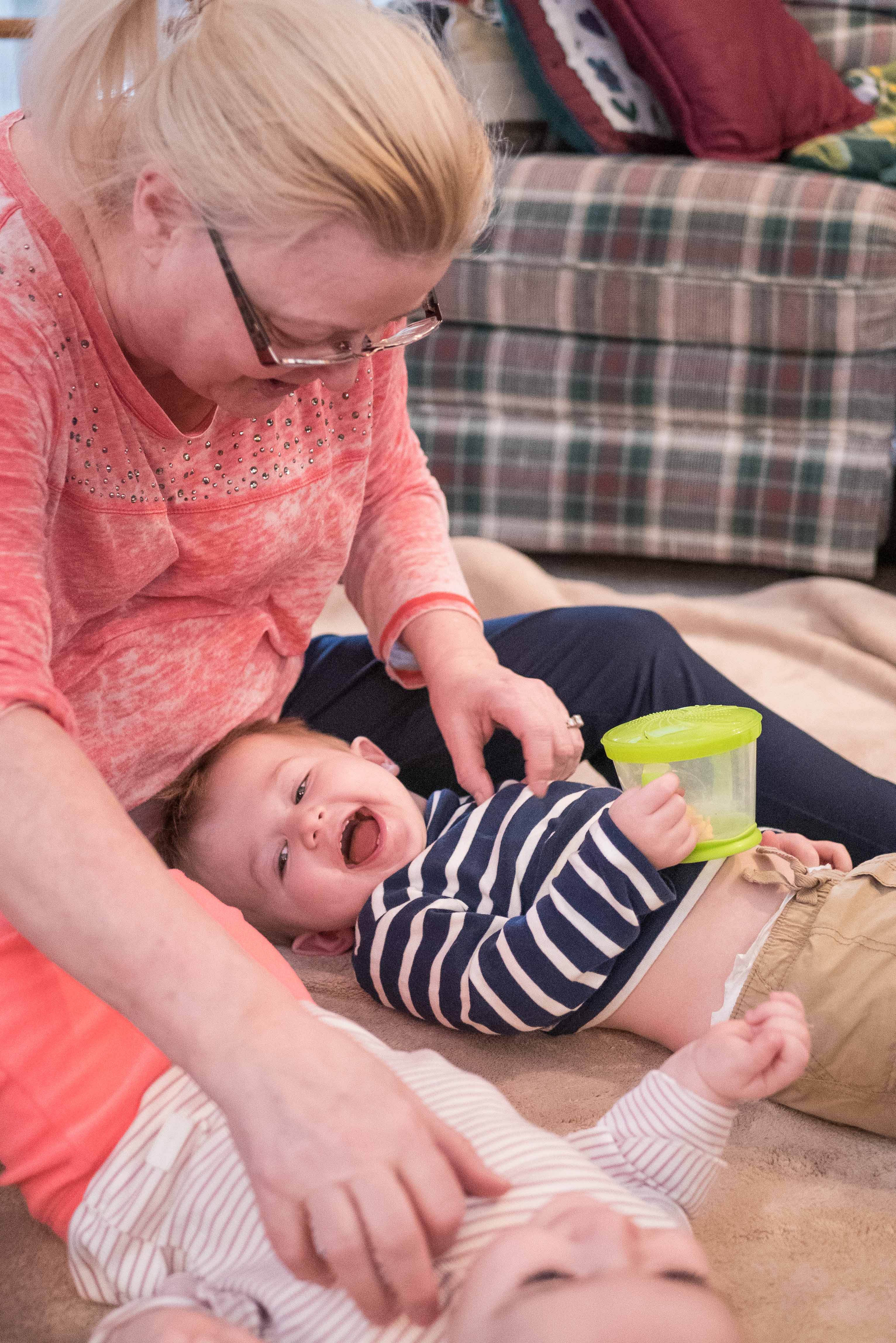 Family time this past month has included dinner with Aunt Katie and her boyfriend, an evening with the grandparents and Aunt Katie while Jake and I enjoyed a kid-free dinner out for my birthday, a day trip to Chicago to see Uncle Rob and the other grandparents while Rob is back in the States, and a birth family visit.