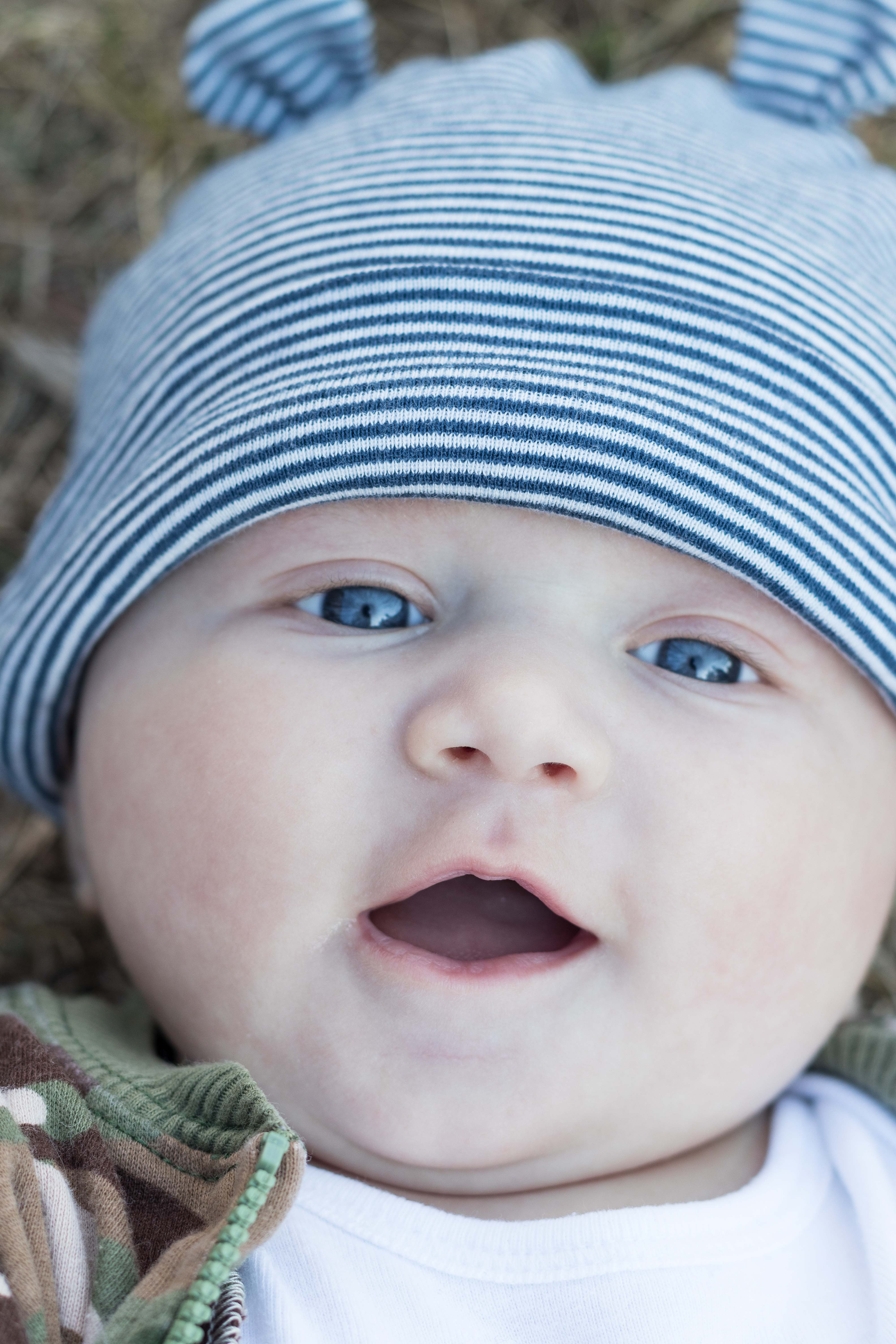 We don’t have to go back to the doctor until the four month mark, so I don’t have an updated weight and length for Tommy. He’s been right at the 50th percentile for both weight and length, which most likely puts him at 15 pounds and 24 inches long right now.

Tommy remains a super chill baby and isn’t very fussy or picky. The only things he really doesn’t like are getting his nails clipped and getting out of the bath. He loves the bath but hates getting out of it. I’m not sure what changed with the baths this past month because he was doing okay at two months. I’m hoping it’s just a phase and he’ll get better with the transition again at some point. 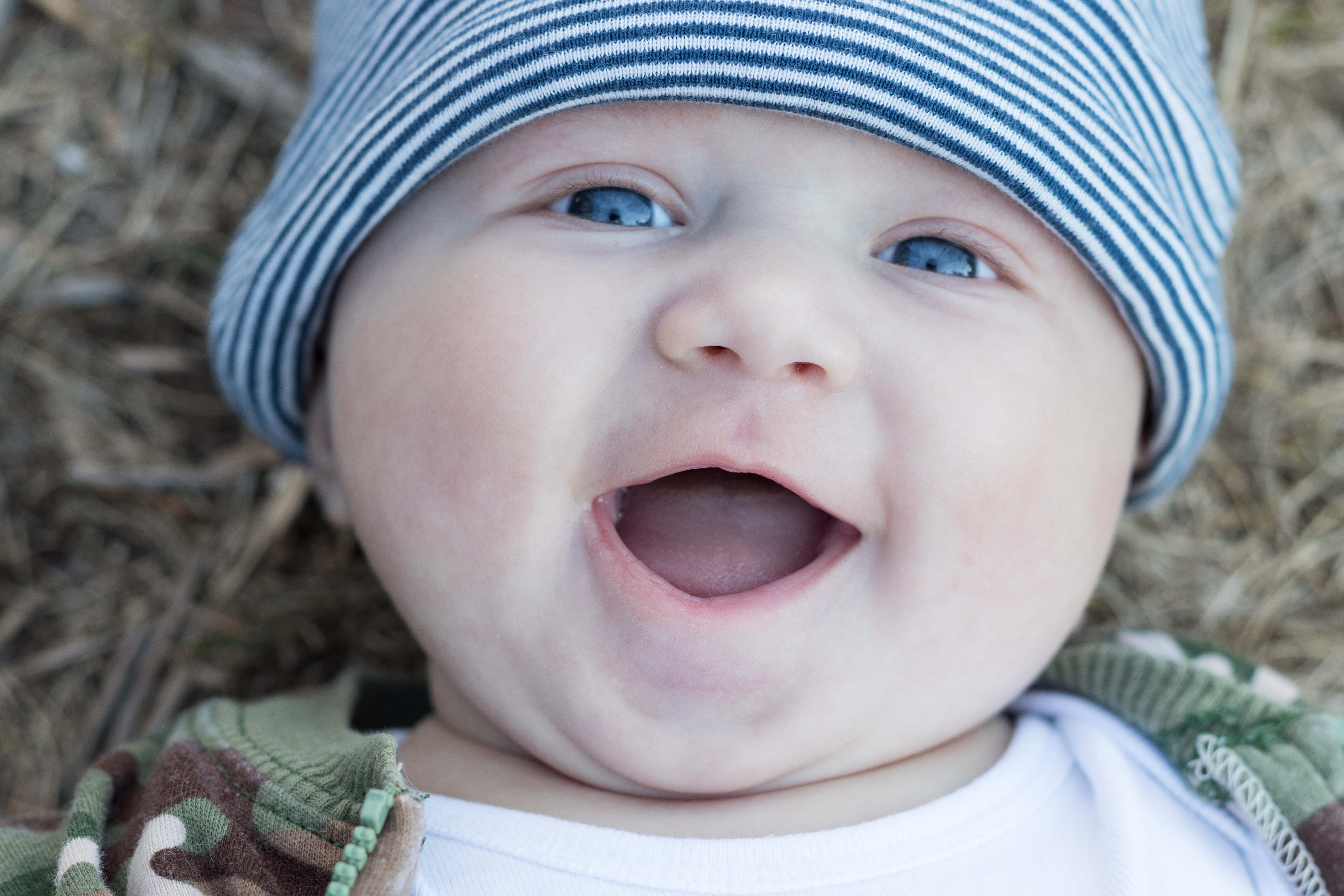 Tommy is giving us social smiles and talking every single day, and we can’t really get enough of either. Sometimes he’s just testing making different noises while other times he’s really trying to participate in a conversation. He’s figured out he’s controlling his hands and will make fists and study them when they’re right in front of his face. Tommy doesn’t quite do full on laughing yet but we get occasional baby chuckles, which is pretty great, too.

Tommy is improving his focus more and more every week. He looks at anyone who comes over to him – family, at church, at restaurants, etc. He’s also started to focus on other items, including small stuffed animals and books. He’ll grab his blanket, stuffed animals, and items hanging in his activity gym and bouncy chairs. He loves when we sit with him and read short books. While Tommy hates tummy time, he does well sitting on someone’s lap to work on his head skills. He can’t sit up independently yet but is getting closer every day. 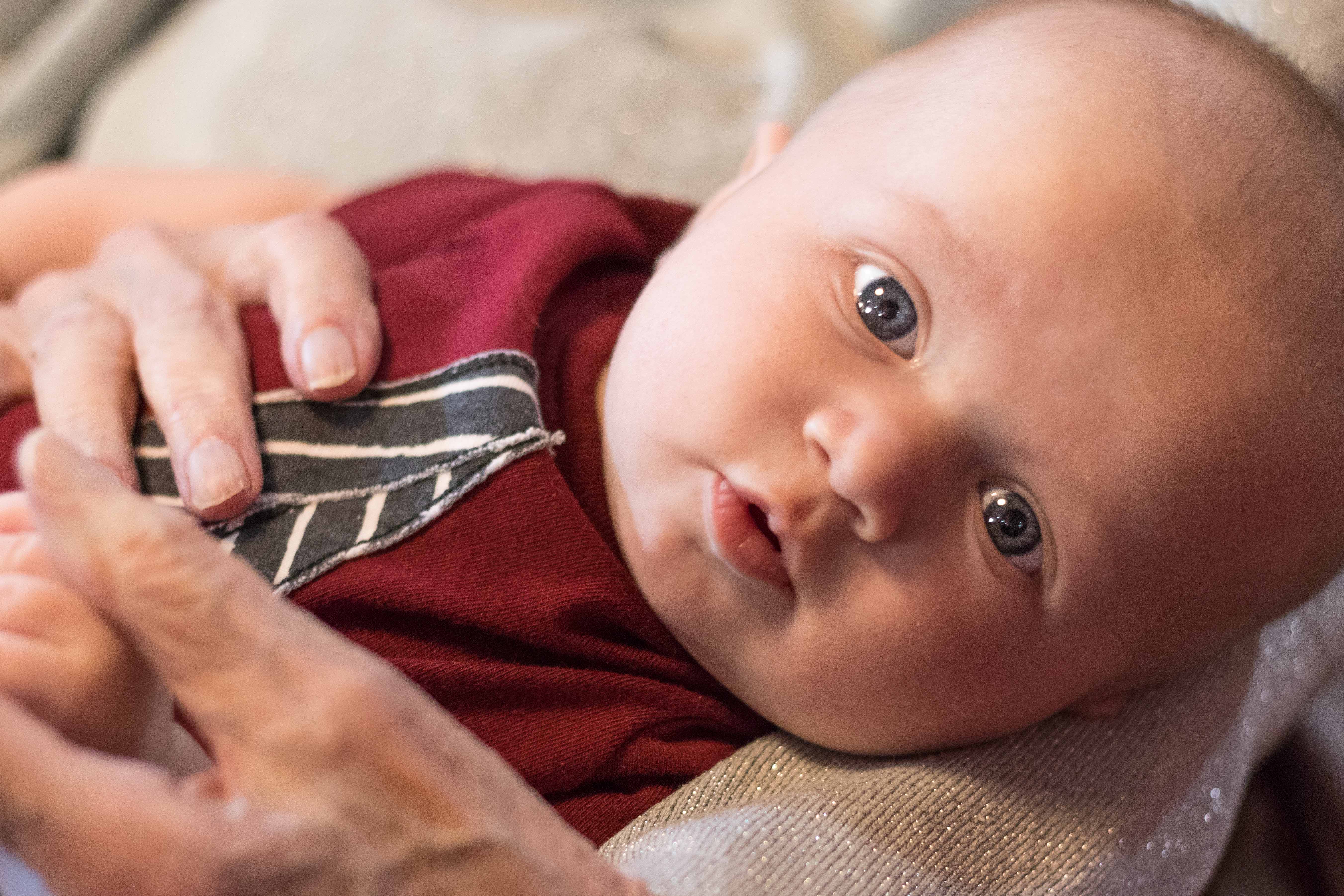 The biggest event for Tommy this past month was my cousin’s wedding in Milwaukee in mid-September. We got to spend time with my parents and mom’s mom, all of whom have met Tommy before. He got to meet two of my cousins (I only have three cousins and he actually met the third one over the summer), both of my mom’s brothers, and quite a few other extended family members. The necktie outfit was a hand me down from friends. Tommy also wore it when Jake’s middle sister got remarried on Tommy’s one month birthday.

Tommy remains a champion sleeper, sleeping his longest stretches at night. A few weeks ago, he was still waking up once at night, usually around three or four in the morning. Now he’s consistently sleeping through the night from 10:30/11:00 p.m. (sometimes a little later) until 8:00/8:30 a.m. Depending on when he went to sleep and what we have going on in the morning, he’ll often sleep a couple more hours in the morning. 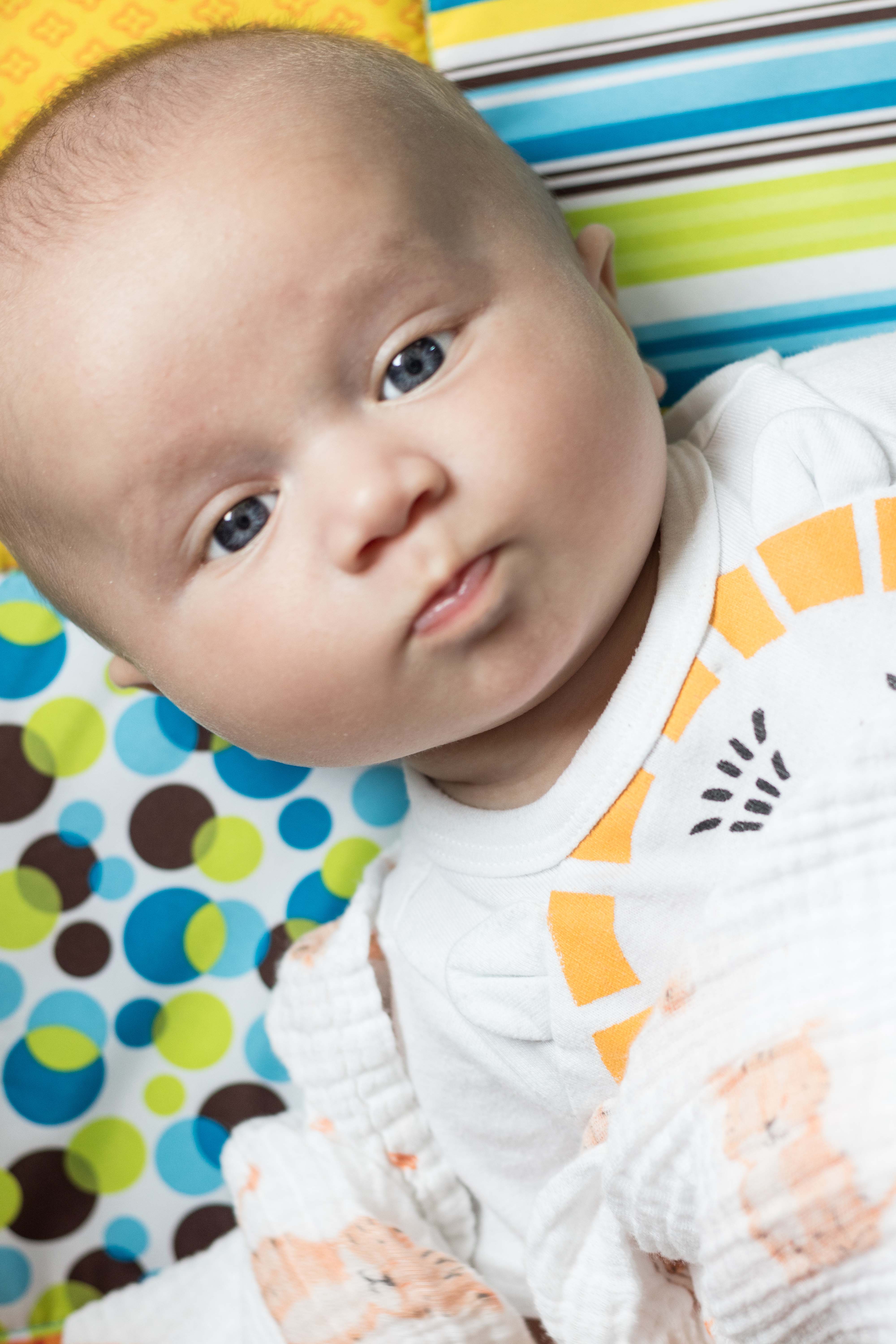 Tommy is also a champion eater, which largely contributes to why he’s sleeping so well at night. He eats 3-4 ounces every 2-3 hours during the day and 4-5 ounces first thing in the morning.

Tommy is solidly into three month clothing now, wearing three month onesies, pants, shirts, and jackets. We’ve been gifted a few larger (9-12 months) hats, which already fit him. Of course, for the most part, it’s been too warm for hats (no complaints!), but he’s wearing the bigger hats (like the one in the pictures in this post) because the 0-3 month hats are already way too small. Tommy just transitioned from size 1 to size 2 diapers. He still keeps his feet uncovered as much as possible. 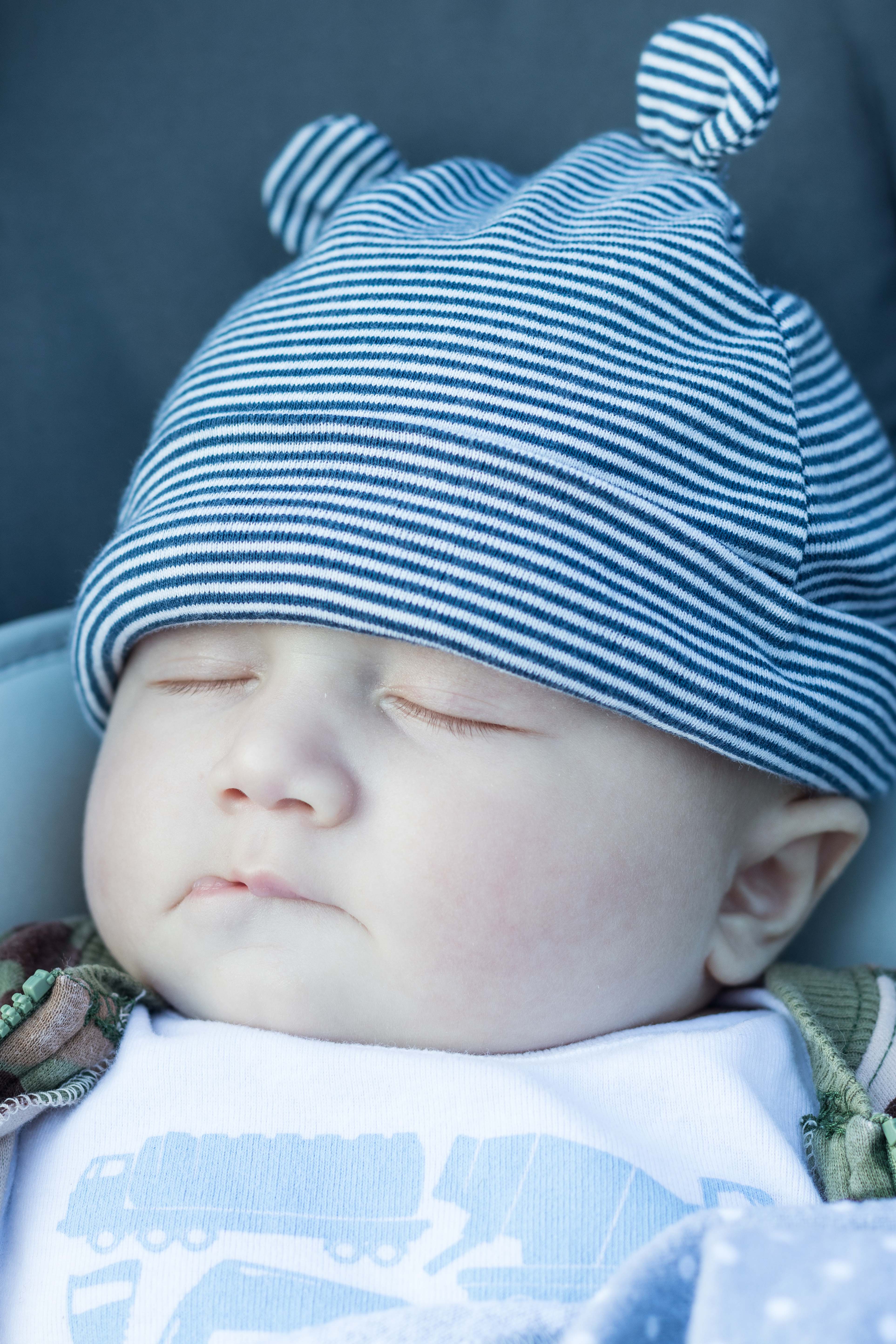 The more Tommy is able to interact with us, the more we feel like we’re getting to know him. We’re so excited for all that the future holds with him.

3 thoughts on “Three Months of Tommy”