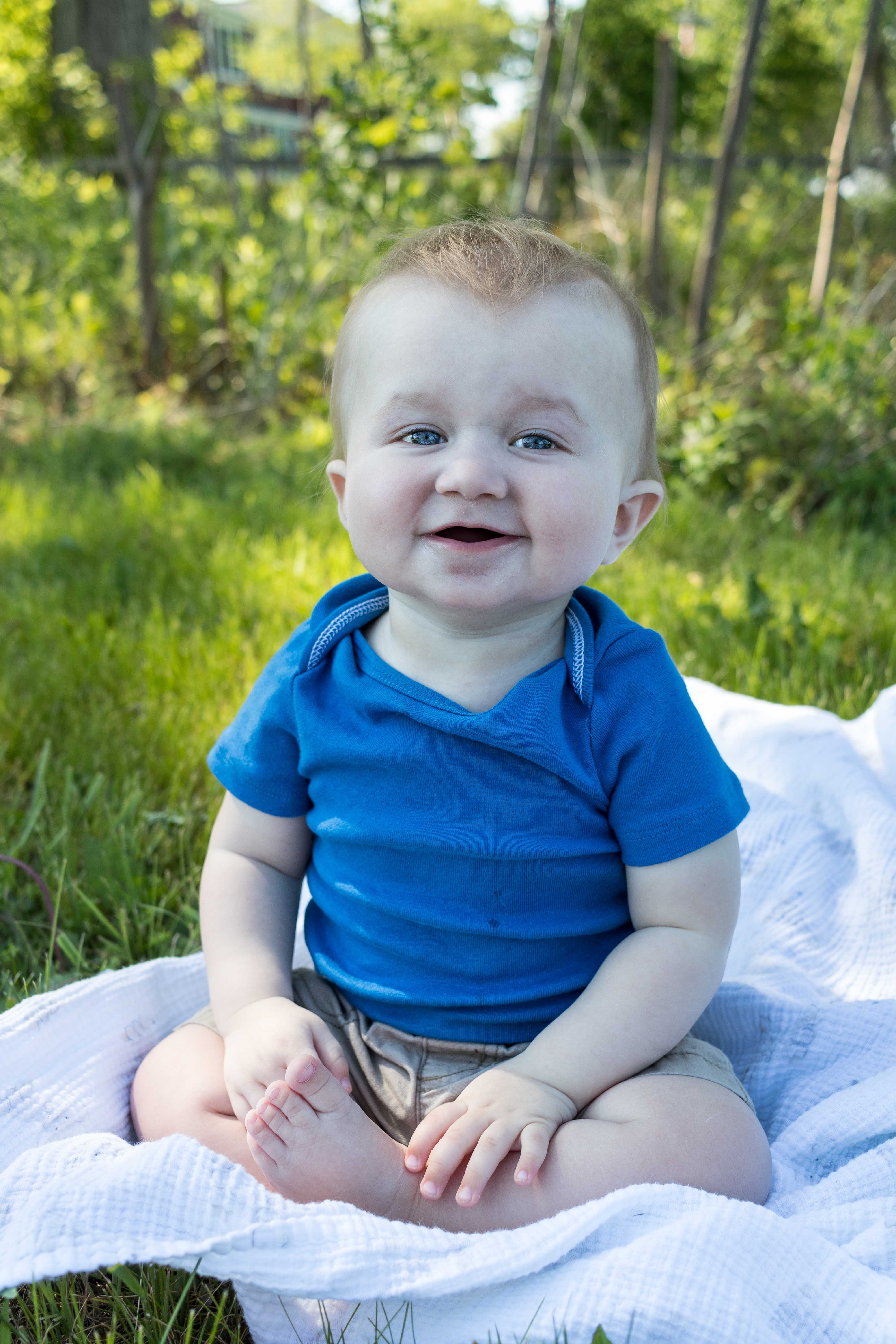 Tommy turned 11 months old this week. Our at home measurements came in at 19 pounds and 6.4 ounces and 29 inches long. We’ll get new percentiles at his one-year doctor’s appointment next month.

The biggest milestone from this past month is that Tommy is crawling! Once he was ready to start crawling, he transitioned from rolling everywhere to crawling everywhere in just a couple of days. He does an army-style crawl and is getting faster with his crawling every day. Working on his crawling skills has also helped him build the skills to sit up independently. He backs into a sitting position from his stomach. 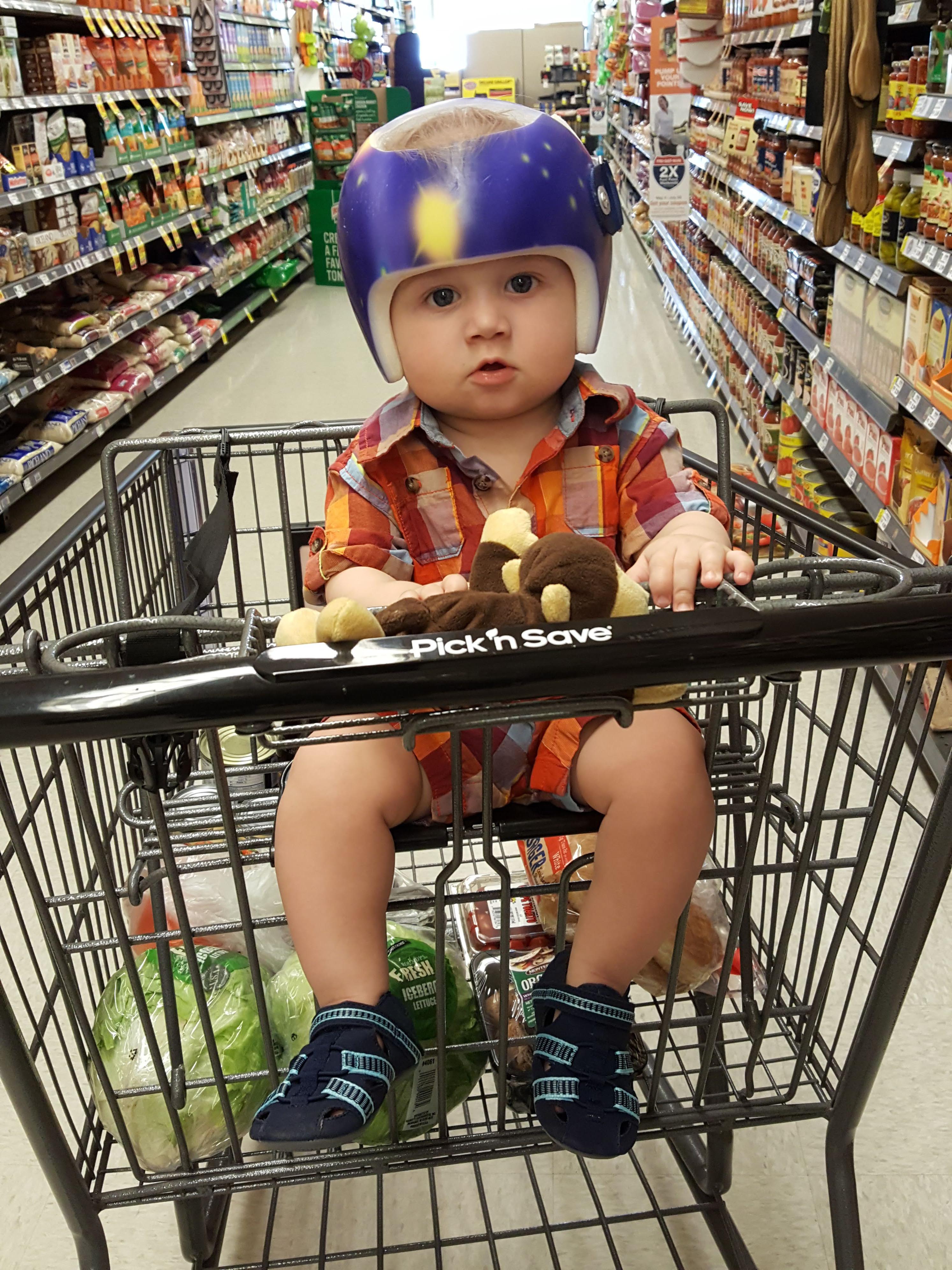 Over the past couple of weeks, Tommy has started pulling himself up independently. He stands confidently on his own for long stretches of time, sometimes as long as 15-20 minutes. He will stand happily just about anywhere you set him up and especially likes his LeapFrog musical table, water table, and edge of his pack ‘n play. He can let go with either hand and reach for items while he’s standing. He can also lean against a surface and use both hands for a few seconds at a time.

Tommy’s continuing to build on his ability to imitate sounds accurately and match pitches. He roars, clicks, and blows raspberries all the time. Tommy loves waving and is waving hi/bye somewhat consistently. He also loves clapping. Again, building from the past month, Tommy understands a lot of what we tell him (i.e. yes, no, be careful) and picks up a lot from the inflection in our voices. 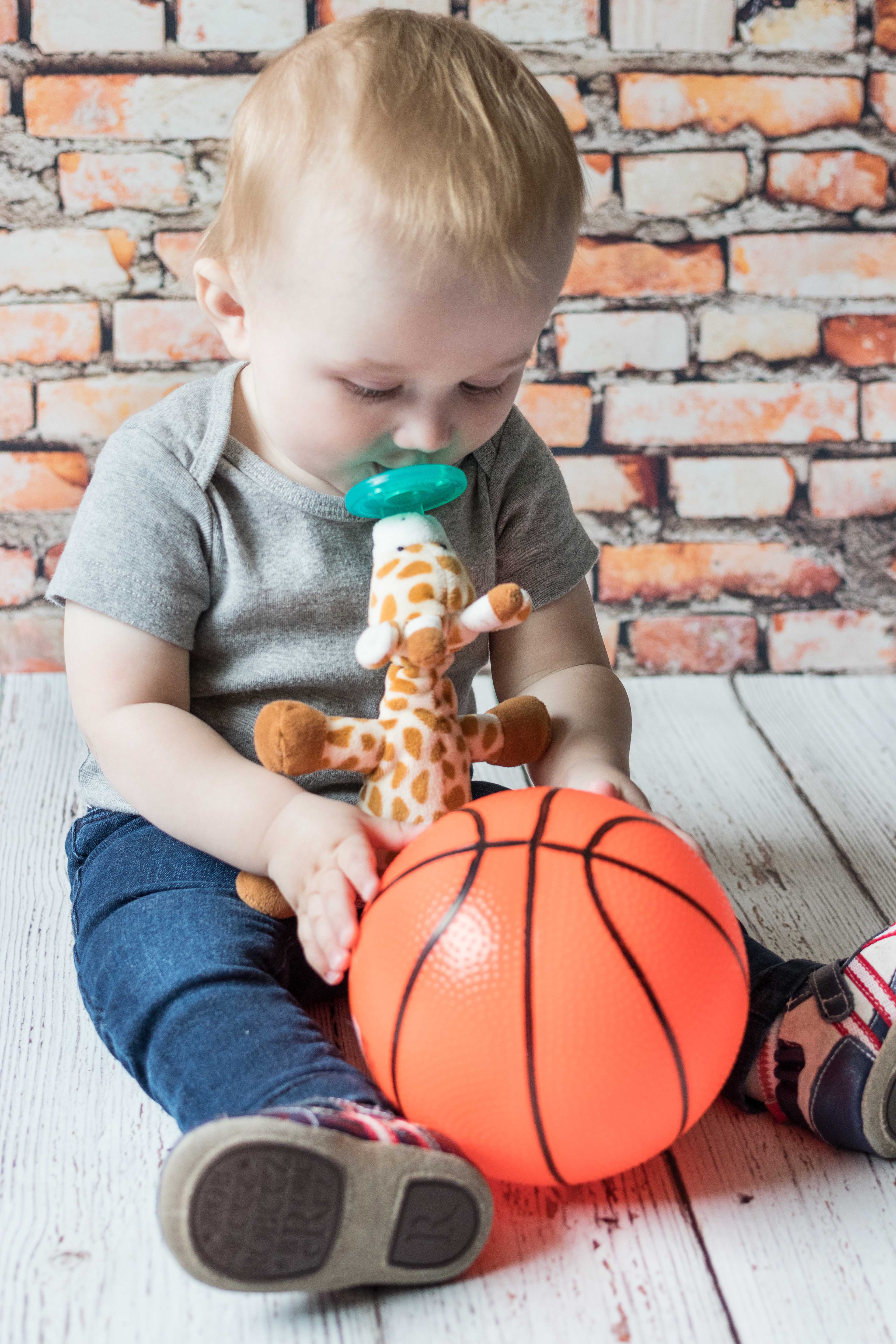 Now that Tommy’s crawling, we have to re-direct him on a regular basis (i.e. don’t touch the cord, move away from the stairs). He does a surprisingly good job listening and taking our directive without us having to re-direct him physically. Tommy isn’t afraid to pull out the charm and give us a huge smile in an attempt to keep doing what he isn’t allowed to do. Unless he’s in immediate danger, we tend to talk him through a re-direction and avoid moving him physically.

The newest favorite for Tommy this past month is ceiling fans. He is obsessed with the ceiling fans in our bedrooms and points at them every time we enter the room. He points at many other objects at well and loves when we talk to him about whatever he’s pointing at or engage with him by touching fingers. Tommy’s other favorites remain largely the same from last month. He loves spending time in his high chair, Baby Einstein, Exer-Saucer, and Pack ‘n Play. He frequently plays with percussion instruments, his Vtech sit/stand farm toy, Fisher Price farm animals and Noah’s Ark animals, any and all paper, and anything that makes noise. Tommy loves looking at books, especially board books with touch elements. 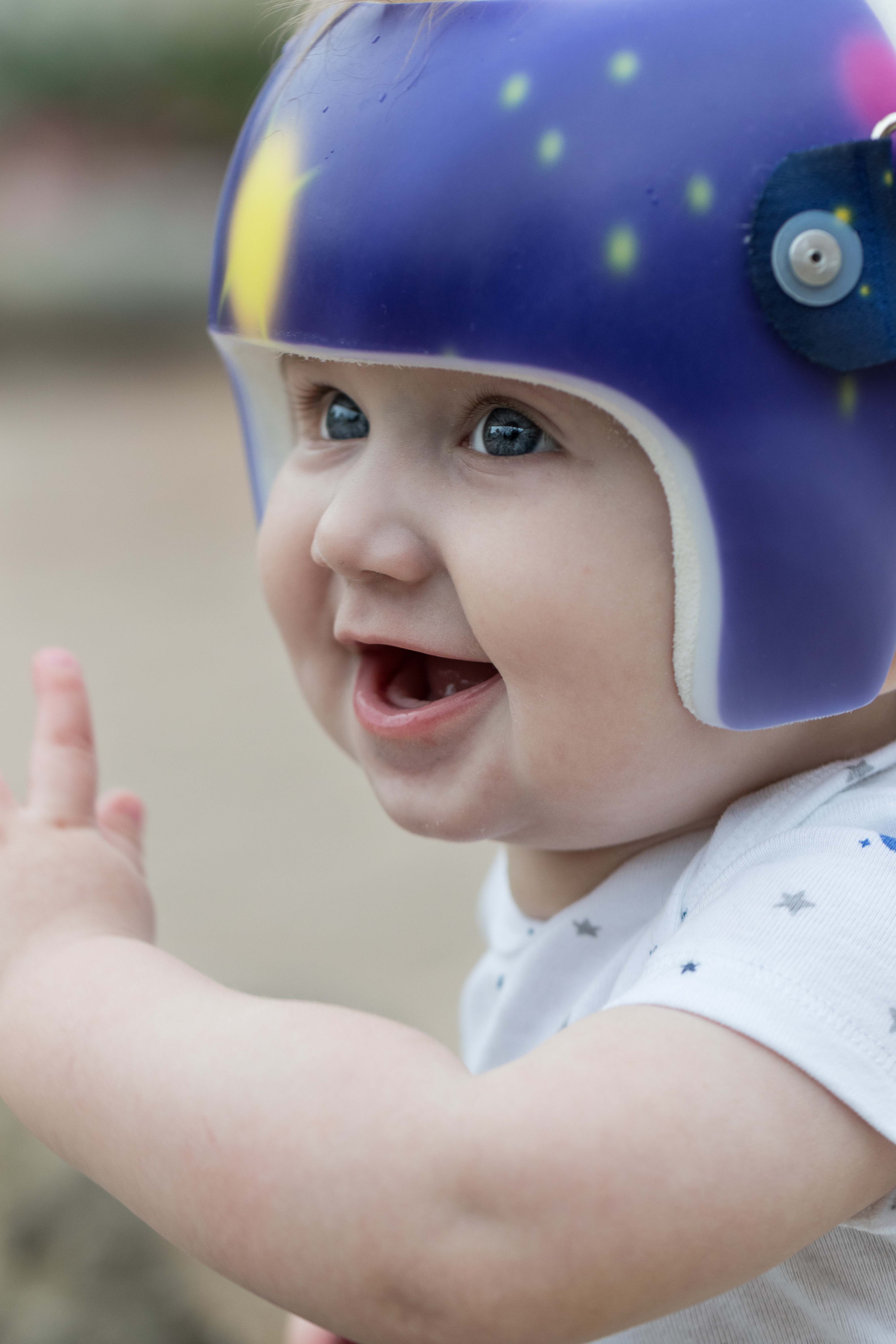 Another major milestone for Tommy this past month is holding his own bottle. I pushed him on bottle holding a little bit last month and was met with such resistance and drama that I quit. The past few weeks, he’s come so far with bottle holding. Tommy still does best reclining to bottle feed, as it’s tough for him to hold the bottle upright. But he will hold the bottle while you sit with him or will sit in his bouncy seat and hold his bottle almost every time now. Tommy can even hold the bottle in one hand (freeing up his other hand to touch his hair, still his favorite way to self-soothe). He’s continuing to take four 7-ounce bottles per day, spaced 3-4 hour apart, which seems to be where we’ll tap out for daily formula capacity.

In addition to formula, Tommy eats a combination of baby food and regular food every day. A ton of people have asked me if I’m doing baby led weaning. While we aren’t doing a lot of spoon-fed purees, but we aren’t doing straight baby-led weaning either (and I’ll be honest, I haven’t read any of the literature on baby led weaning, so there’s so much I can’t tell you about it.) Tommy does a lot of independent eating, but sometimes we do feed him by hand or off of a fork, especially at a restaurant. 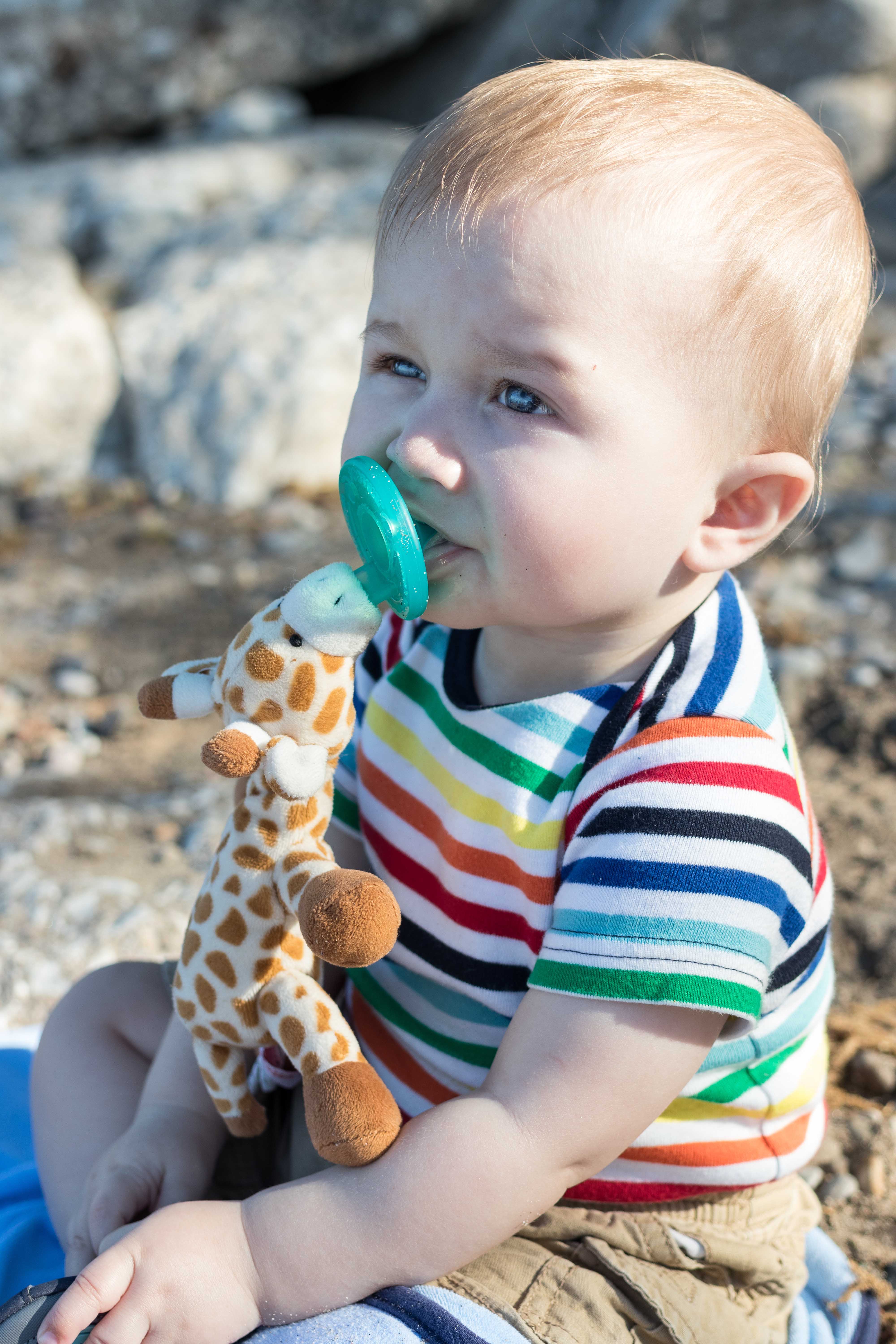 For baby food, Tommy loves puffs and yogurt melts. Gerber makes cheese puffs, which quickly became a fast favorite. We offer him just about anything we’re eating that we think he can handle with no teeth (yep, still no teeth popping yet), and he hasn’t strongly objected to any food in quite a while. We also introduced the spoutless sippy cup to Tommy this month, and he’s done great with it. He understands exactly how it works and willingly takes drinks out of it when you offer it to him. Similar to the formula bottle, it’s tough for him to hold the sippy cup upright independently.

Tommy has really come into his own this month and is so comfortable interacting with other people, which says a lot because that’s pretty much always been true. So many family members and friends have commented on how much personality Tommy has when they’ve been with him over the past month. When he’s around familiar people now – grandparents, birth family, close friends, moms’ group adults and kiddos – he’s relaxed almost right away in these settings with no initial shy period, which is a change. Tommy loves trying to get someone’s attention across the table at home or at a restaurant and will flirt with anyone who he thinks will give him some attention (i.e. at church, at a social gathering, etc.). 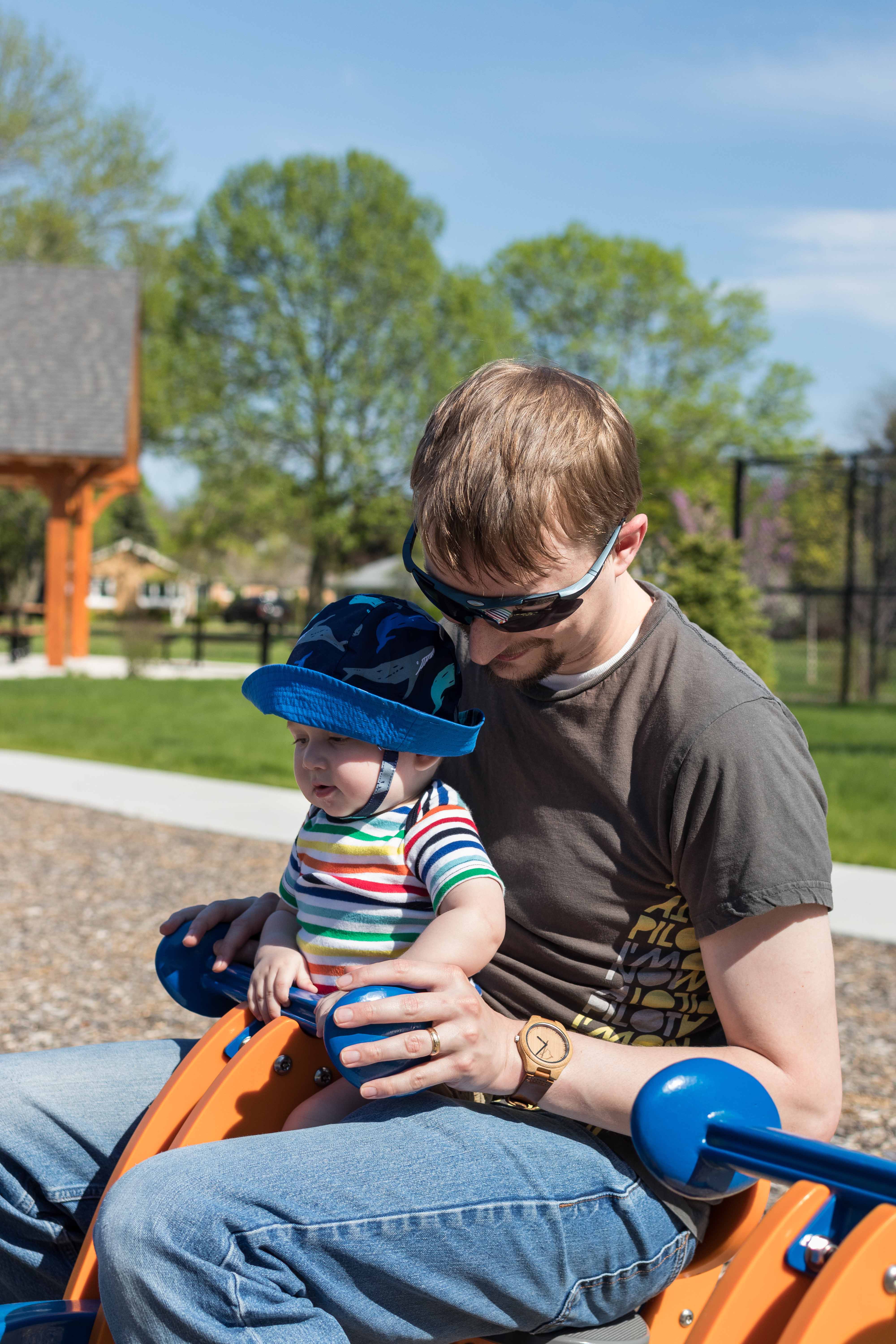 Now that Tommy is so mobile, we’re working to get him into a more consistent, slightly earlier bedtime. For months, Tommy has done great hanging out with us in our bedroom at night. He’ll fall asleep, and we transfer him to his own room. Now he’s all over the place, crawling to the edges of the bed, grabbing books, wanting to keep watching TV, etc. He’s still a night owl and very rarely goes down before 10:00 p.m. If he needs a second nap, we try to get it in before dinnertime. Around 8:30/9:00 p.m., we get Tommy into his pajamas and have him start winding down a bit, usually spending time hanging out with us in his bouncy seat or Exer-Saucer. Typically, he goes down in his own bed by 10:30 p.m.

Tommy is still wearing size 3 diapers and mostly 9-month and 9-12 month clothing, moving right into warmer weather 12-month clothes – short-sleeve onesies, summer pajamas, swim/beach outfits. Tommy’s been in size 3 shoes this spring and is starting to wear size 4 summer shoes (both sizes fit okay right now). I’ve got him stocked with size 4 and 5 shoes for summer, possibly into the fall, depending on how long size 5 fits and how long it stays warm. 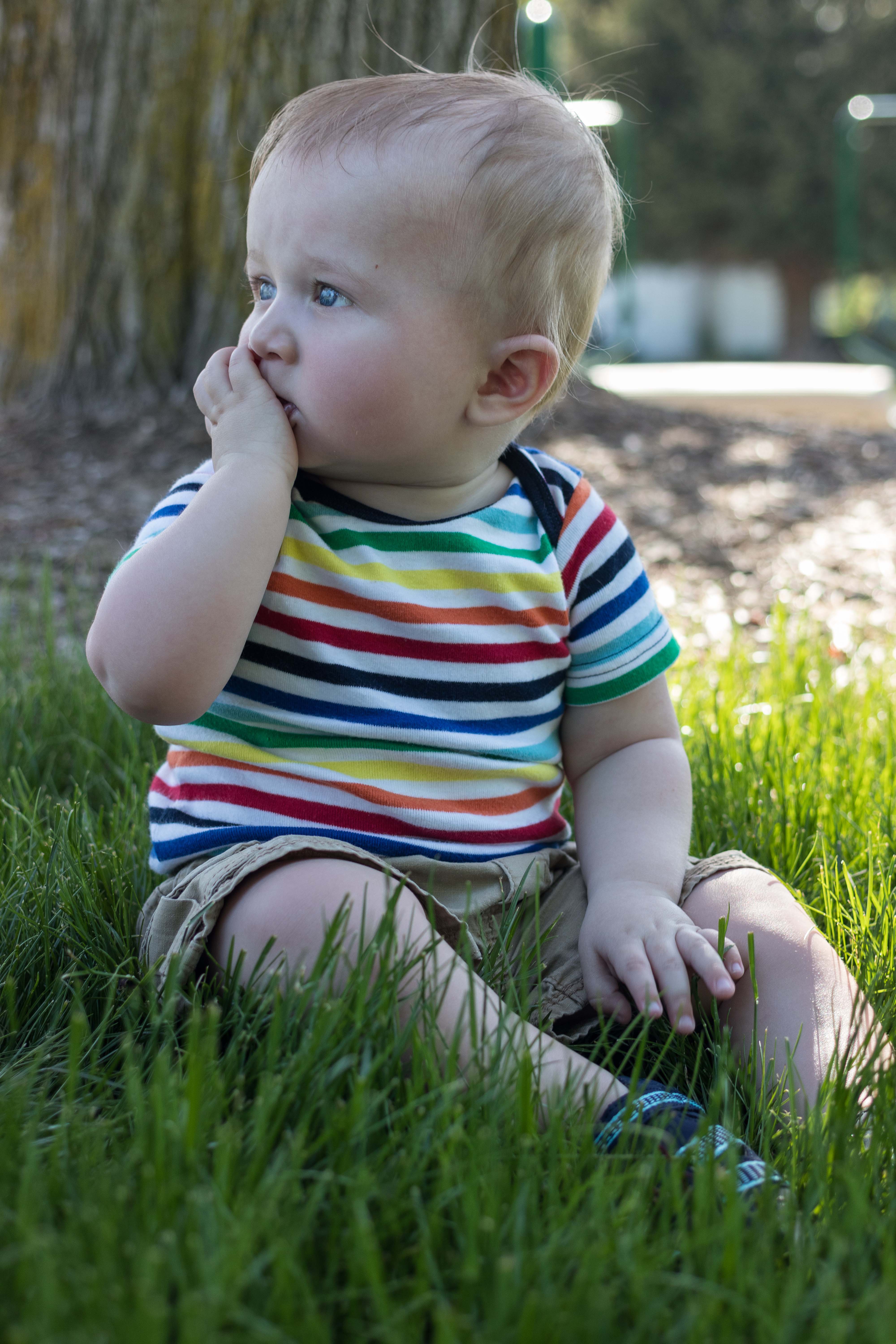 Tommy’s helmet therapy is continuing to go really well. Jake and I are in owe of how much of a difference the helmet has made in just a few months. Tommy had a helmet checkup last week, and his numbers have improved across the board. The orthotist is pretty confident that he’ll be able to be done with the helmet when he turns one in July. At this point, Jake and I so happy with his progress and are ready to be done with the helmet when the weather is warm (Tommy overheats with the helmet really easily) that we’ll be ready to call it quits by then anyway.

Since February, Tommy and I have been getting down to Chicago about once a month to see my mom’s mom/Tommy’s great-grandma, who, long story short, isn’t doing very well, and visit with my parents. Seeing Tommy always puts a smile on her face, and having new visitors join my parents helps mix up their daily visits. 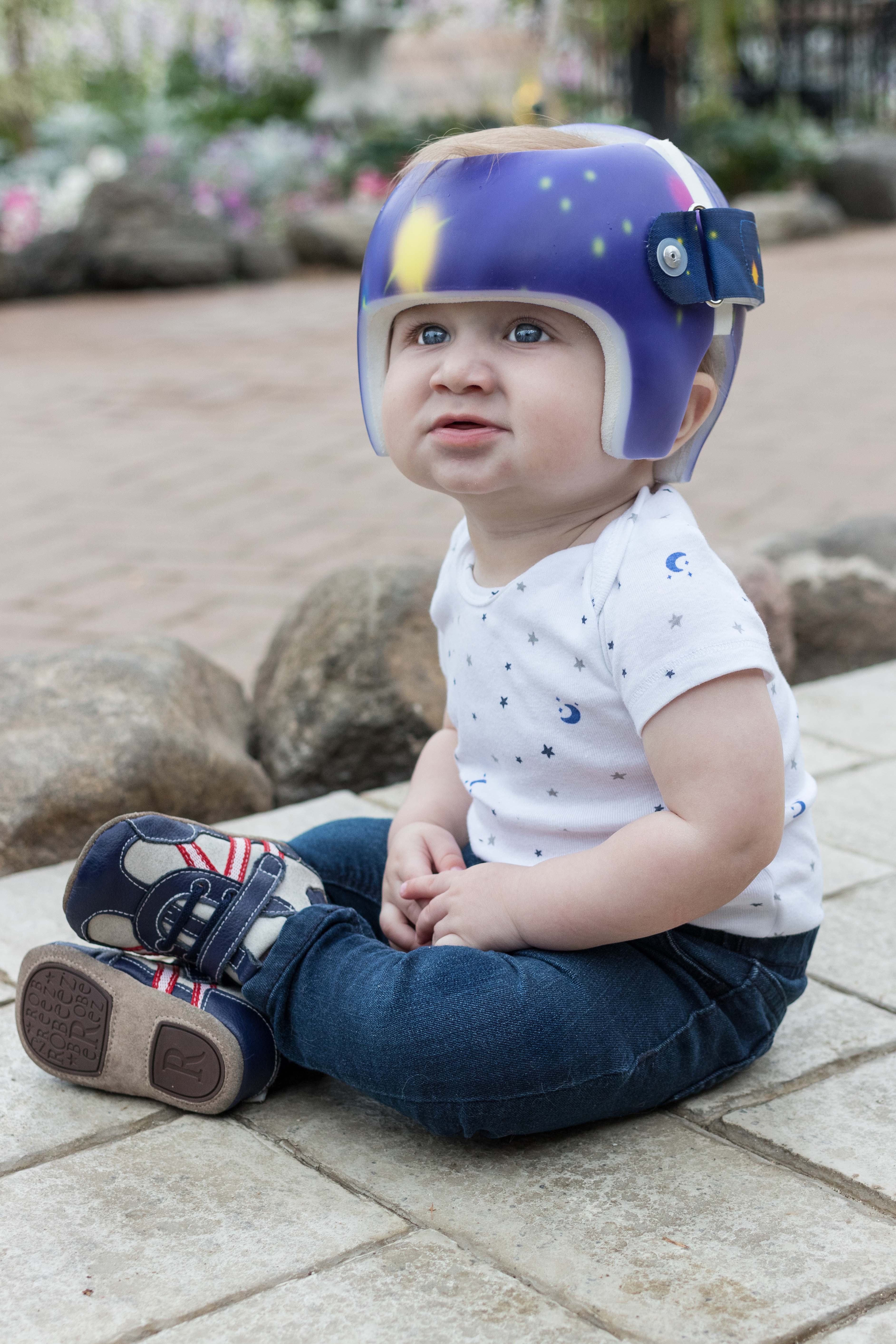 This past month Tommy and I went to the spring floral show at the Domes. 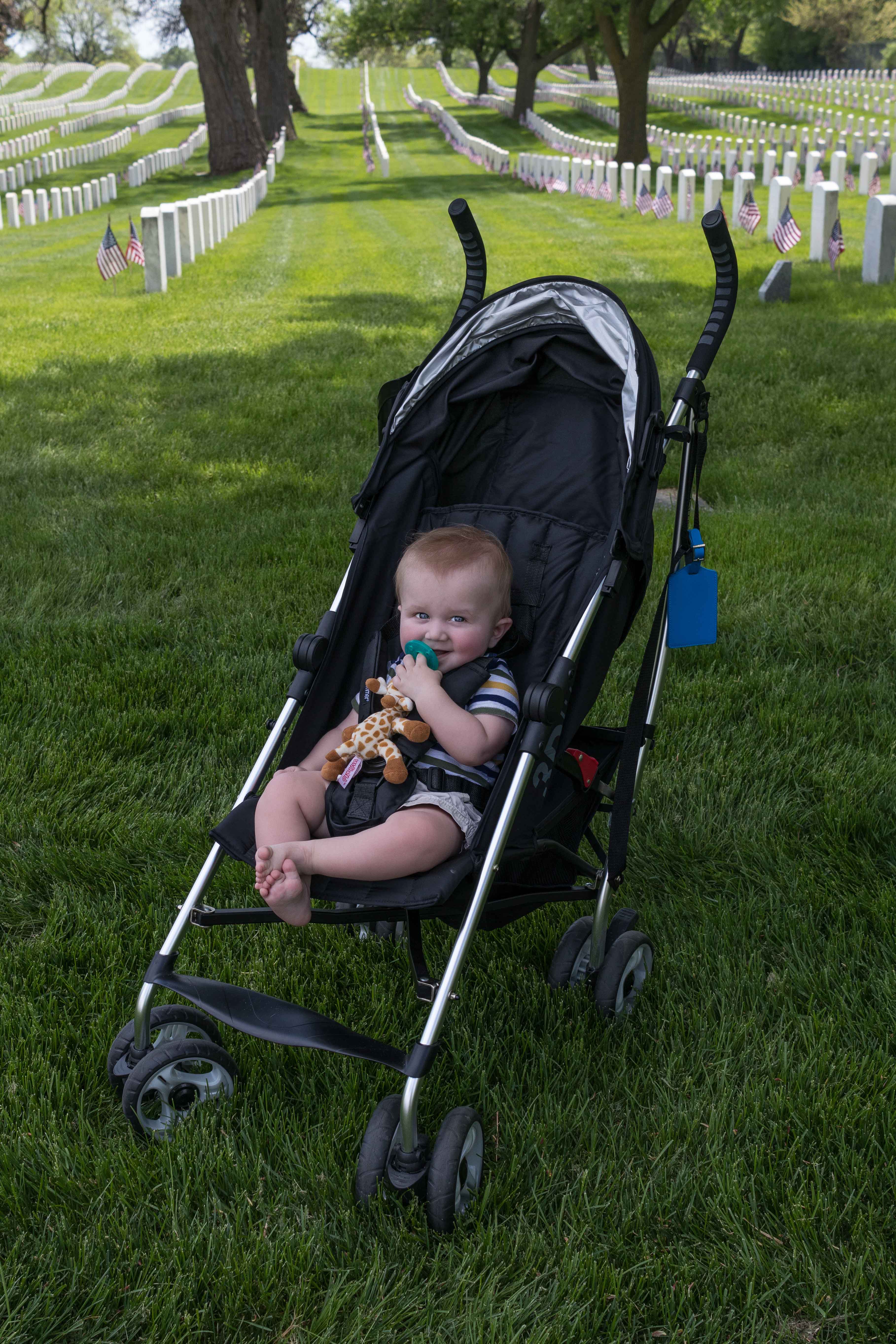 I also took Tommy with me to the VA grounds in Milwaukee for Memorial Day. 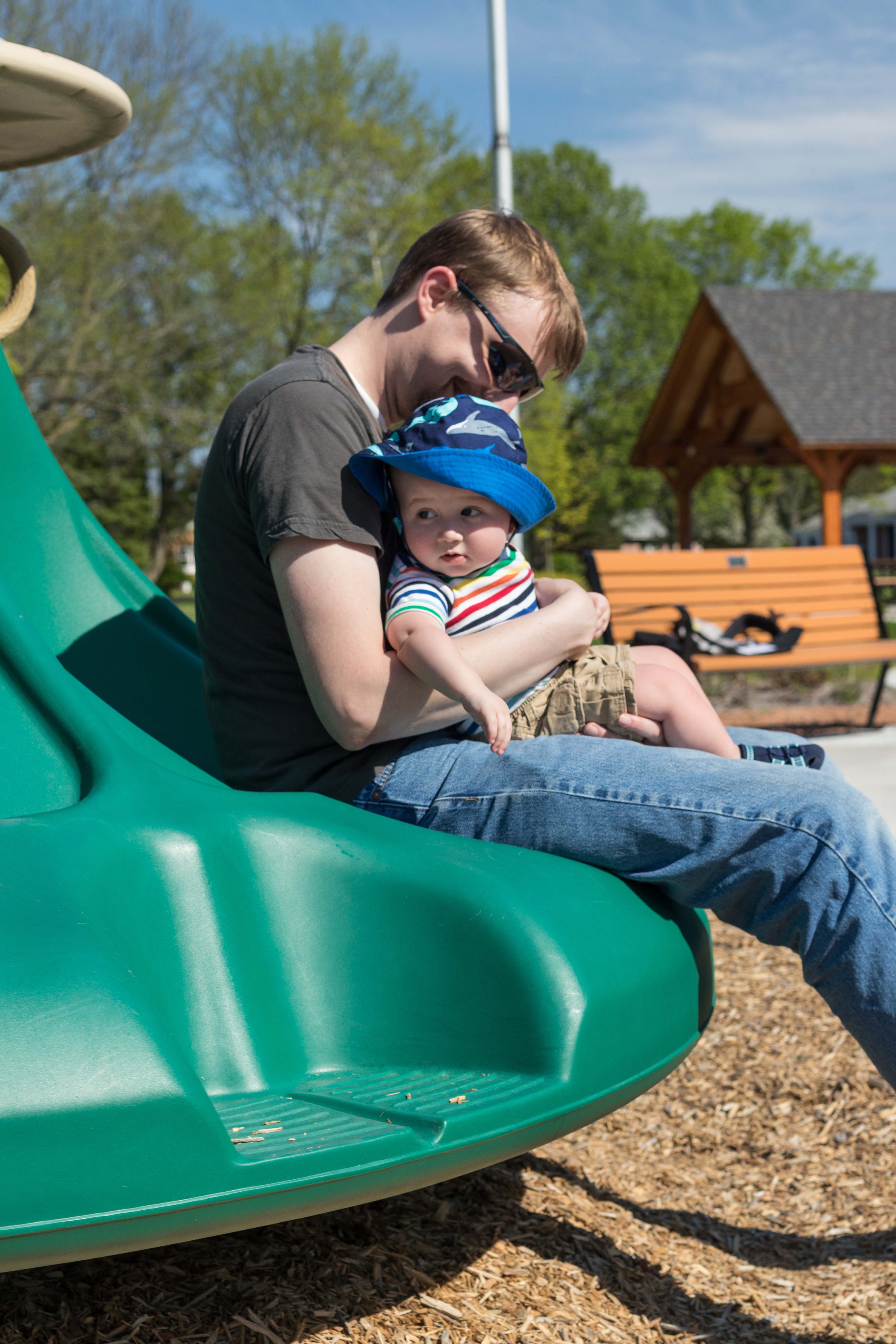 We had a wonderful Memorial Day weekend, spending lots of time outside with family and friends. Among other things, Tommy got to try out new playground equipment with Dad. 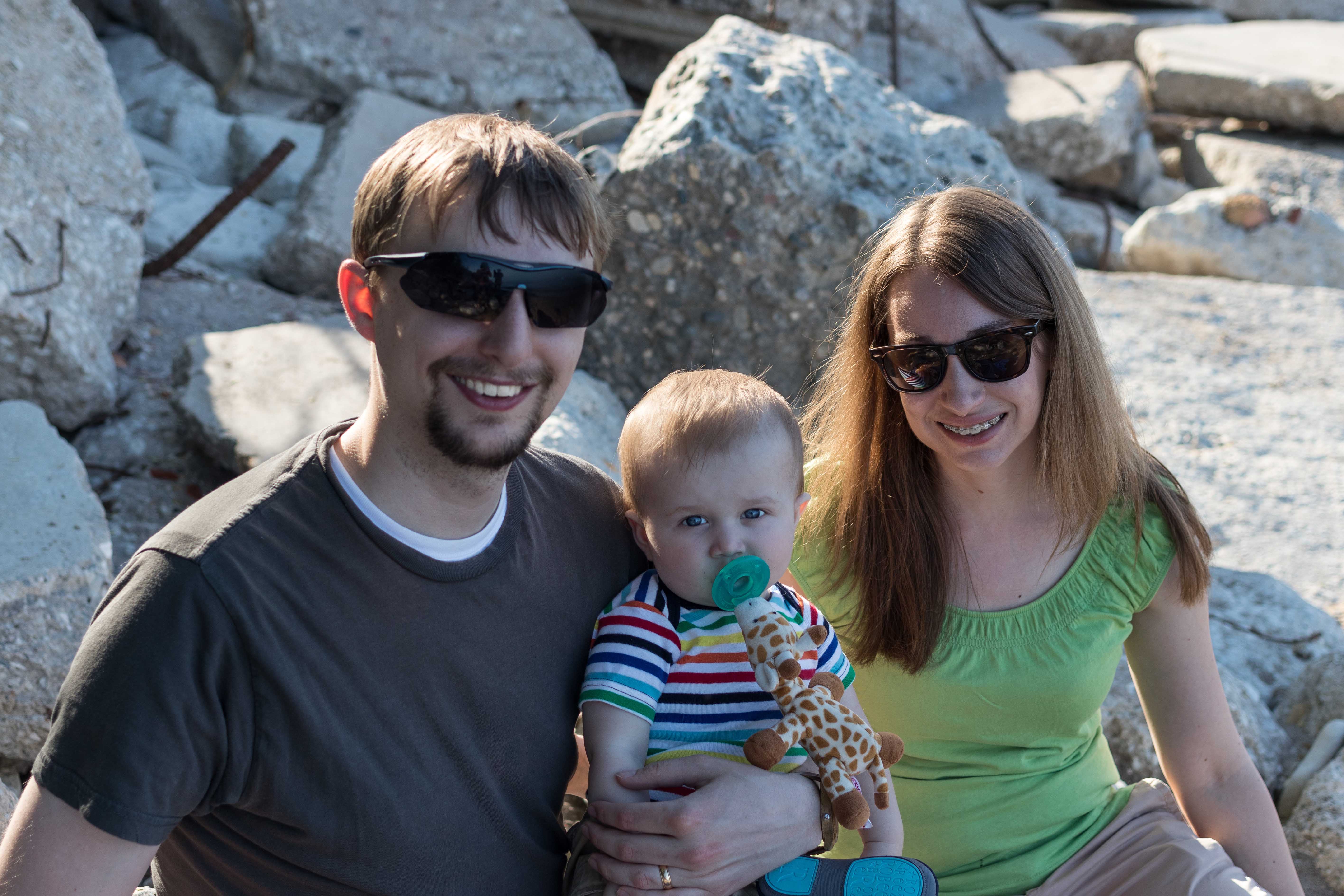 A friend was so nice to snap a picture of the three of us at the beach over Memorial Day weekend.

I try really hard to limit my own commentary in my Tommy update posts. But I’m feeling all the feels as we approach Tommy’s first birthday. This time last year, we were just getting back from our ten-year anniversary trip to Europe. We had no idea that in just a month, we’d be meeting Tommy. I’m still in shock that we’re thinking about baby #2 now. I’ve been so caught up in planning Tommy’s first birthday and working on nursery #2. Sometimes I need to take a step back and say, “HEY, remember how this time last year, you were still trying for baby #1?” I can’t even believe we’ve made it this far and am beyond grateful to be at this point. 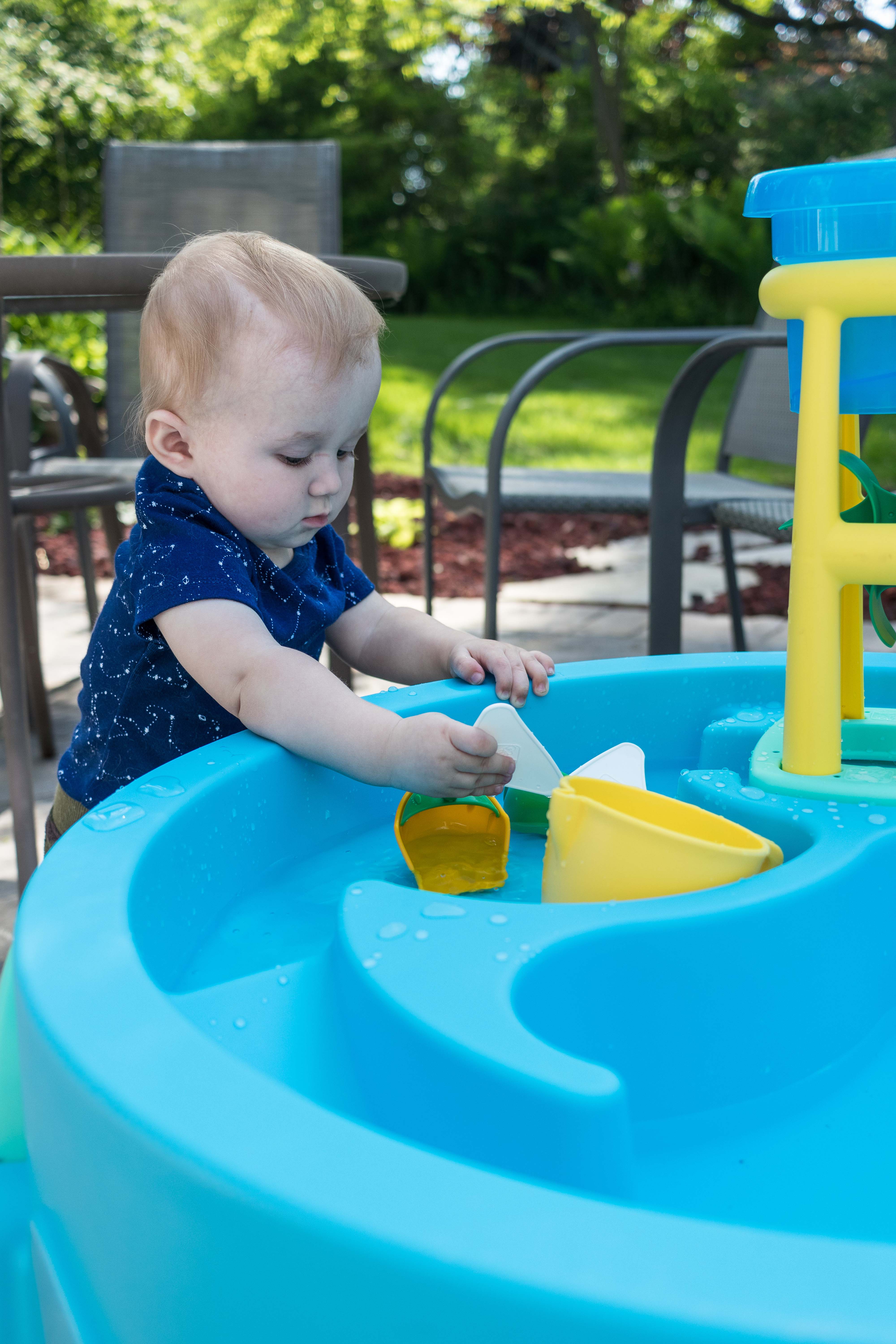