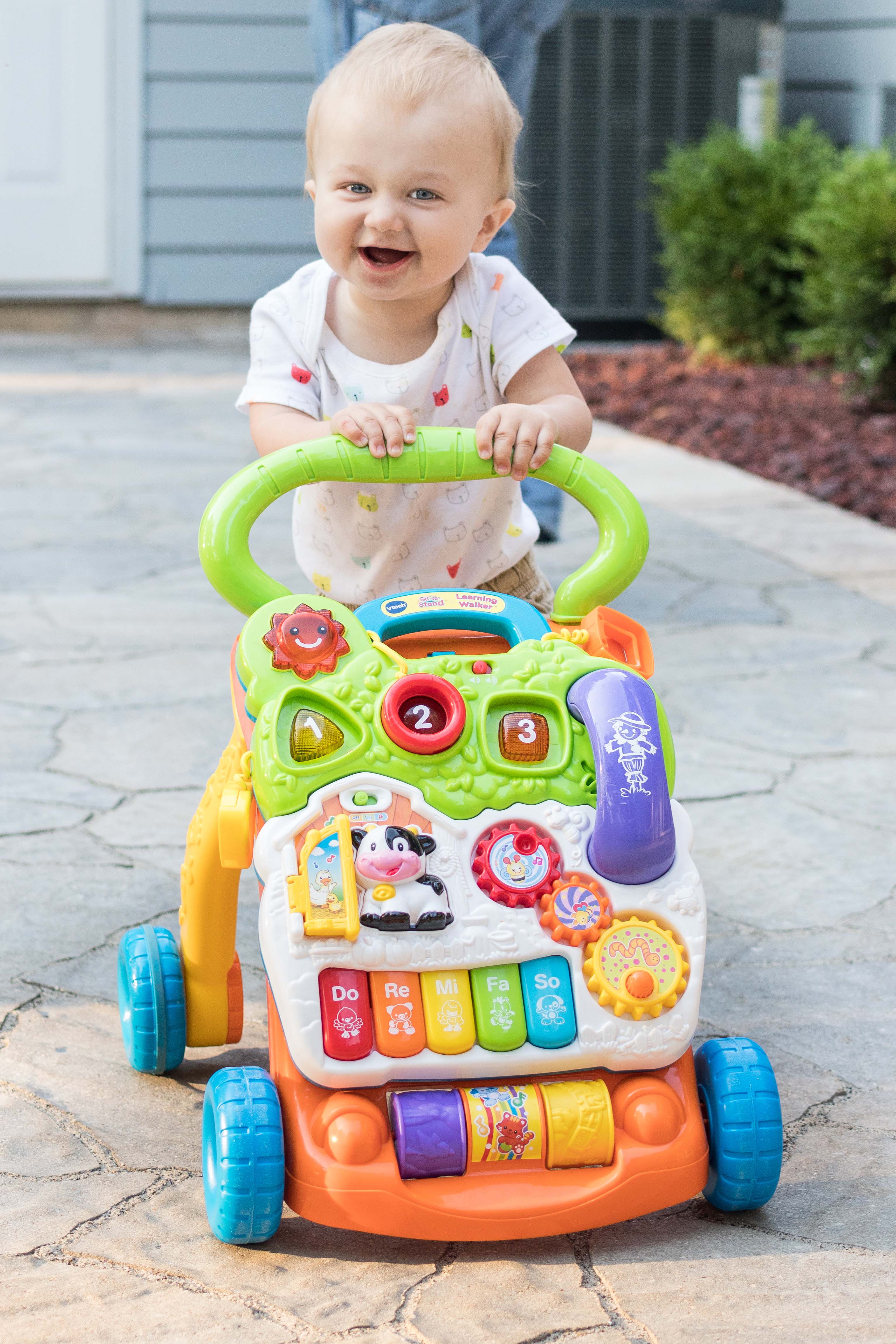 This past week our Tommy turned 13 months old. Now that he’s going to the doctor every six months, I’ll only be giving weight and height updates following an appointment. As he’s weaning off formula, we aren’t likely to see the huge gains each month that we did for his first year.

A few Tommy development highlights from the past month: 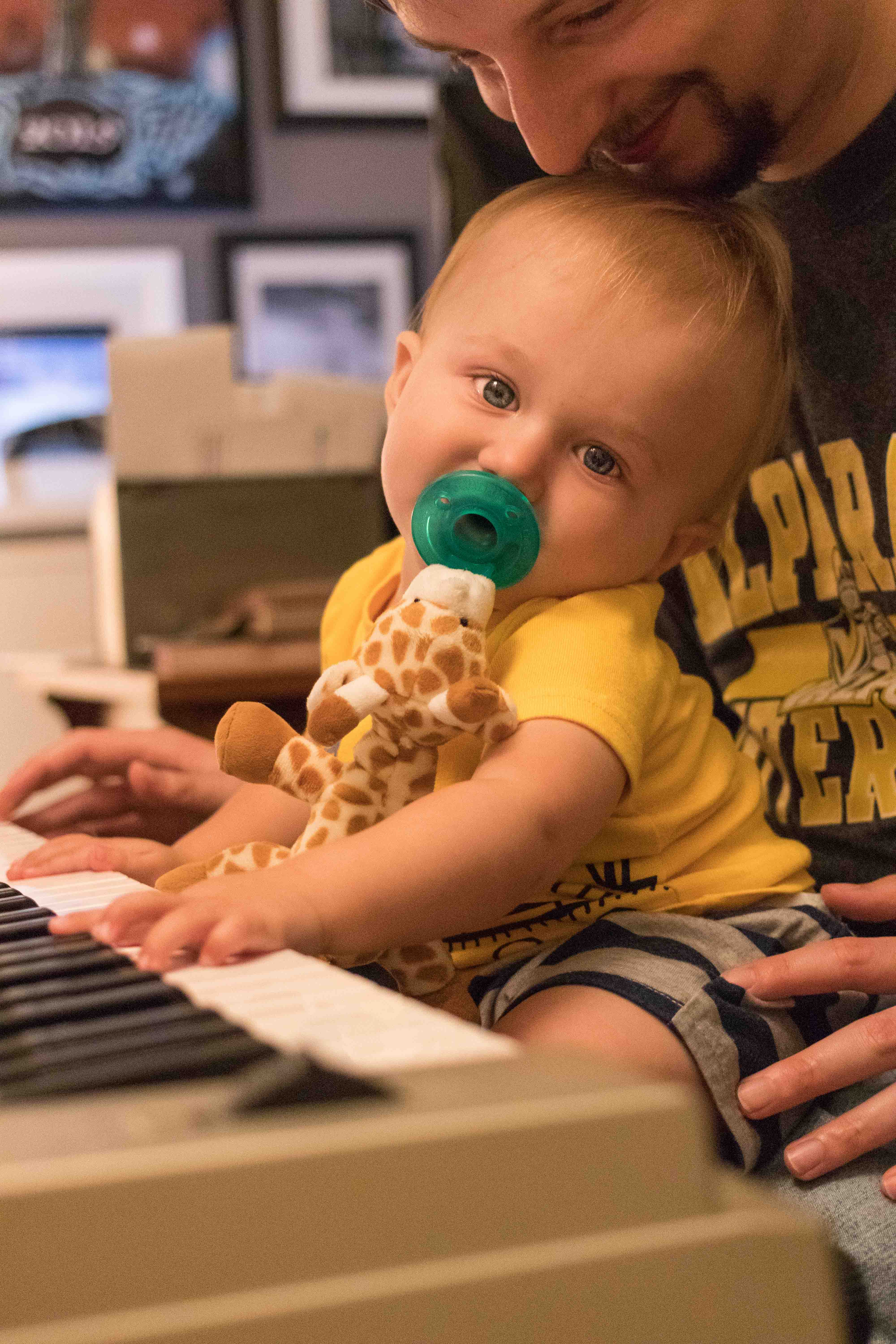 One of the funniest things to me about this age is how many people are anxious for their toddlers to talk, so they can get some insight into what they’re thinking. Of course, I’m looking forward to Tommy learning to talk as much as anyone. But the vast majority of the time, it’s pretty clear what he’s thinking, feeling, wanting, needing, etc. We’re not left wondering “that didn’t solve the problem, what do you really want?” or “I can’t tell what you’re pointing at.” Nine times out of ten (if not more), when Tommy is communicating, either verbally or non-verbally, it’s very clear what he’s trying to say. Is this unusual at this age? I honestly have no idea.

We are using up the last of our formula, adding 2 oz. to bottles with 3-5 oz. whole milk. Tommy has done a great job transitioning to mostly milk bottles. As he’s still far more comfortable using his bottles than his sippy cups, we haven’t tried milk in a sippy cup yet. We are working to make slightly smaller bottles than he needs to fill him up at least once or twice a day and then supplementing with a mix of baby food (i.e. puffs, yogurt melts) and regular food, so he gets used to taking in more calories through regular food.

Hands down, Tommy’s favorite food this month has been blueberries. He has eaten a crazy number of blueberries. He has also really enjoyed chicken pot pie and sloppy Joes. Thus far the only regular food Tommy has flat out turned down is lettuce, which he did try before rejecting. He is also not crazy about the texture of strawberries or peaches, although he loves strawberry and peach flavored yogurt melts. 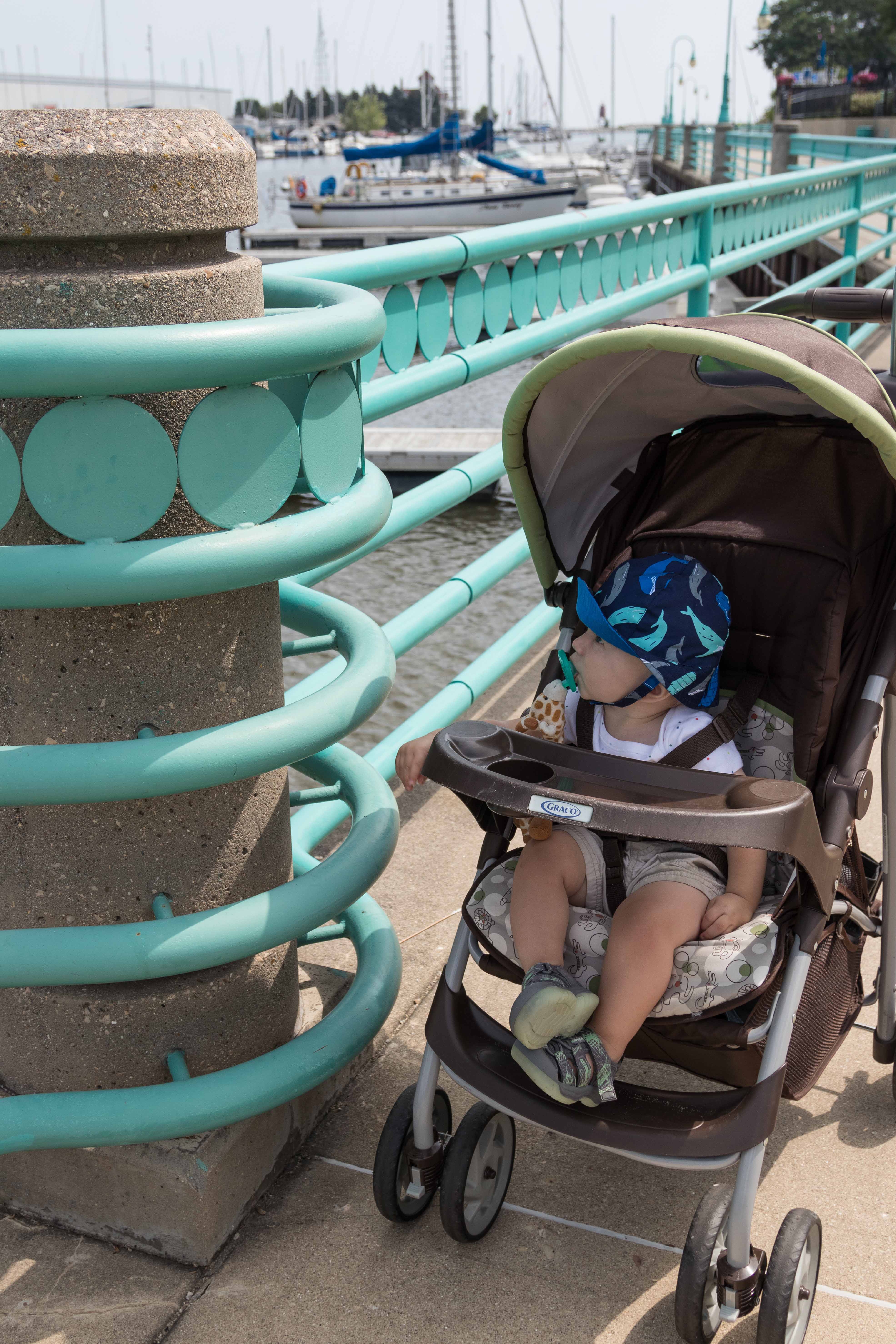 In classic toddler form, going down for naps and bedtime is often a bit of a struggle. Tommy is sure that he’s not ever tired and often cries for a few minutes in his crib, especially for naps. When we’re at home, he almost always goes down for a nap around 12:00/1:00 and will sleep for at least a couple of hours. Now that we’re in a routine of getting ready for bed and watching TV to relax around 10:00/10:30, he does better with the bedtime crib transition most of the time. If he still won’t go down on his own after a couple of episodes, generally he will after one of us sits with him in his room for a few minutes (rocking together in the rocking chair or one of us sitting in the rocking chair while he’s in his crib). 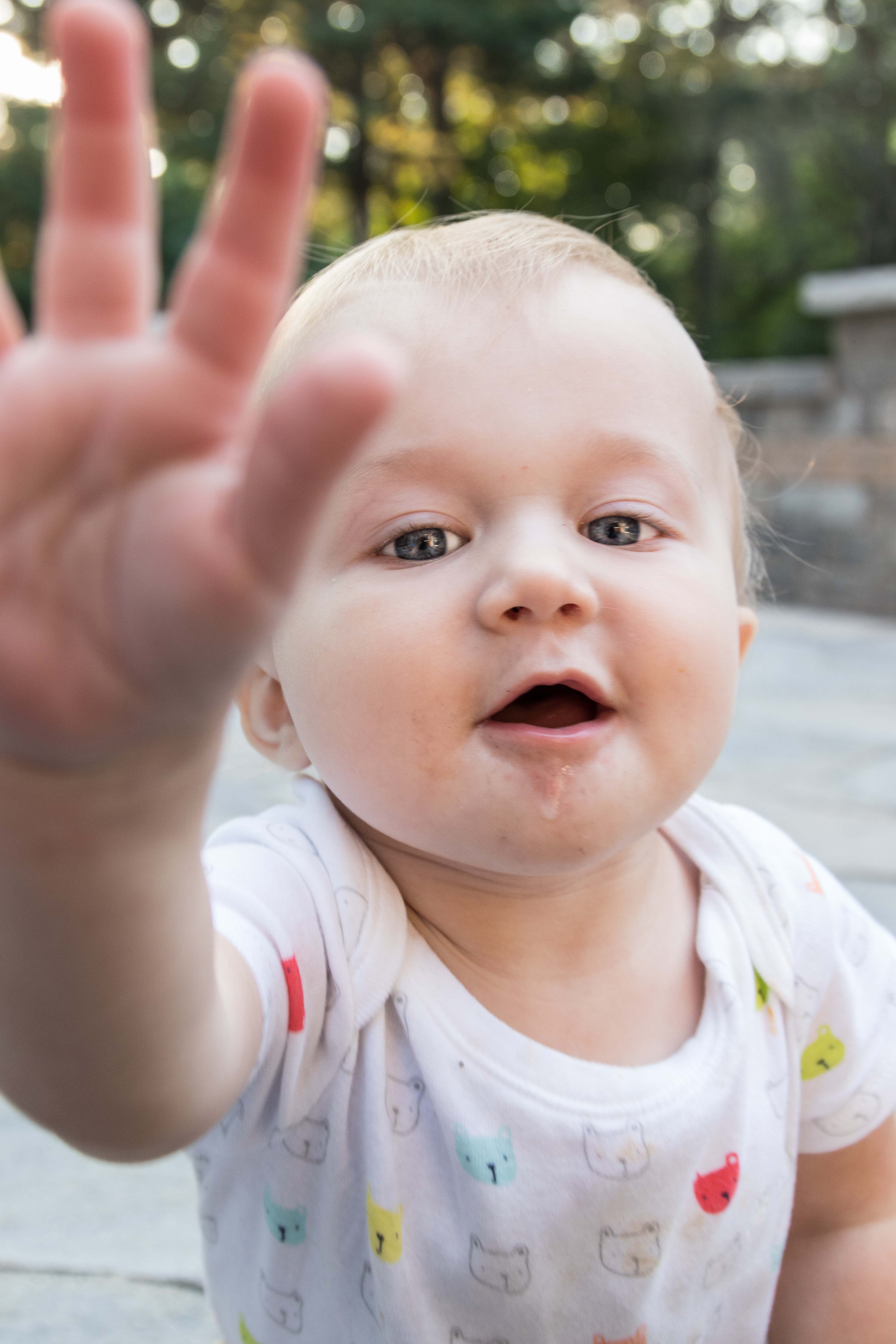 (I promise that this is not a “don’t take my picture” shot. It’s a “let me touch the camera” shot.)

As many of you already know, this past month was really busy, with Tommy’s birthday the same week that my mom’s mom/Tommy’s great-grandma passed away and Tommy’s first cousin was born. The week of Tommy’s birthday, we had our brief getaway to the Dells and Tommy’s birthday party. We had a casual open house at our place for about 30 family and friends. People were able to come and go as their schedules allowed. We got to talk to everyone and Tommy didn’t get overwhelmed. It was a lot of fun. Thank you so much to everyone who has helped make Tommy’s first birthday so special.

Then the following weekend, we had Tommy’s great-grandma’s funeral on Friday. Tommy got to spend a lot of time with extended family and meet a number of family friends. Tommy’s great-grandpa traveled up from Texas for the weekend. Tommy and I went back to down to Chicago to spend more time with him and other family and family friends on Sunday. Among other events, we were able to attend one of Aunt Bethany’s (outdoor) Grant Park Chorus concerts. 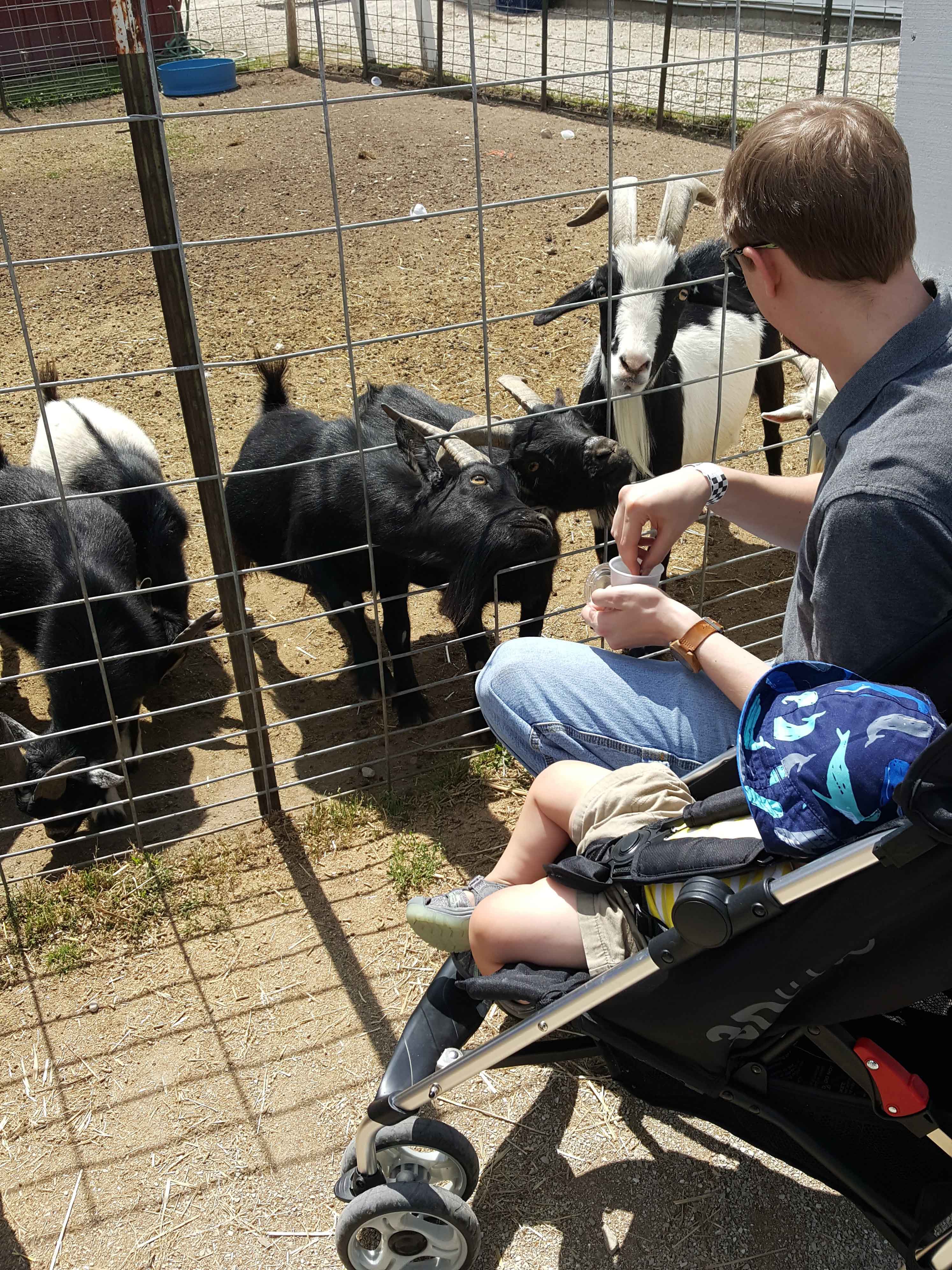 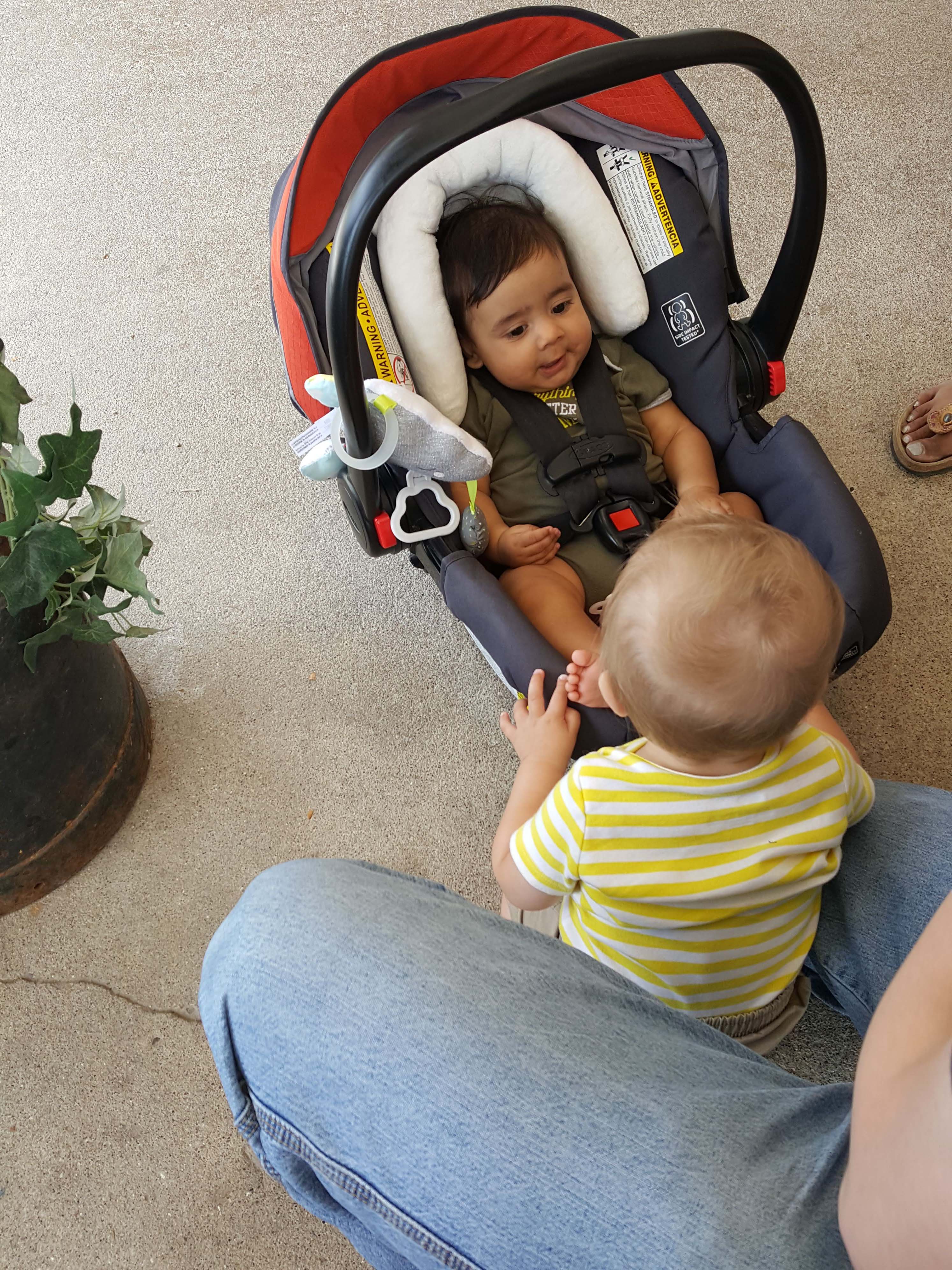 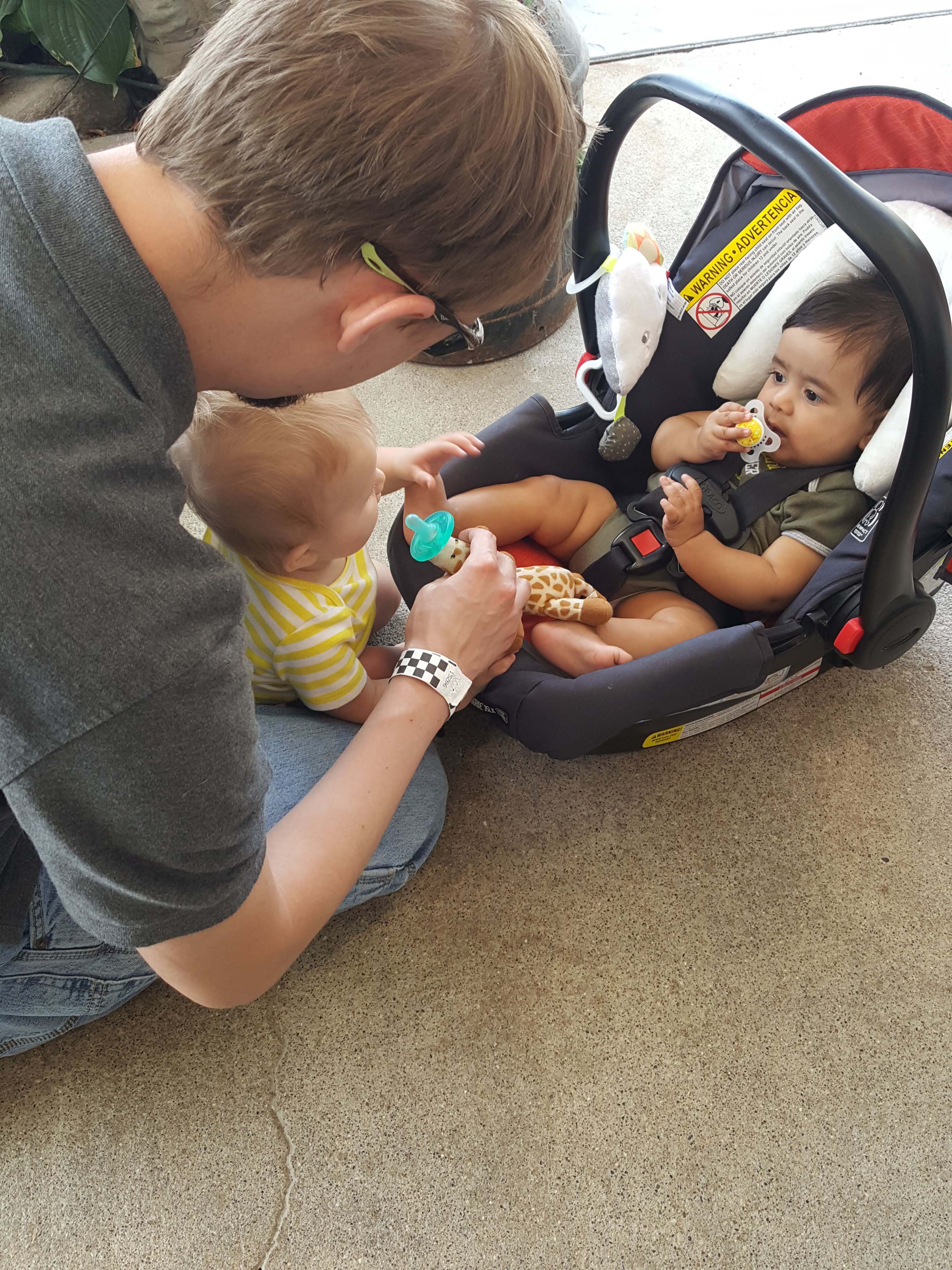 A few weeks ago, Tommy’s godparents and their boys made a brief stop through our area on the way back from a wedding in Chicago. Tommy’s godparents hadn’t seen Tommy since his baptism in September. We hadn’t met their younger son who was born in February. We met up with them and Joe’s mom at Apple Holler for lunch and a little time with the animals. (Of course, we had to pick up donuts while we were there, too.) 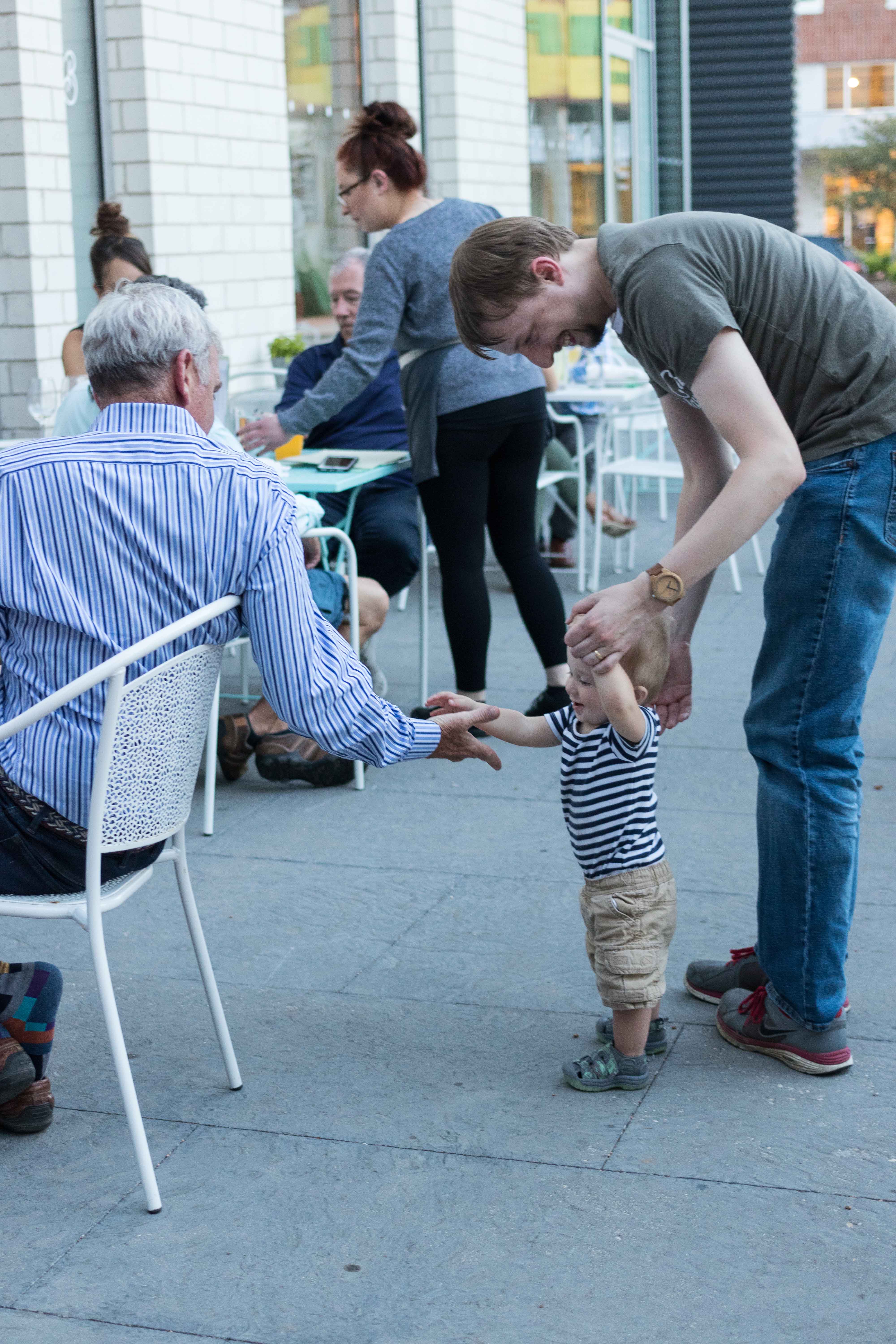 This past week, we went up to Milwaukee to see Layers&Layers at Denim Park. As always, Tommy was super social, and he got us to talk to a bunch of new people while we were there. He also had fun meeting some new dogs. 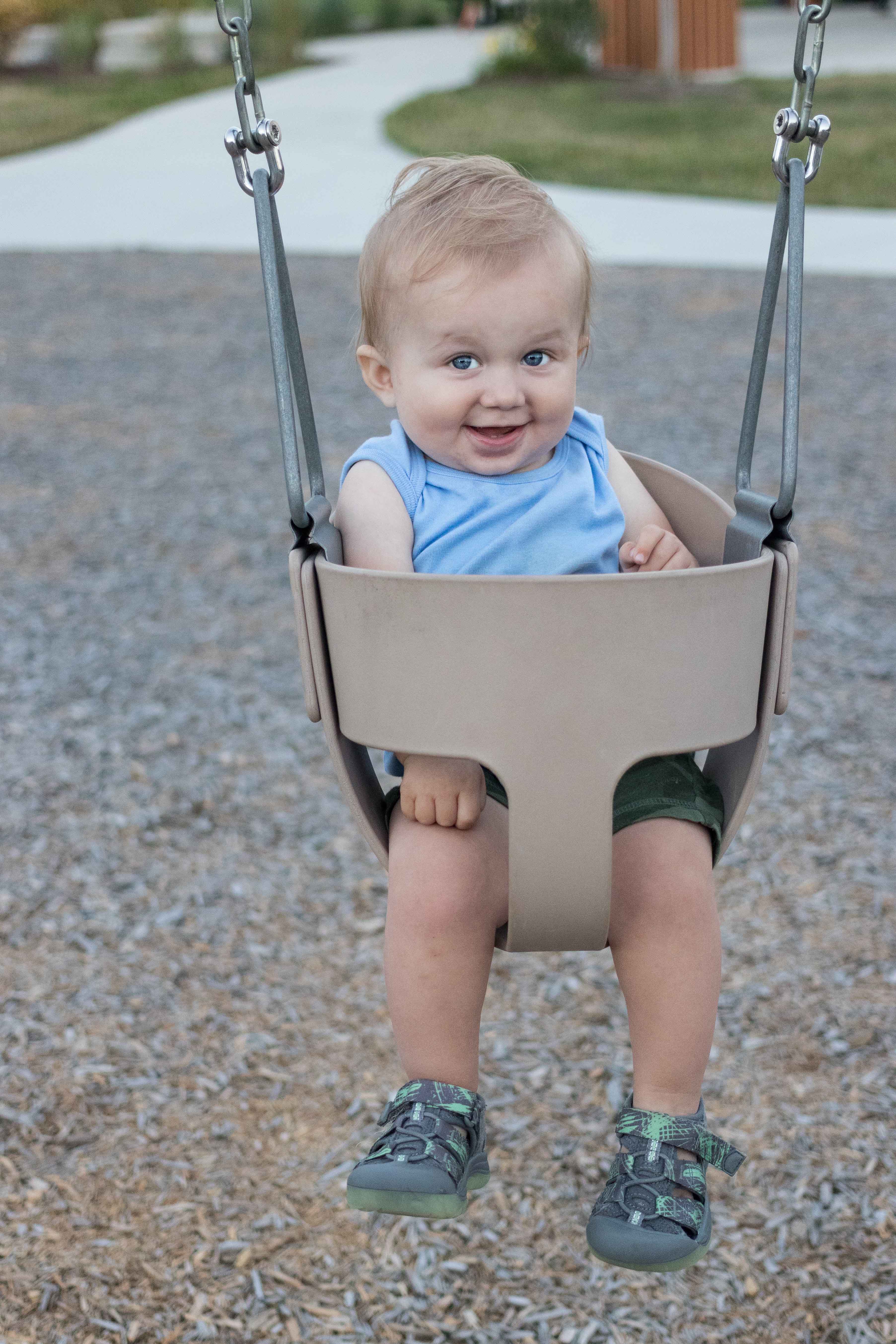 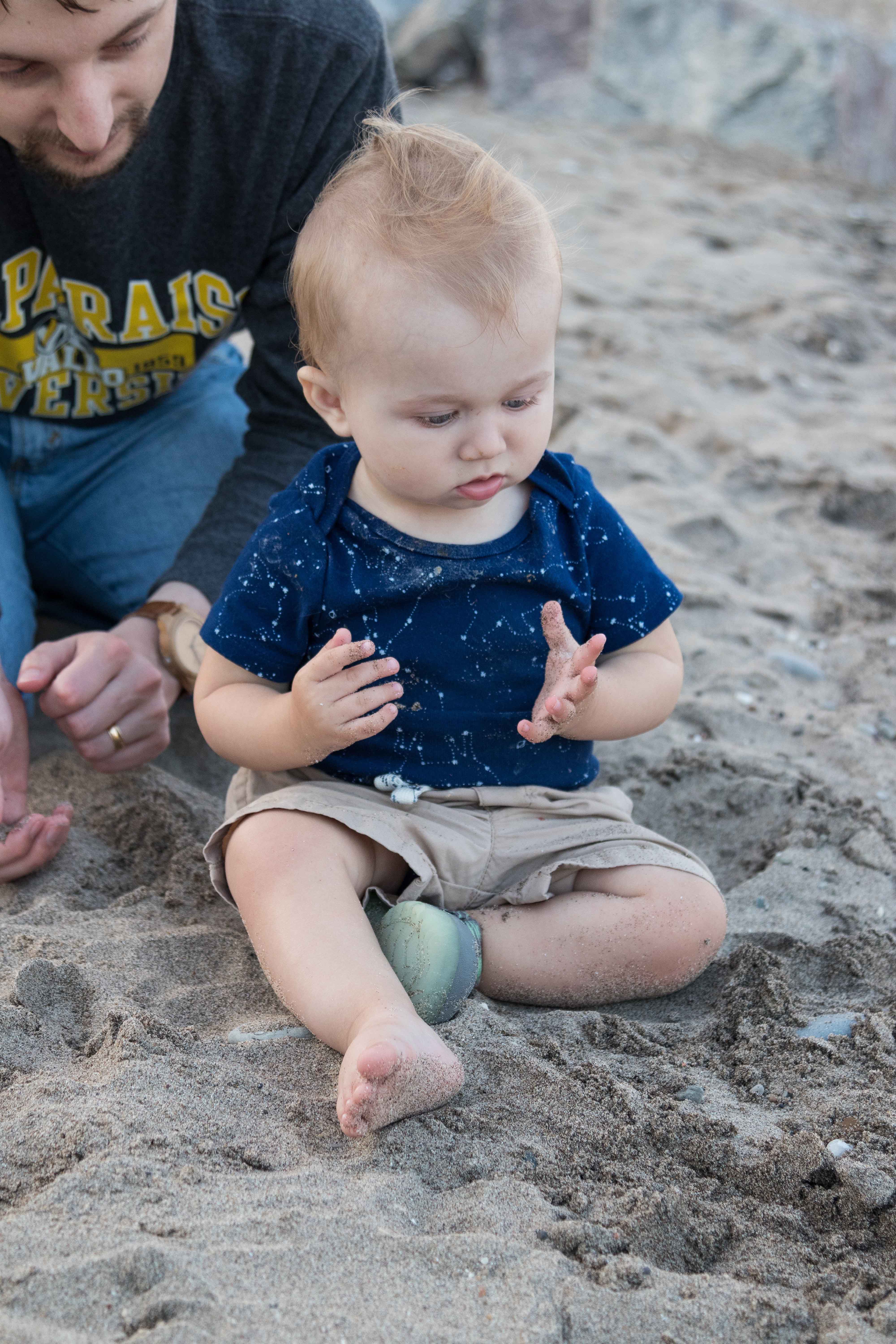 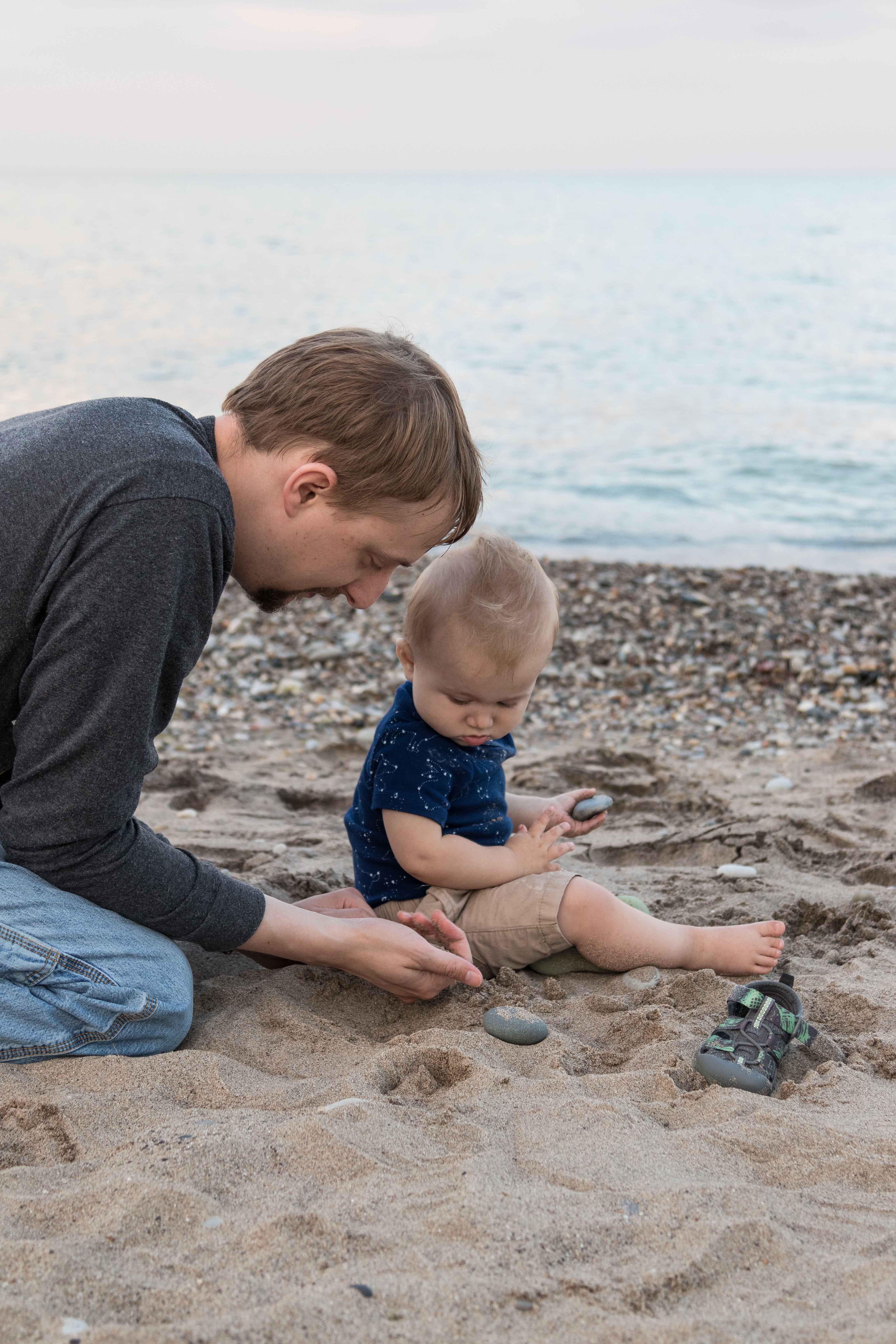 Otherwise, we’ve been spending a lot of time outside, enjoying walks in the neighborhood, swinging at the park a few blocks away from our house, sitting on the beach, and hanging out on our back patio. Most mornings, if weather allows, Tommy and I get over to the playground for swinging and a few laps in the stroller around the village green. Then we fit in another slightly shorter walk with Jake in the evening either before or after dinner.