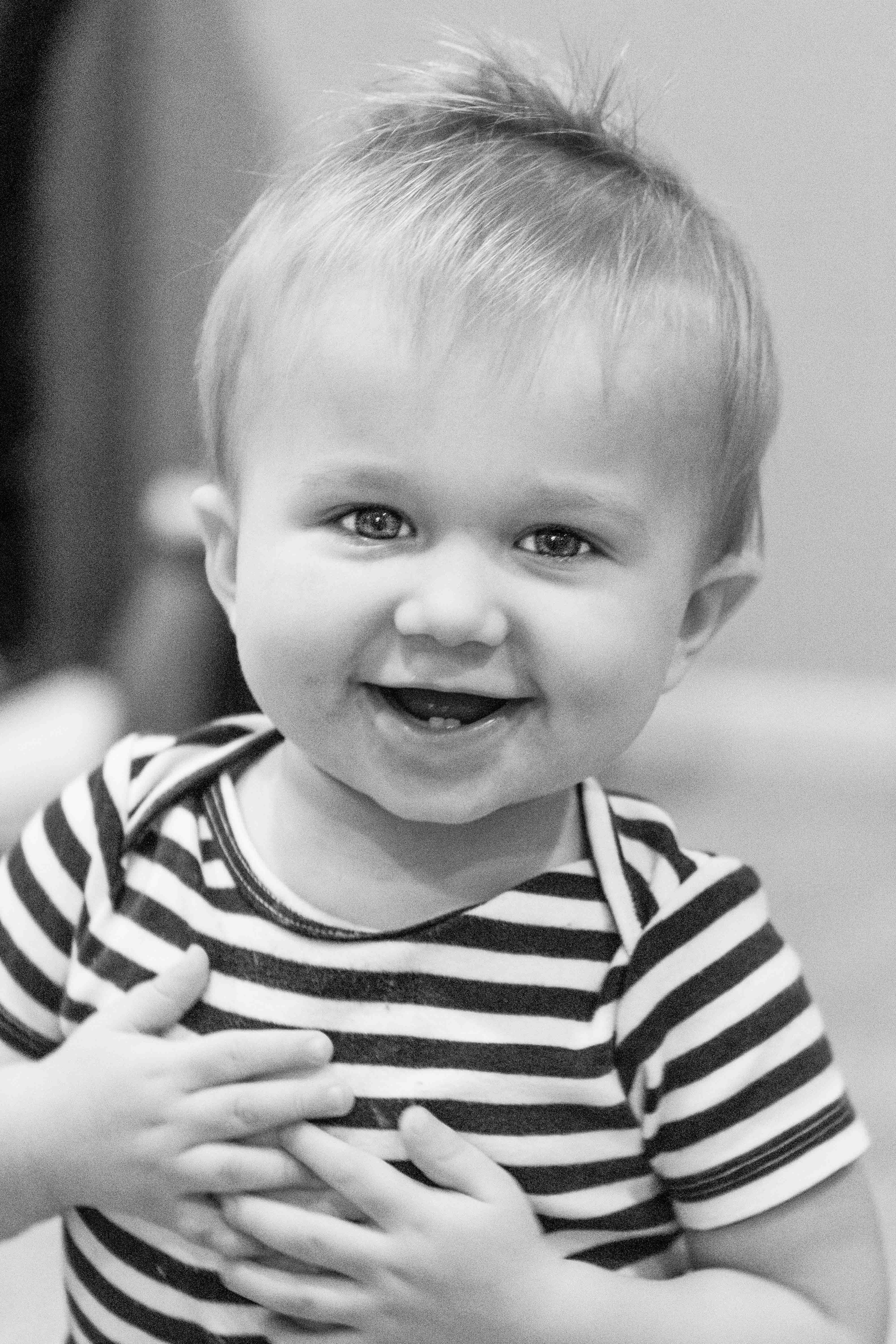 This past week our Tommy turned 16 months old.

Due to the timing of renewing our adoption home study for another year, we fit in a 15-month doctor’s appointment for Tommy right in between 15 and 16 months. At this appointment, he weighed 21 pounds 3 ounces and measured 30 inches tall. These numbers put him at the 24th percentile for weight and 9th percentile for height. His head circumference was 18.5 inches. 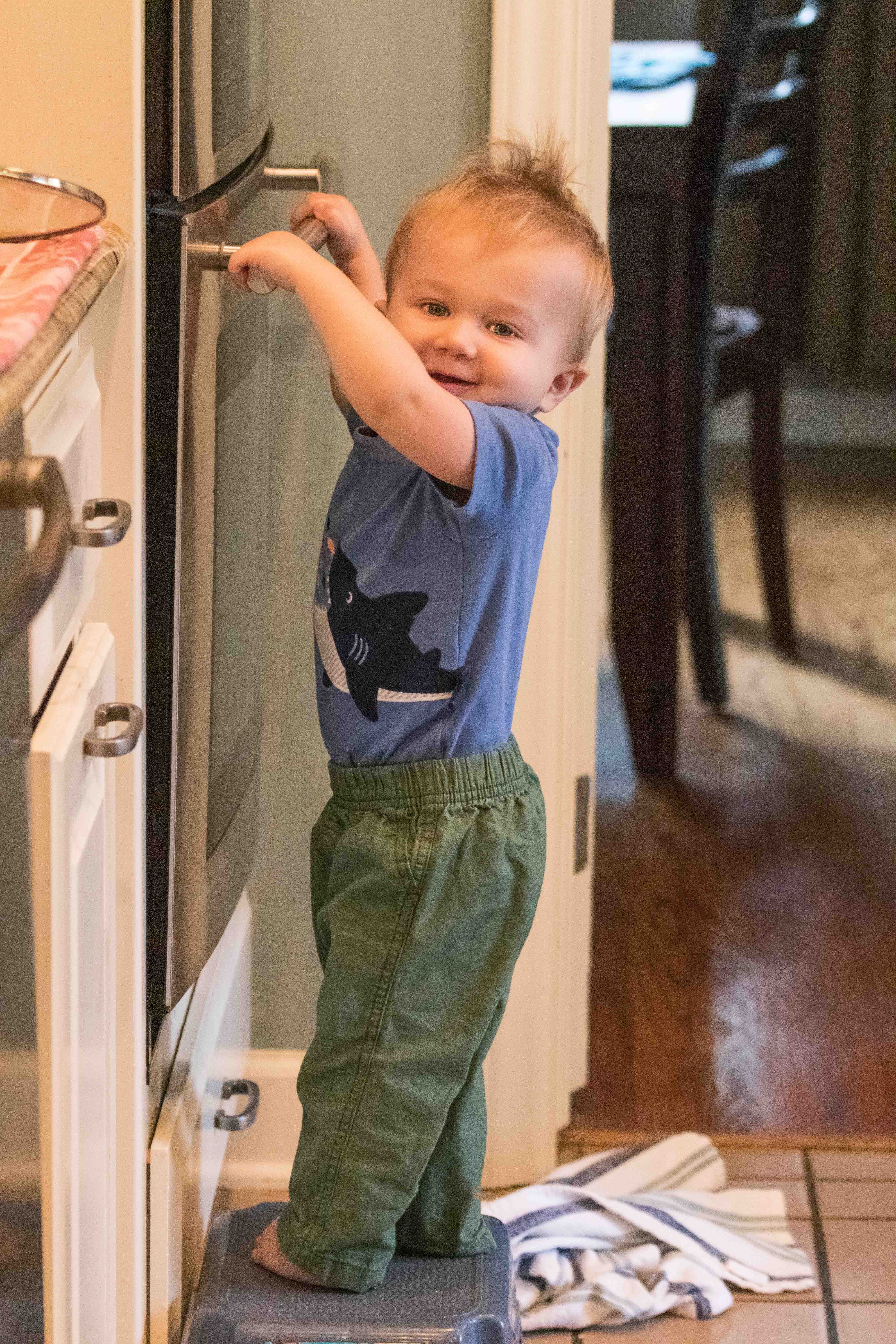 Tommy is starting to engage in imaginary play, namely pretending to talk on the phone, take sips of water/juice/milk out of empty cups, and talk to and hug his stuffed animals. He’s been imitating sounds that we make for months. More recently, he’s started imitating words, and even phrases. Sometimes he just makes the initial sound of a word. Other times he’s able to repeat several syllables or words clearly (clearly enough that you can tell he’s trying to imitate you anyway).

Tommy is still signing “more” and “all done” all the time. This past month, we’ve been working on “please,” “up,” and “down,” as well. Tommy signs “up” and “down” independently all the time and “please” without prompting 80-90% of the time. When you prompt him with “what do you say?” or “how do you ask?,” he’ll almost always make the “please” sign. He does high five consistently with everyone, even people he doesn’t know very well. 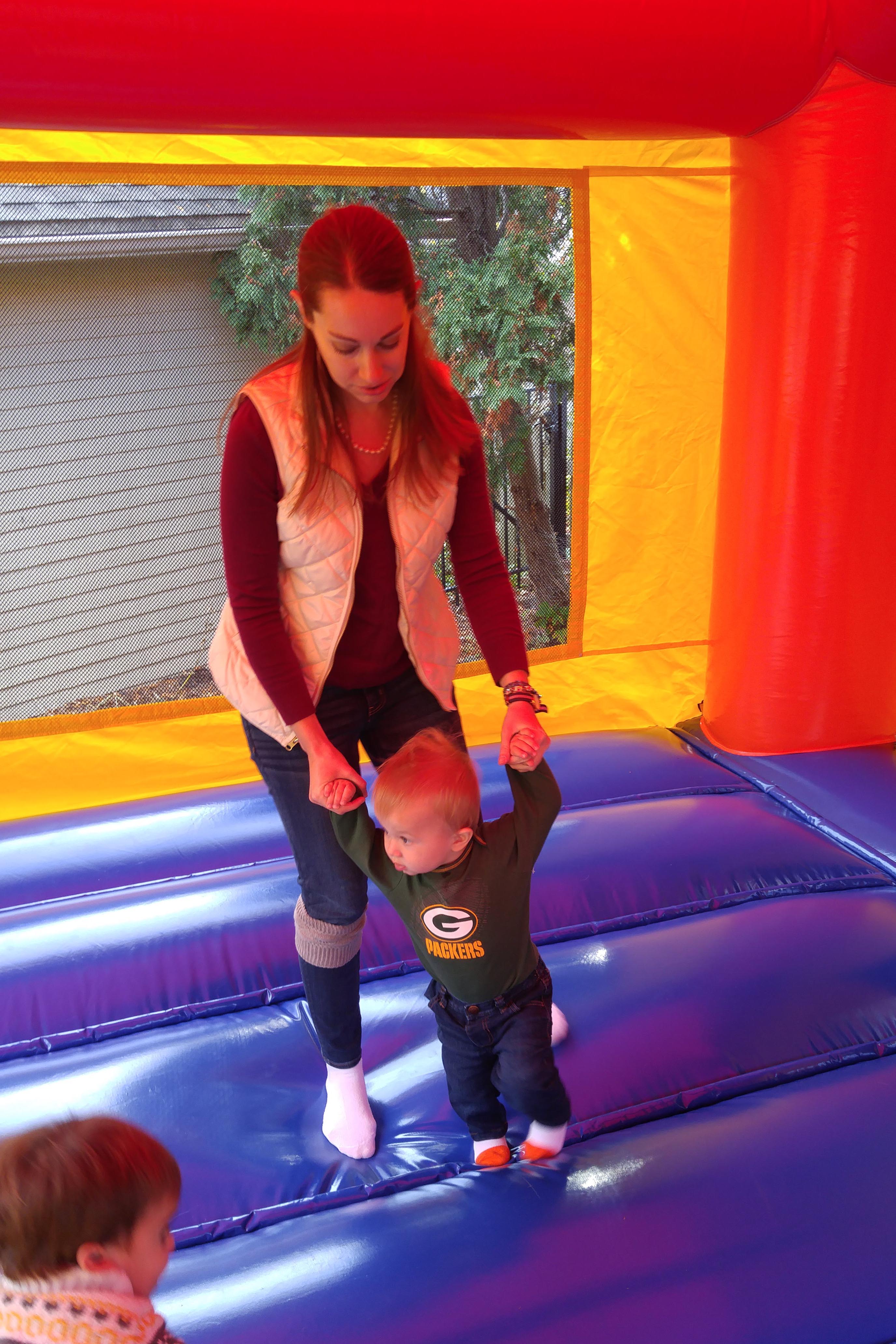 Currently, Tommy is crazy about anything with buttons – remotes, elevators, kitchen appliances, etc. He’s learned how to control the bedroom fans via remote, which never gets old. He also loves operating light switches. Other fun/funny activities lately include stomping his feet, going up and down stairs (he’s starting to master the shallow living room stairs), pulling objects around the house (i.e. his winter sled, popper toy, wagon, etc.), getting dizzy, falling down on purpose, finding people’s belly buttons (which is super fun with strangers), talking to Alexa (he will lead us to the Echo in the living room and talk to it when he wants to listen to music), chasing the cats, and playing in the sink. 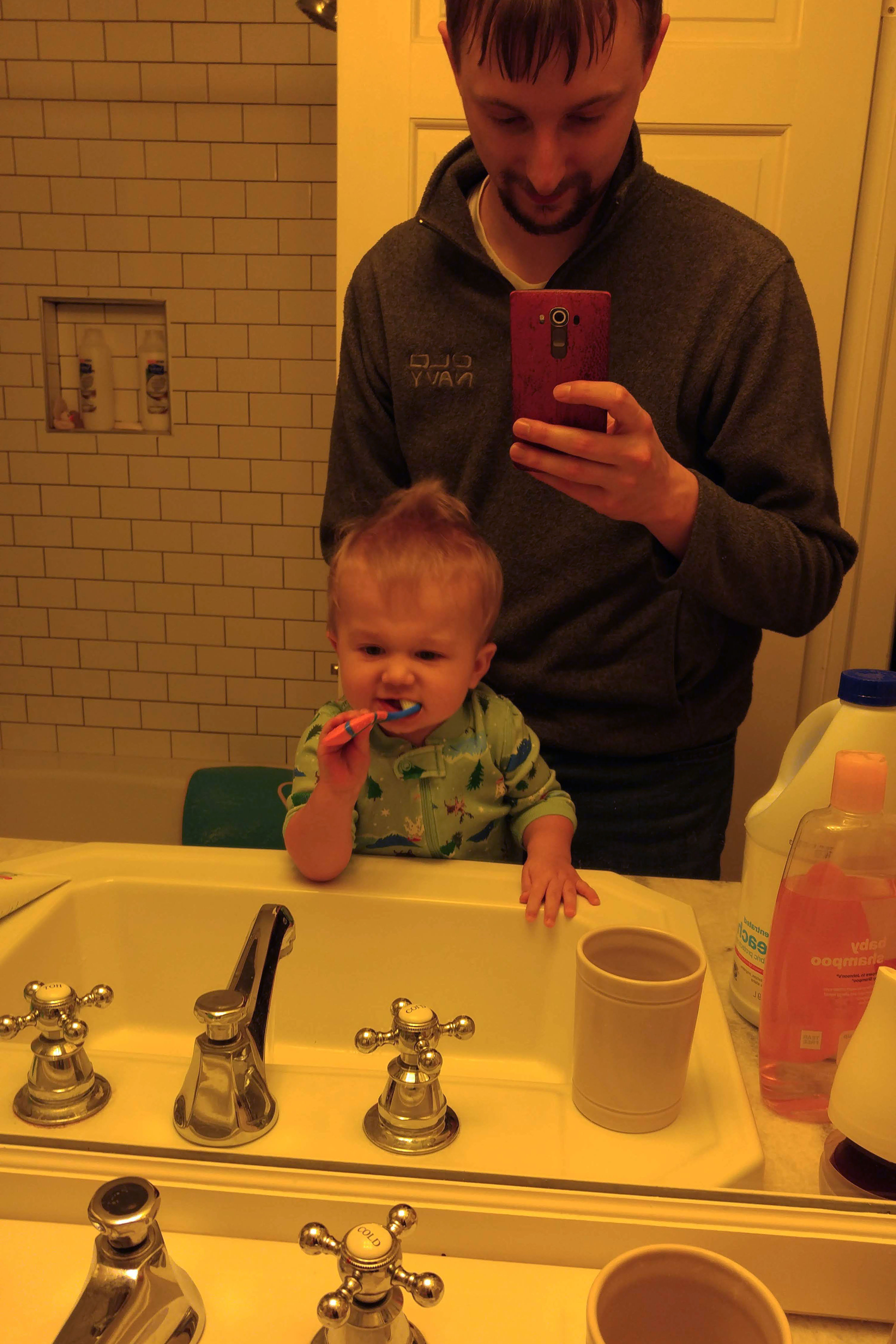 Tommy cut tooth #7 this month, another top tooth. We’ve started brushing his teeth twice a day. He has done great with teeth brushing right from the start and actually enjoys it. I’m going to take him to the dentist for the first time in early December, so I’ll report back on that experience in the next update. 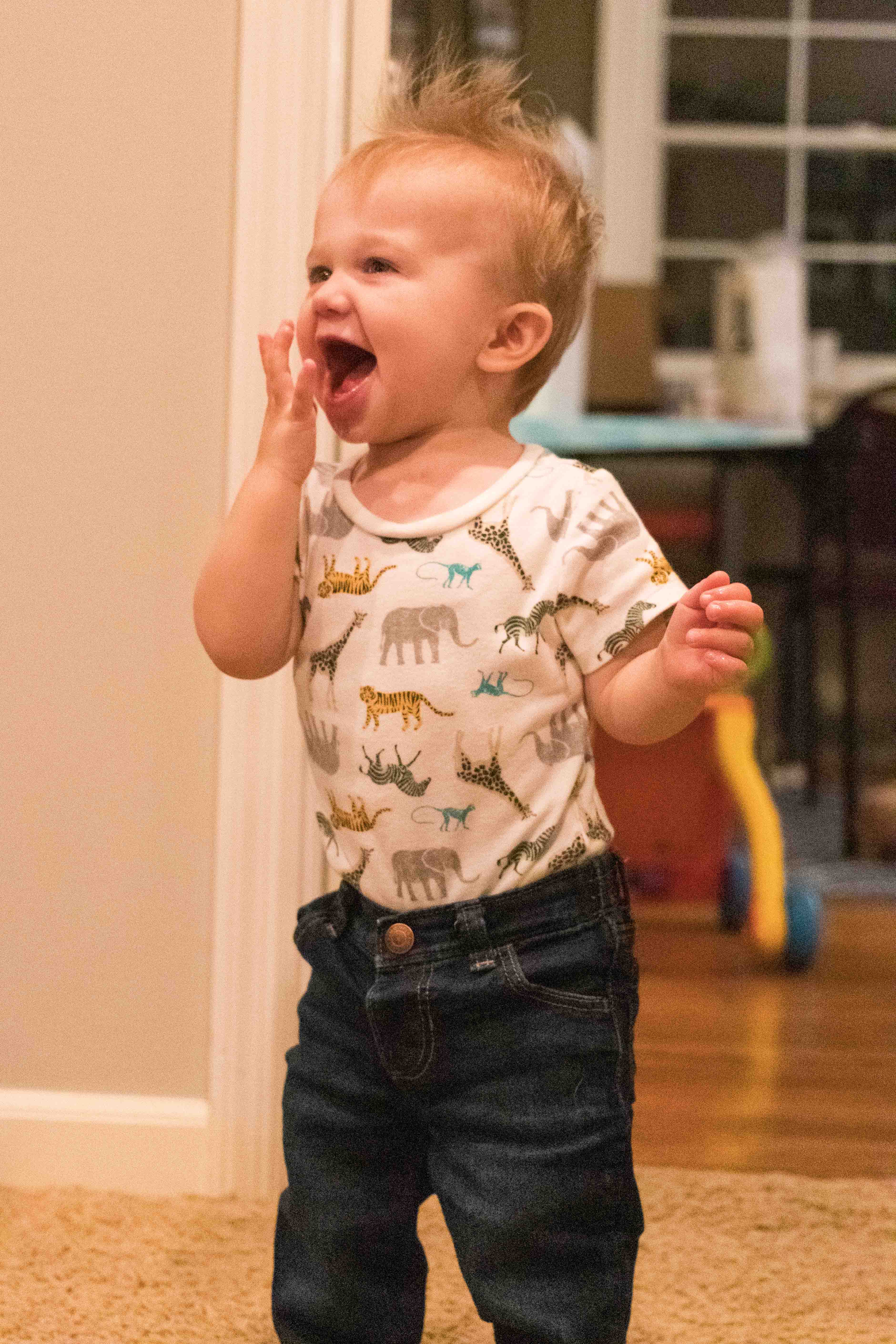 We’ve slowly been transitioning Tommy off bottles to using sippy cups and regular cups exclusively. He hasn’t made this transition fully yet. Around the time toddlers are comfortable using bottles independently, it’s time to stop using them. It makes for a bit of a tough transition. It’s also a huge transition to drink liquid while eating, at least part of the time, instead of consuming most of your calories through large bottles.

Tommy’s doing great drinking water and juice out of sippy cups and will drink milk out of a sippy cup about once a day. He still takes a couple of milk bottles. While we were in D.C., Tommy started drinking with a straw. After getting back, I bought him a couple of sippy cups with straws, which he absolutely loves. He does pretty well drinking out of regular glasses, both with and without straws. It’s just still pretty messy, so it’s more practical to have him drink out of sippy cups for a large portion of the day. 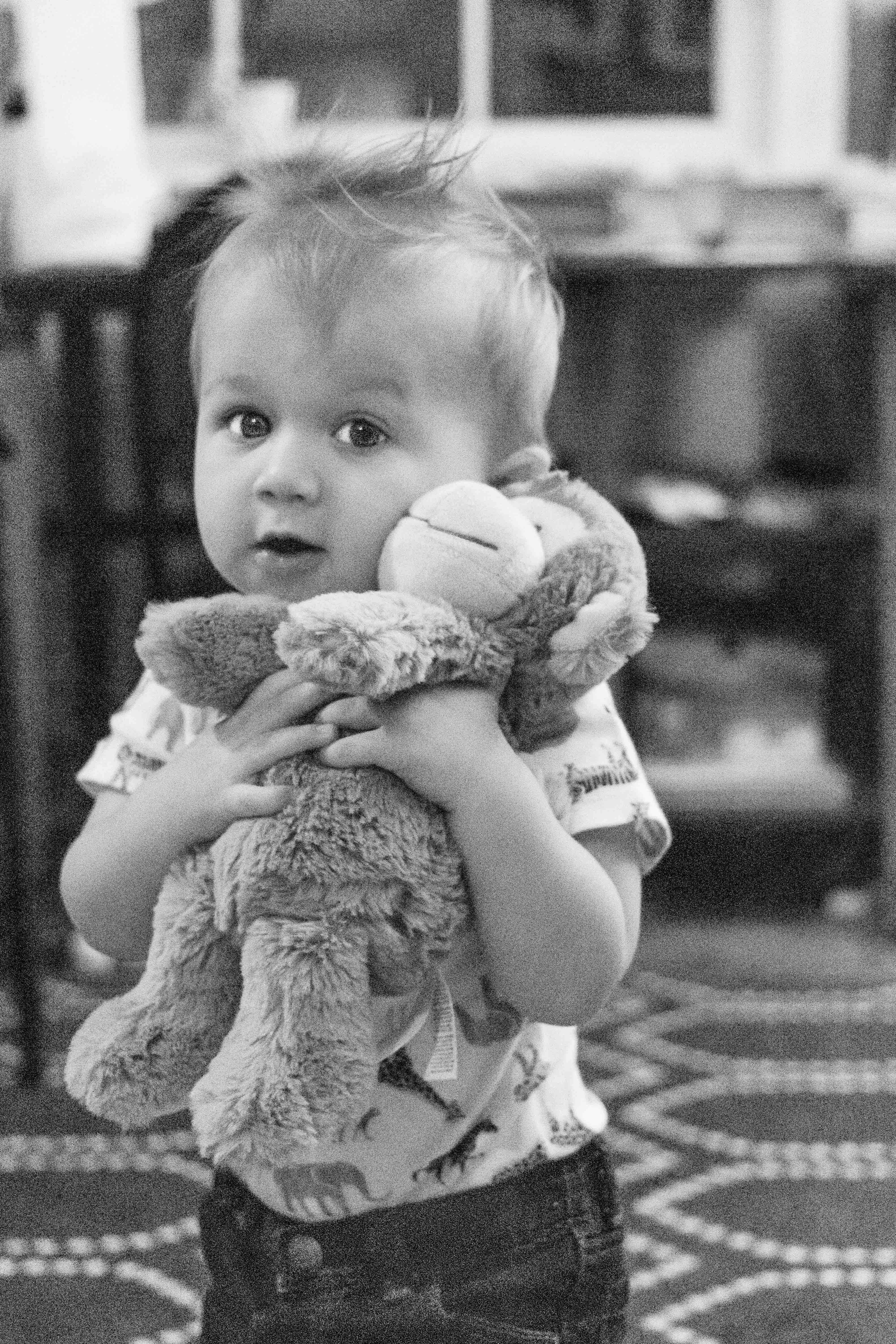 Tommy eats three meals now and usually at least one snack and one-two 5-6 oz milk bottles. Most mornings for breakfast he eats blueberries or grapes with buttered toast or a frozen waffle (we like the Earth’s Best blueberry organic frozen mini waffles). I eat scrambled eggs for breakfast most mornings these days. Tommy didn’t like them until very recently but does now, so I’ll often make an extra egg (because he just wants to eat all of mine, so you know). He really loves summer sausage. Most days for lunches, he’ll eat summer sausage with some cheese, fruit, and crackers. Then he’ll eat whatever we’re eating for dinner. Tommy isn’t a picker eater thus far and hasn’t flat out refused to at least try any dinner food. He continues to enjoy the Gerber baby snacks, so we rotate through a variety of them for snacks and meal supplements. 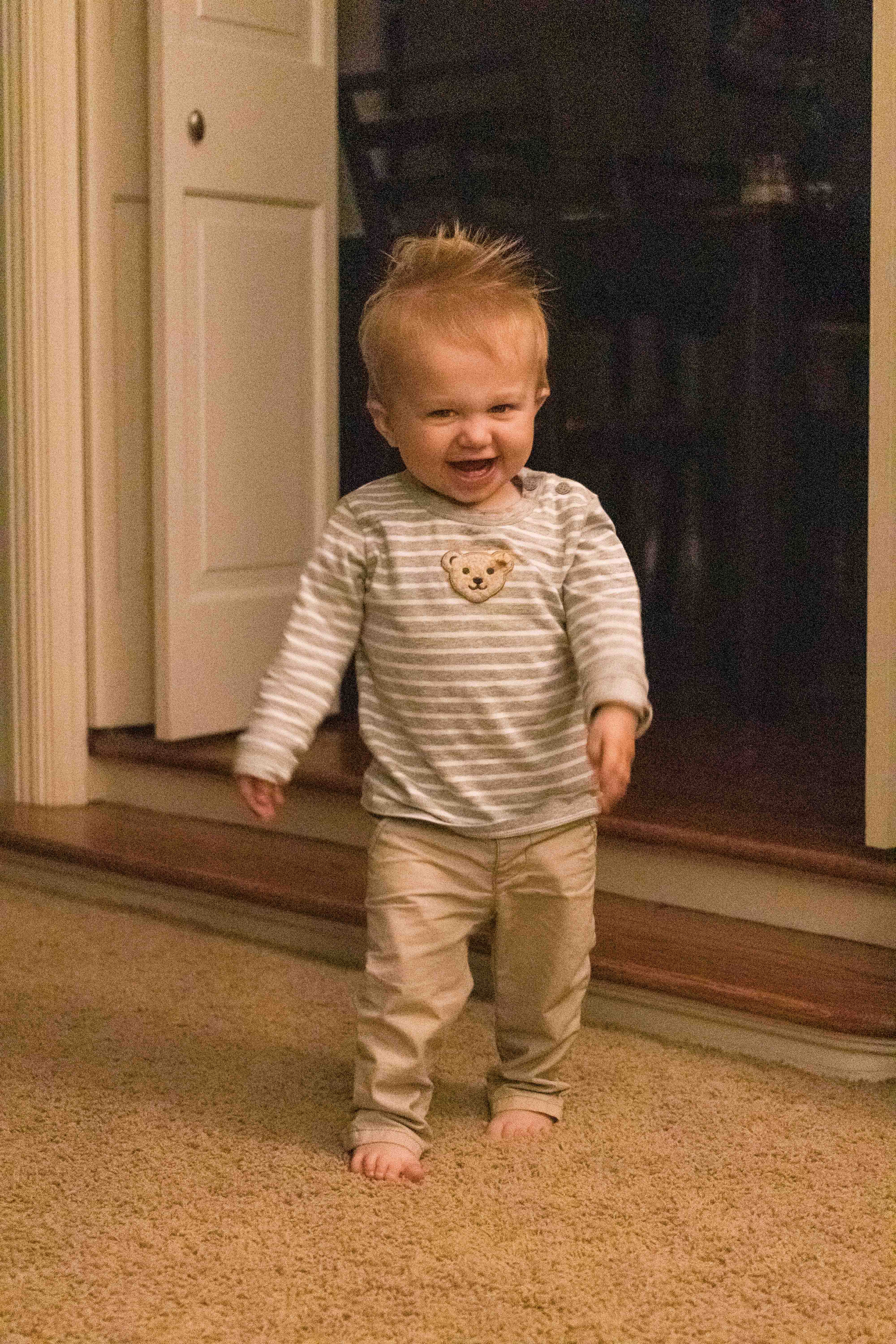 Tommy takes either one long early afternoon nap or two shorter naps, one in the early afternoon and one in the later afternoon. It just varies from day to day. We’ve been working on getting him to sleep a little earlier, around 9:00/9:30 p.m. He has a consistent bedtime routine and rarely puts up much fuss once he’s in his crib. He still wakes up during the night maybe a quarter of the time, just needing just Wubbanub again, and wakes up for good around 8:00/8:30 a.m. most mornings. 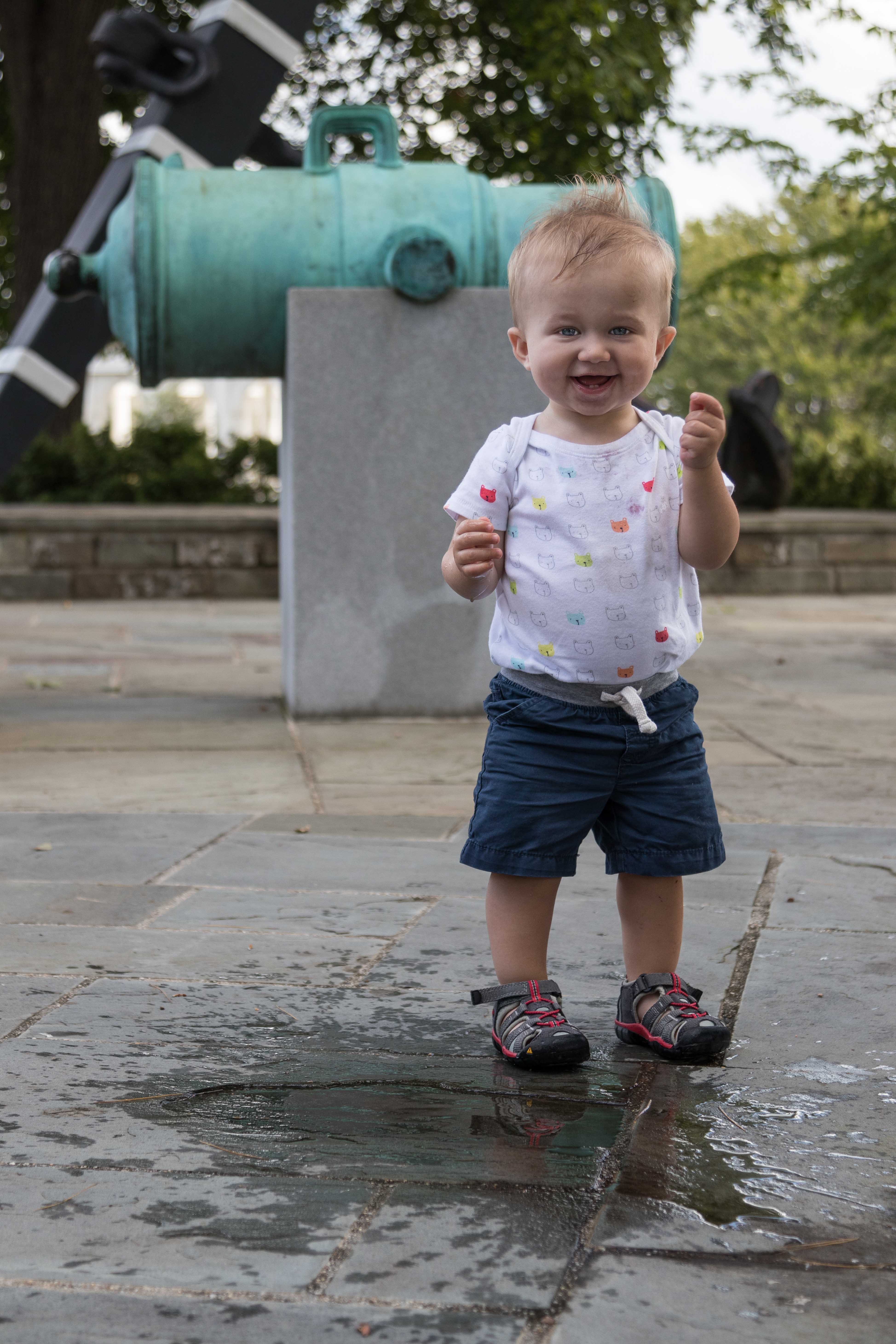 We kicked off month 15 in Washington D.C. Tommy and I tagged along with Jake for a few days for a conference in National Harbor, Maryland. You can read more about our trip here. 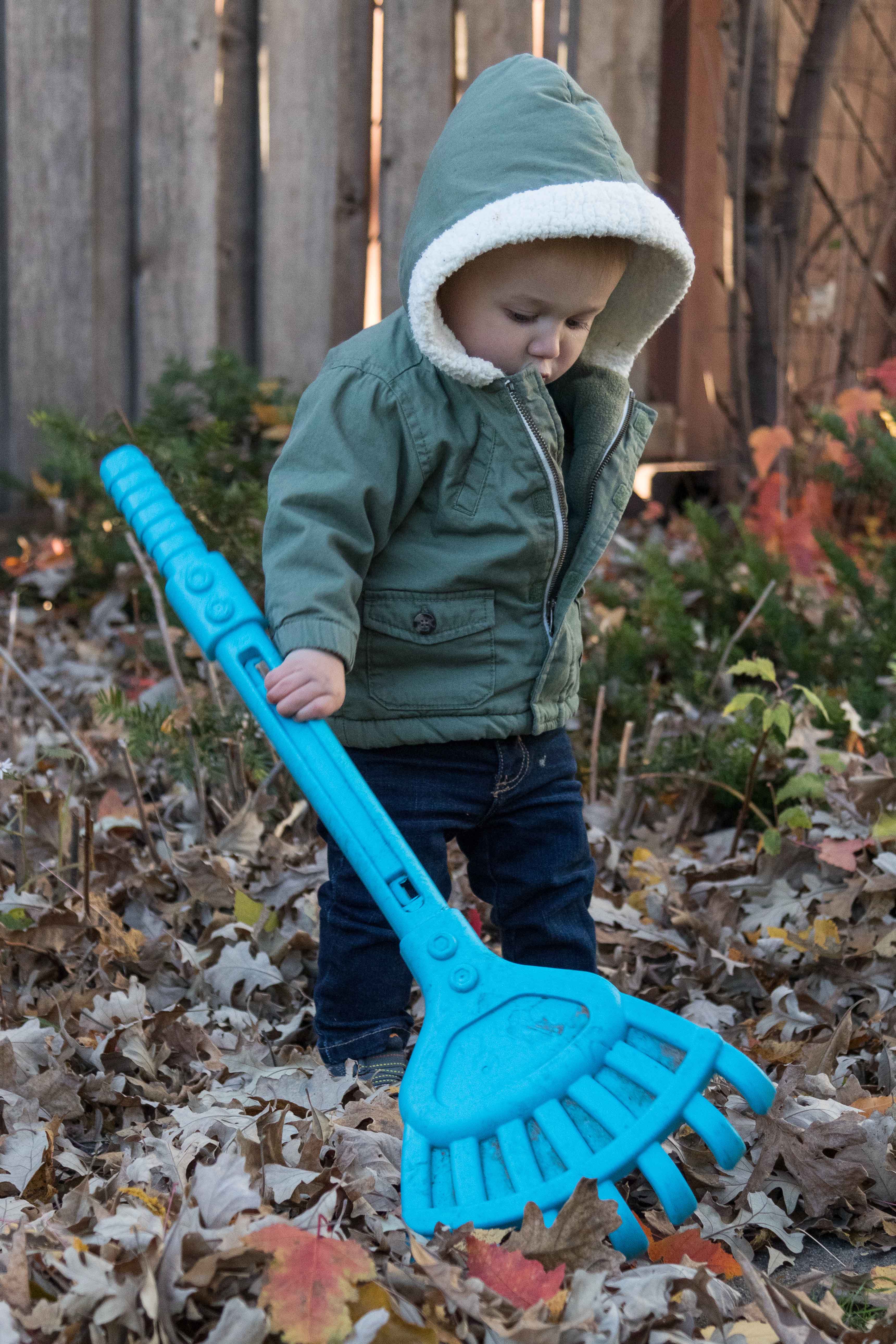 This past month, we had one more trip: a long weekend in Minneapolis for Tommy’s godparents’ second child’s baptism. One of the highlights of the trip for Tommy was raking leaves in our friends’ backyard. Joe raked leaves, so the boys could jump in the leaf piles. Instead, they wanted to rake leaves, too. 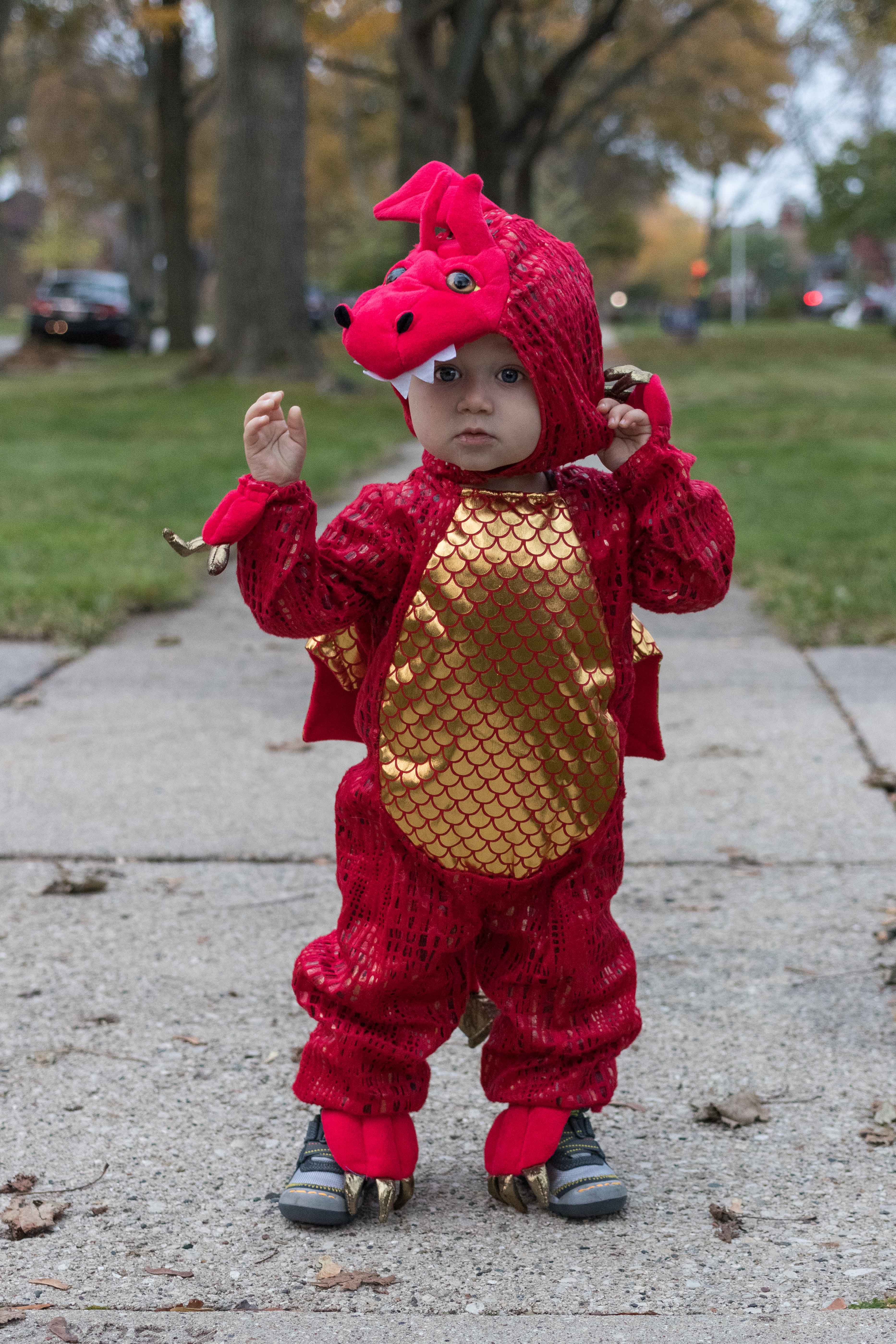 We had a few Halloween celebrations this year. Tommy went as a dragon. Jake was a knight, and I wore a Medieval dress. (It’s available here, and it’s amazing.) The Saturday before Halloween, we attended our neighborhood kid Halloween party, then headed up to Milwaukee to trick or treat with some friends in their neighborhood. On Sunday, we had trick or treating in our own neighborhood. Tommy had a lot of fun at the Halloween festivities. By the end of the Sunday trick or treating stint, he definitely understood the concept of getting candy.