Many of you know that for the past couple months, my husband Jake and I have been going through the home study process for domestic infant option. We’ve been pretty open about it with family and friends as well as anyone else who happens to inquire about our current children status or lack thereof. (And no, “we’re currently pursuing adoption and hope to have our home study completed by the end of the year” is never the answer anyone expects so that is sort of fun.)

We’ve been pretty open about it because it’s a huge part of our lives and because we need all the support and prayers we can get. I haven’t discussed it on social media at all (aside from a few posts in closed groups) because I don’t want a flood of generic “congrats” messages and unsolicited opinions, and I don’t want to encourage people to tell me more adoption stories. I know it sounds awful, but when you tell people you’re pursuing adoption, they promptly say, “Oh, that’s so exciting, my cousin / friend’s neighbor / sister’s husband’s aunt adopted a kid.” I know people mean well, but I can only handle so many of these stories.

On the deeper side, I haven’t written about it until now because my emotions are all over the place. It felt so good to close the door on 2015 and my failed IUI treatments and leave the world of fertility treatments behind. It’s been a refreshing change of pace to join an adoption community and meet other people right in southeast WI who have chosen the same path. But we also spent the majority of 2016 just sitting on a waiting list to start the home study process. We had no idea how long we would be waiting. Aside from looking into other agencies (and ultimately deciding we were still best off going with the agency we’d already chosen), there was literally nothing else we could do. We spent large portions of our trying-to-conceive years doing nothing, and it felt terrible to be back in that place.

We were #4 on the waiting list and hadn’t seen any movement on the list all year so it was a complete surprise when we did find out we’d be able to start the home study process. We were in Montana when I got the email, and it was nice to celebrate with friends. We got the ball rolling pretty quickly when we got back and have been “in progress” ever since. I hesitate to share too much about the specifics (i.e. paperwork, safety requirements for the home) because it varies from one state to the next and for different types of adoption (i.e. domestic vs. international). Needless to say, there’s a lot.

The emotional component comes into play because we’re spending a lot of time and money on the home study, and there’s no guarantee we’ll be able to adopt a baby. Even if we do adopt, it could still be years before we’re matched with birth parents. A lot of days, it feels good to be doing something, even when it’s expensive, time-consuming, tedious, and/or emotionally difficult. Some days it feels overwhelming and downright ridiculous.

My single lowest moment during the home study process thus far came during the day I found out that both Jake and I failed fingerprinting (they couldn’t read the prints). Jake was in the midst of a very stressful week at work, and I knew the last thing he’d want to find out is that he’d have to take more time off to get re-fingerprinted. I’d already spent hours that day researching baby gear and was feeling ridiculous about my lack of knowledge and for spending so much time researching gear not knowing if we’ll ever be able to adopt a baby. It was just one of those “WTF am I doing all this for?” moments. Thankfully, I have people who get it and never judge me for sending long, rambling texts out of the blue. You know who you are. Thank you. Taking a break from work and home responsibilities for a couple hours and watching some Seinfeld episodes helps, too.

Amidst paperwork, doctors’ appointments, fingerprinting, training sessions, home visits, and trips to Home Depot for safety gear, we’ve been putting together a few things for the kid’s room. Including photos of a furnished or at least partially furnished baby’s room in a profile book is often beneficial, so we decided to go for it. Yes, it’s really difficult, and I completely understand why people don’t do it. But it’s also really difficult having a room sit empty. We’ve been doing that for a year just in this house and several years before that in our previous residence. So the progress feels good while also surreal, difficult, and at least half a dozen other emotions. I had already been working on a few projects in the room, including painting, cleaning the built-in shelves, and washing and re-hanging the curtains (which came with the house). Since then, we’ve purchased some furniture and are working on a few other decor items. 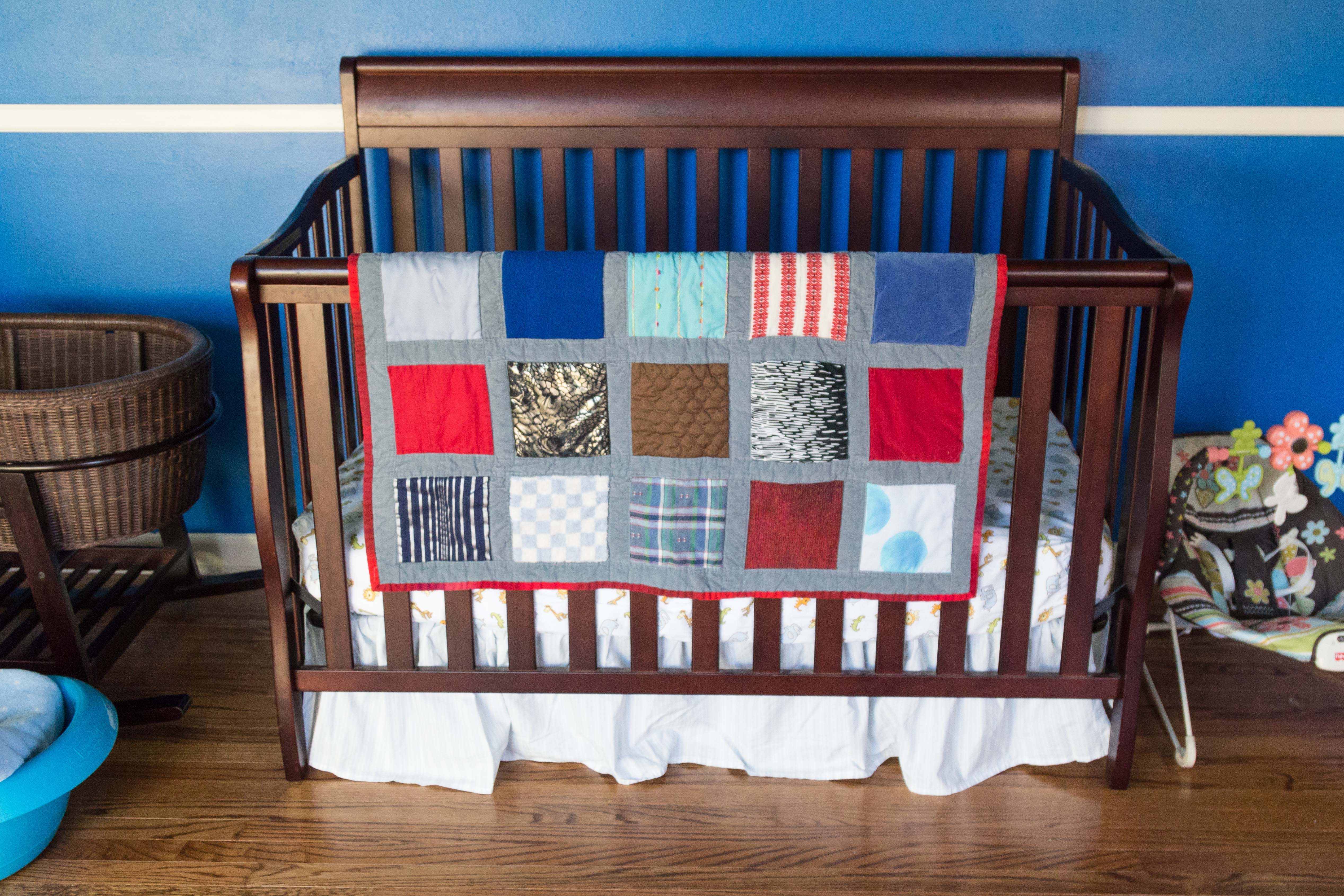 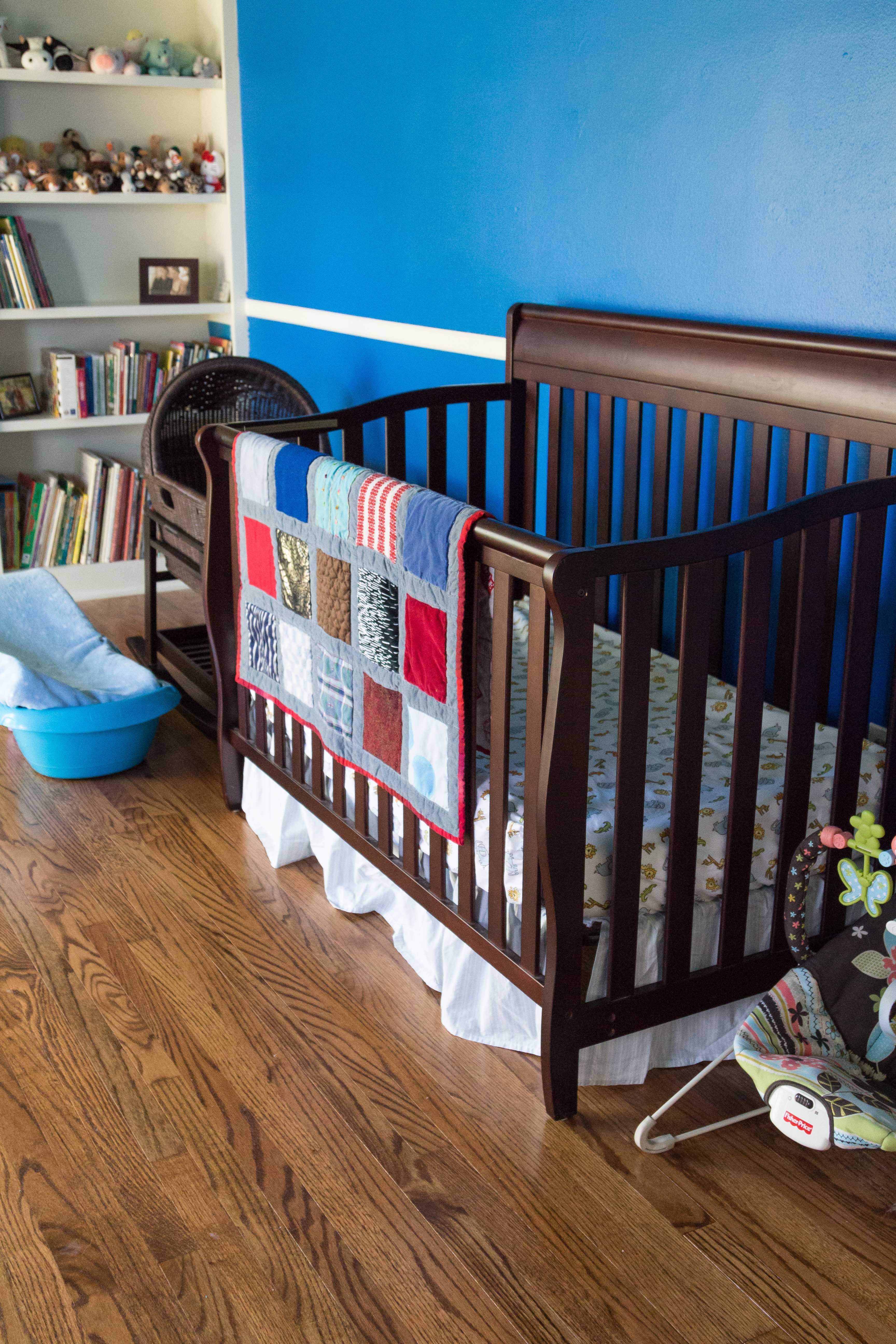 Thanks to the generosity of a friend and a few neighbors and a Facebook buy/sell group find, we’ve spent less than $300 and have a crib with a mattress, a bassinet with a mattress, most of the bedding for both the crib and bassinet, a dresser, a baby bouncy seat, a baby bath, and a baby changing table pad with a cover. A neighbor also gifted the large giraffe. I have no problem spending on baby items, especially items that will need to be purchased new, like car seats. But I’m hesitant to buy too much more at this point because: 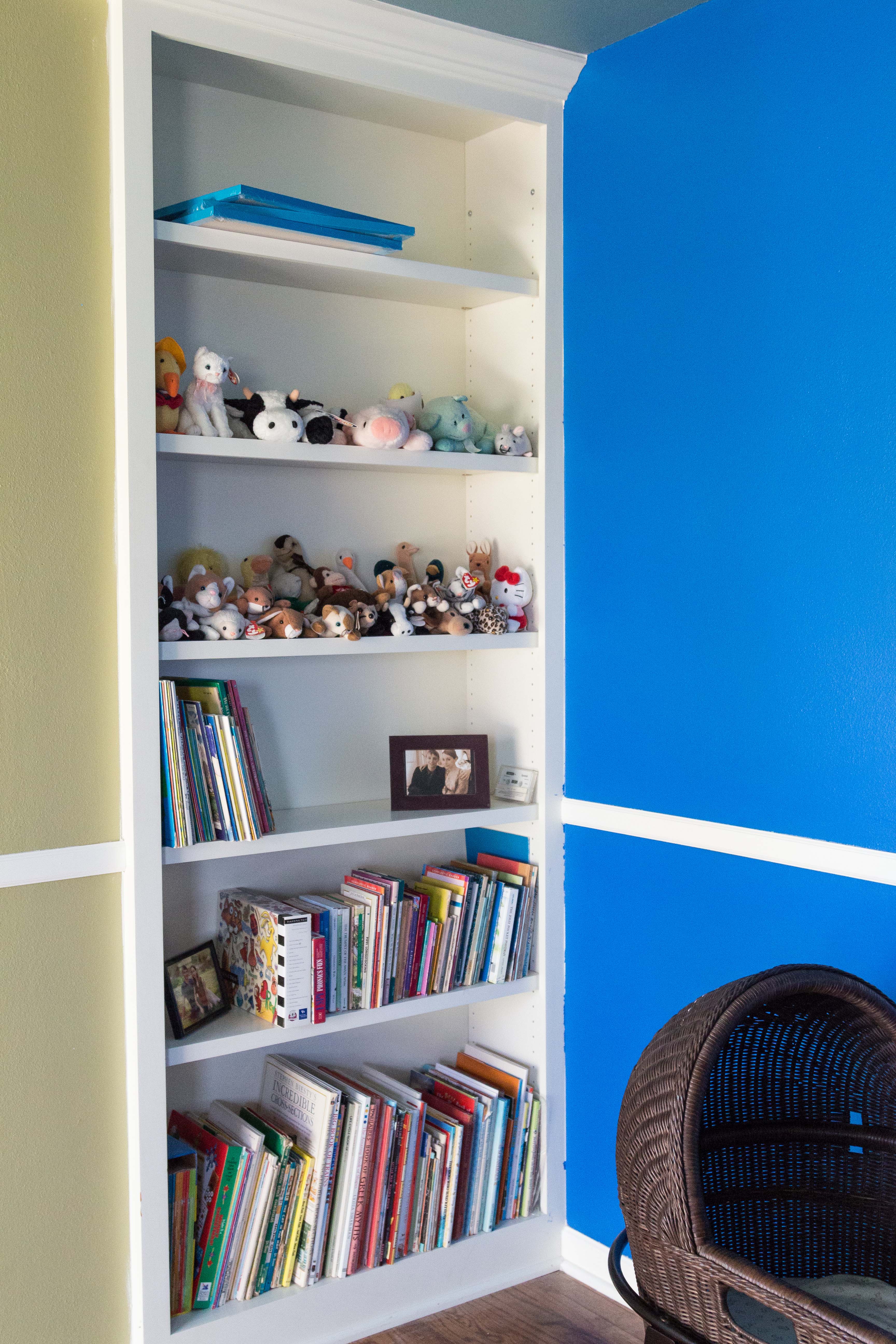 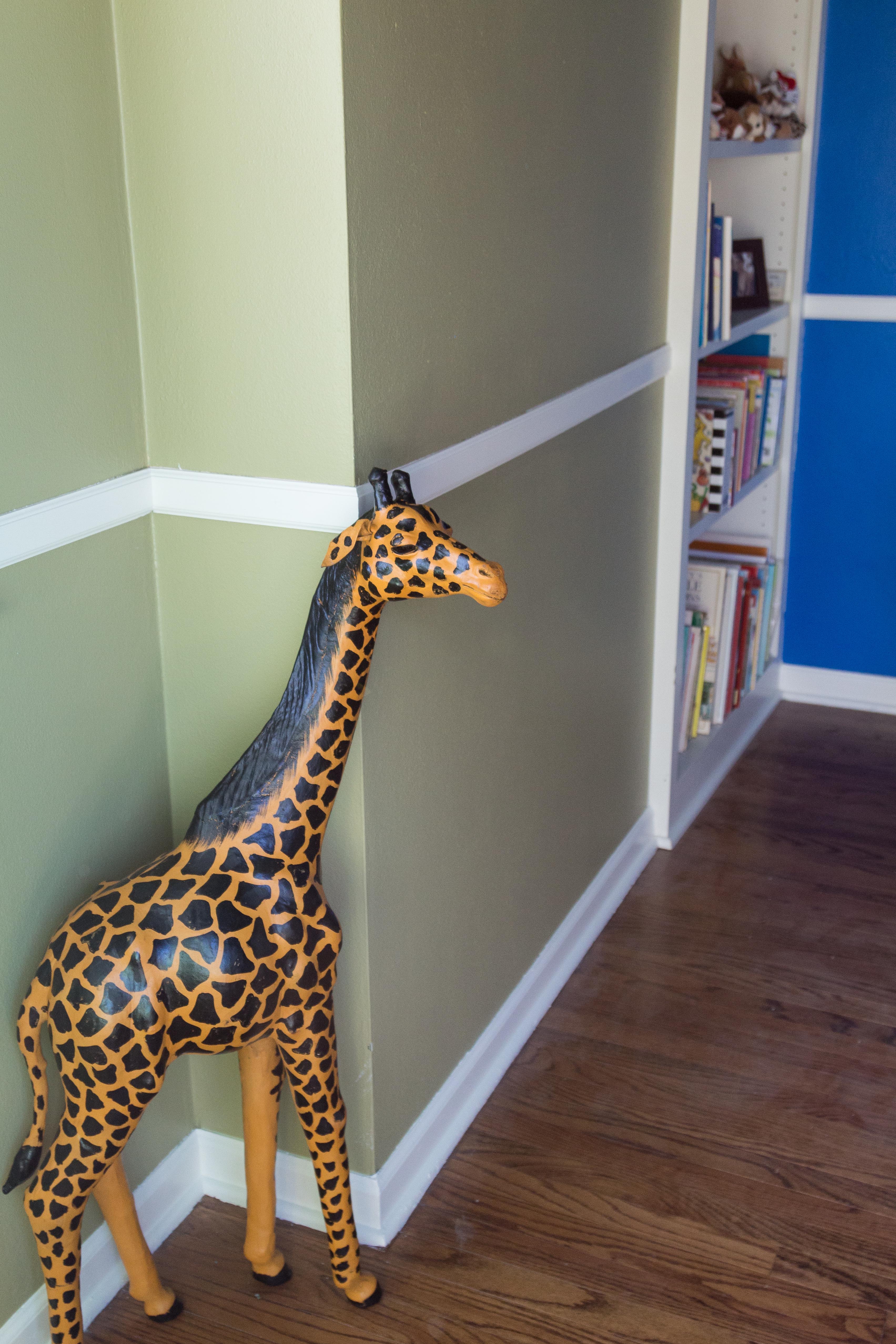 Everything else you see in the room – the quilt, books, stuffed animals, and framed photos – are items we already had. I’ve had them elsewhere in the house, and it made sense to move them up to the kid room before we make our profile book. 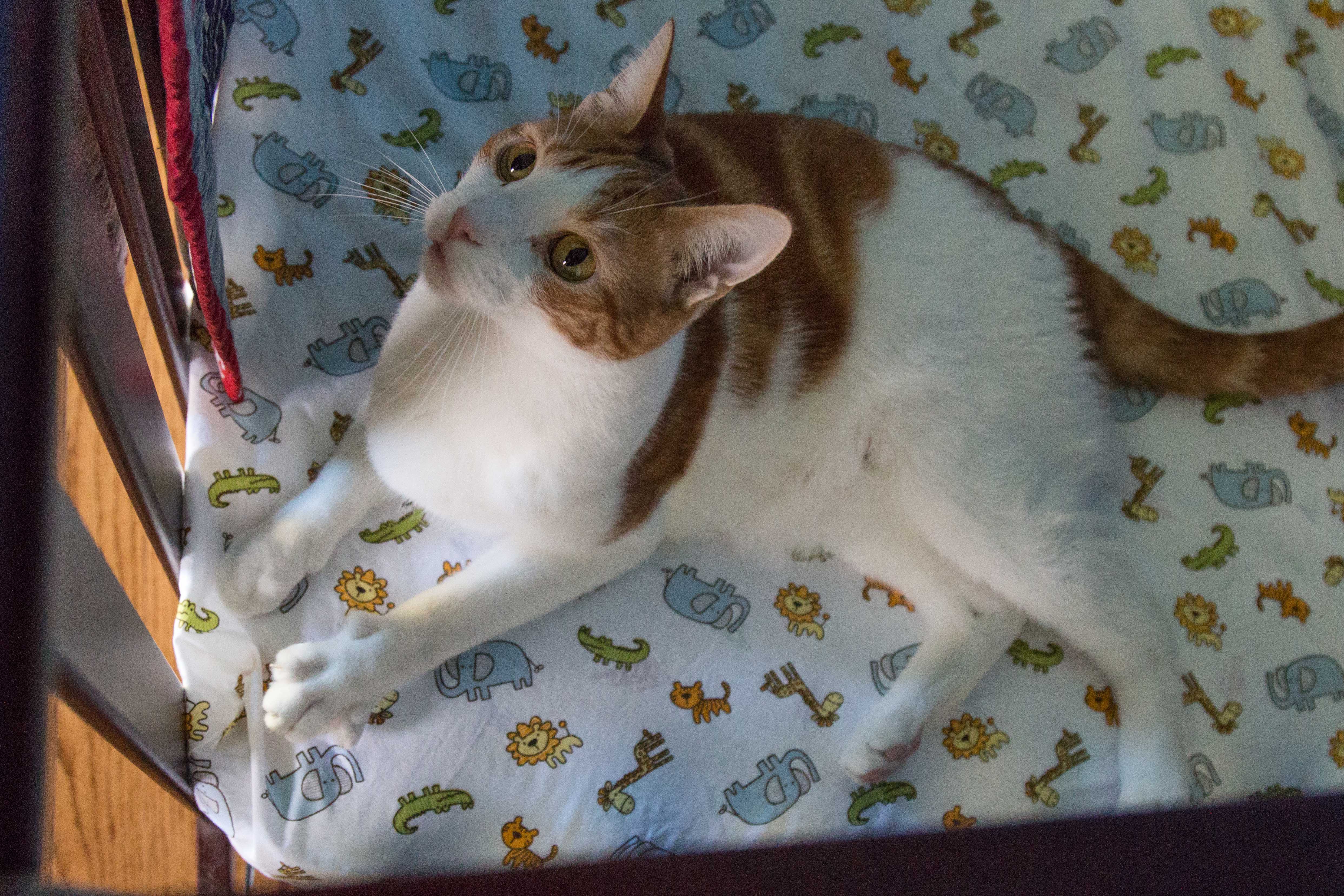 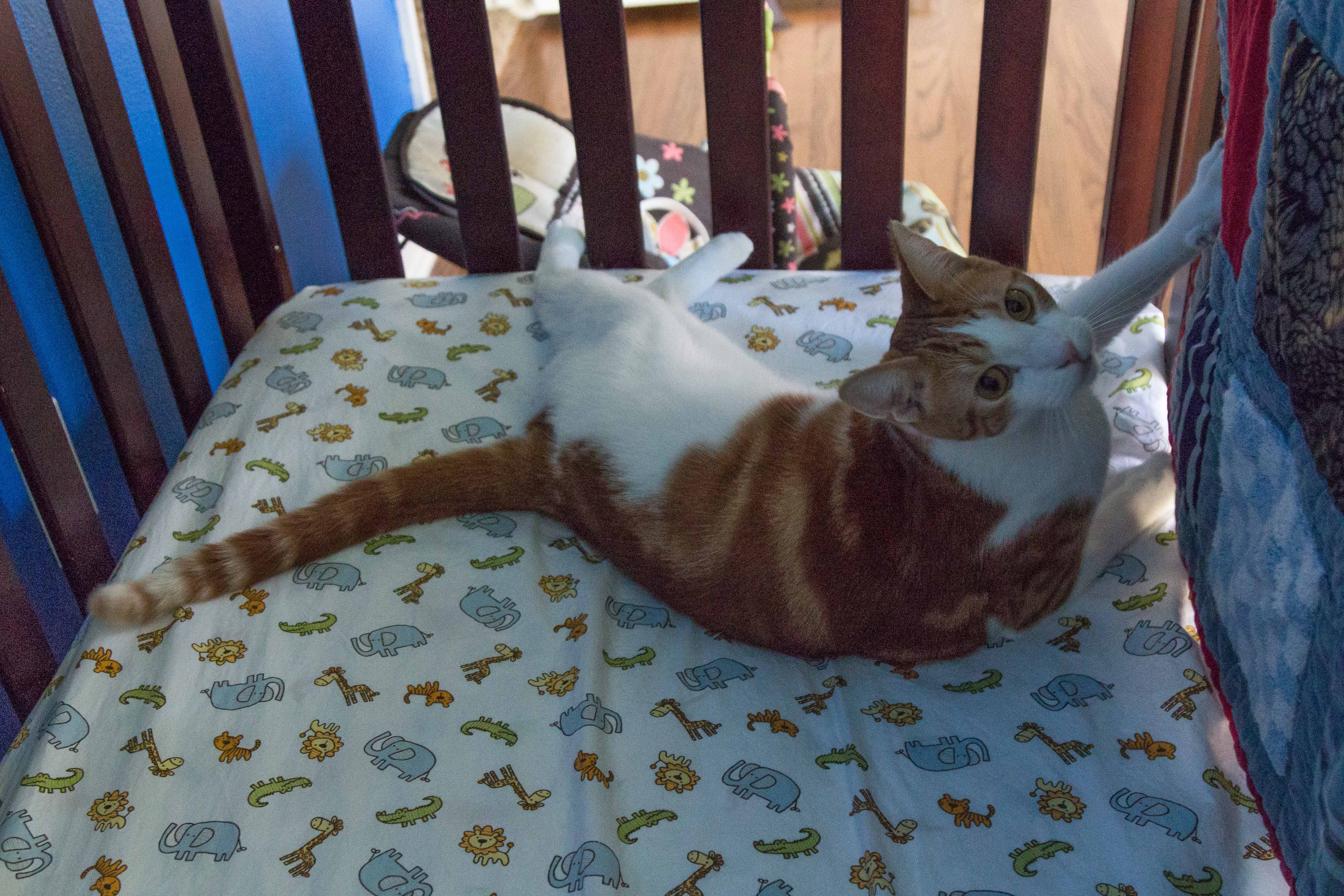 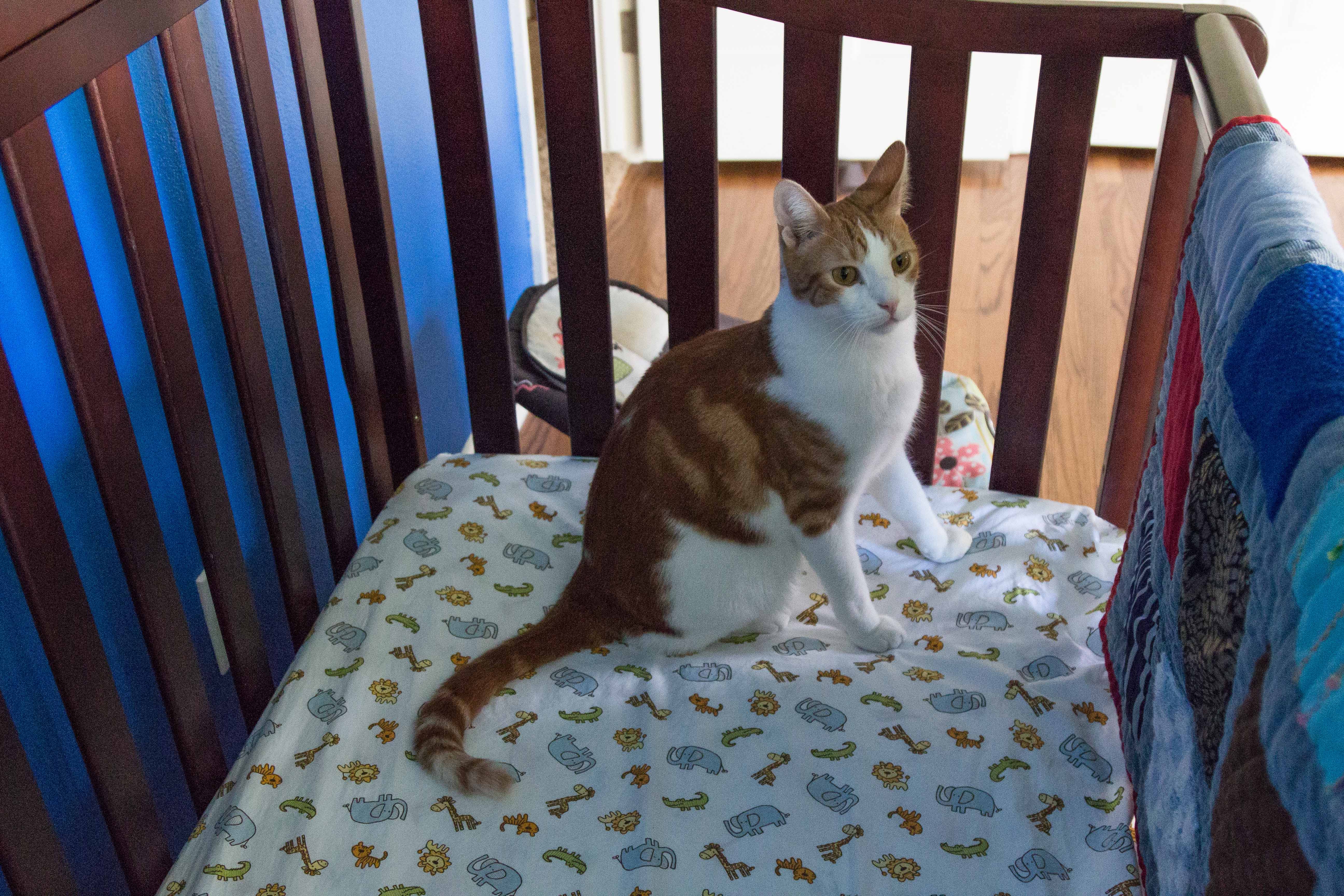 Not surprisingly, Hobbes loves the new baby furniture and hops in the bassinet and/or crib whenever I’m in the room. I think he’s trying to tell me I don’t need a baby because I have him and he’s so cute.

Obviously, we have no idea if we’ll be adopting a boy or a girl so we’re keeping the room gender neutral. I’ve always liked the idea of having a simple, colorful kid’s room and then personalizing it more as the kid grows older and can have a say in the decor choices. The giraffe inspired a bit of an animal theme, but again, it will be pretty simple with a small selection of animal items without being overly matching or coordinated. 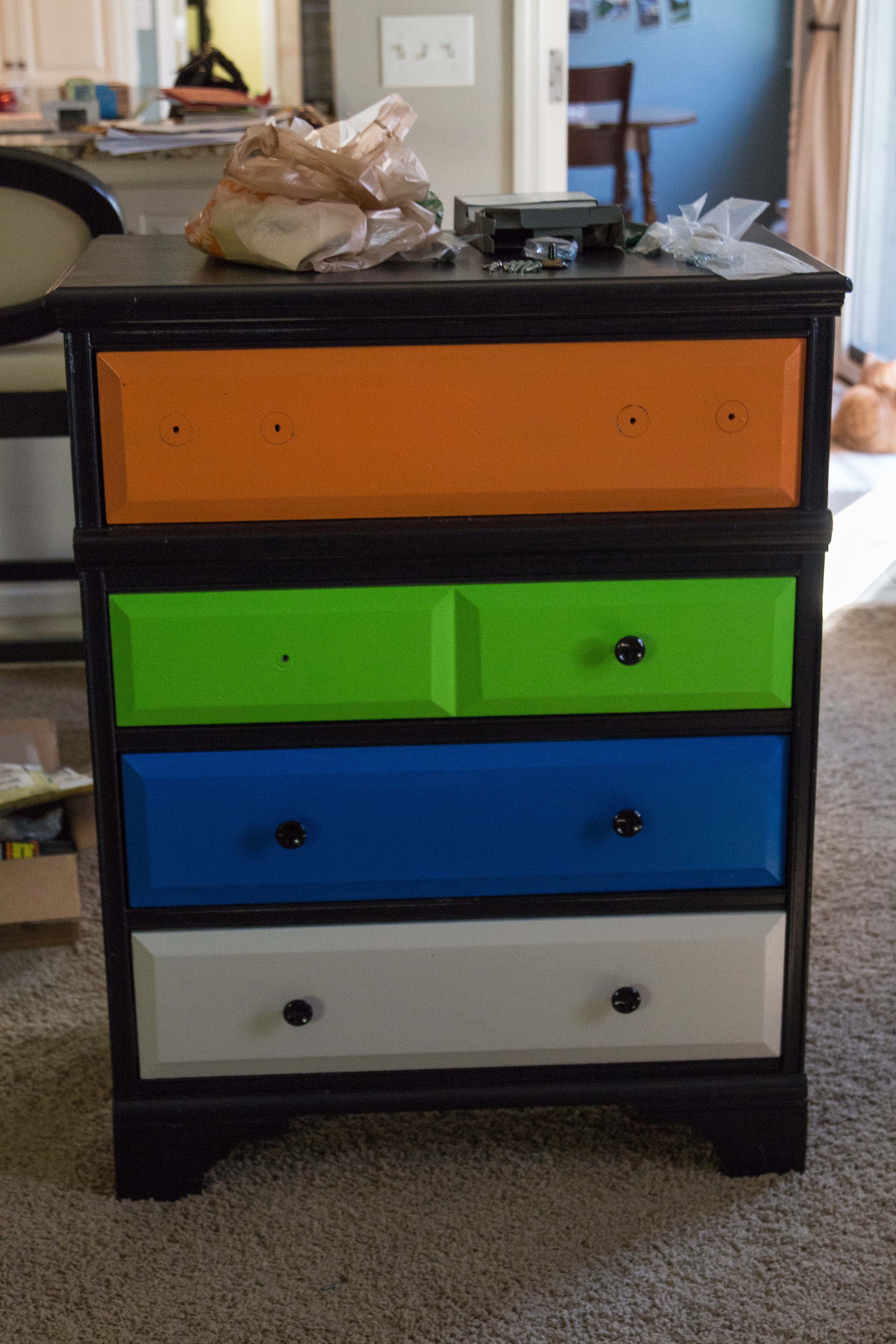 I do have a few projects I’ll be working on over the next month. The first is painting the dresser. I’m okay with the current paint colors, but the main frame needs a new coat of paint and the drawers need new hardware, so I’m going to paint the frame and drawers. It’s not a surprise that I love color and as such, like the different colored drawers. But I know not everyone loves this level of color. As such, I thought about toning it down, but Jake likes the different colors so most likely I’ll stick with that idea. I’ve portrayed it here in something of a sad state with lots of distracting elements behind it and some of the hardware removed (so I could get properly sized pieces at Home Depot) so you’ll be really impressed with the makeover.

I’m also going to work on a few wall art pieces. The turquoise frames I have stacked on the top built-in shelf will have a few prints from FlorandFawn. These prints are the one total splurge for the kid room that I feel no guilt about whatsoever because I’ve been a big Katie Daisy fan for years and have wanted some FlorandFawn prints ever since she opened up this second shop. If I didn’t hang them in a kid room, I would find another spot for them in my house.

I took advantage of a 50% off sale at Michaels to get a few canvases for some large-scale, colorful art. The wall space above the crib is massive, and small art will just look out of place. I’m planning to make one each of the following three tutorials: Like a Musical Ride, A Little Craft in Your Day, and Robin Egg View. Again, it will be a time-consuming project that I know will feel ridiculous and make me wonder what I’m doing at times. But I’m hoping that creating beautiful, colorful art will also be helpful in some way, too.

Finally, I’m thinking about displaying a selection of 4×6 animal photos in a couple collage frames. I have some collage frames on hand and have taken dozens and dozens of animal photos during numerous trips to the Milwaukee County Zoo. It would fit the theme nicely, again, without feeling overly matching. 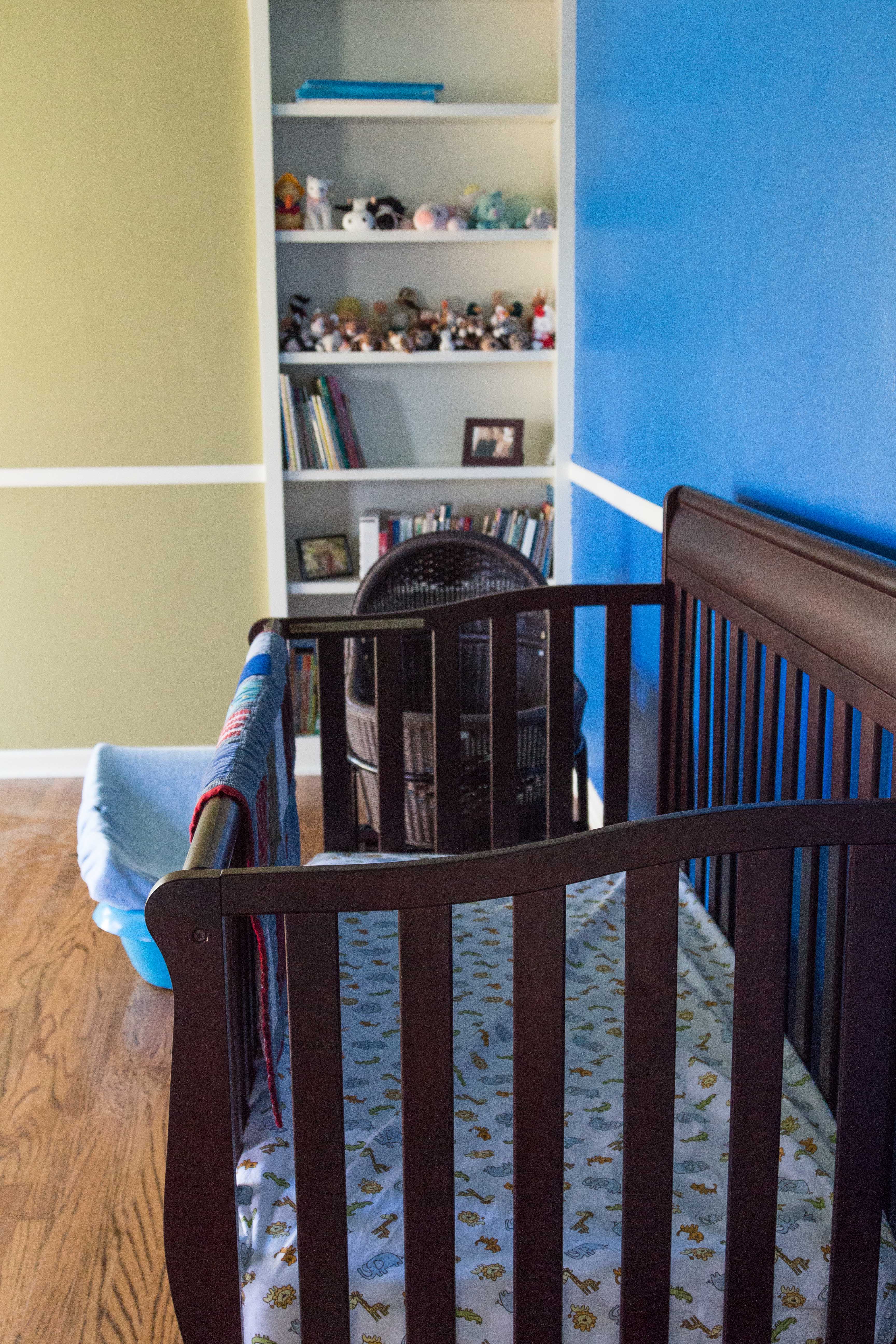 Over the next month, we’re going to have the third (of three) home visits, and we’ll be working on completing our training hours for the state and putting together a profile book. Getting the fingerprinting redone is the biggest unknown in the time frame. It’s entirely possible we’ll both fail again and have to get name checked instead (and no, I have no idea what that means), and it’s unclear how long that will take. But we’re on track to finish up everything else before the end of the year so hopefully, it won’t hold us up too far into 2017.

If you read all 1,700+ words, thank you. I don’t plan to post about the adoption process too often at this point in our journey. (If we are able to adopt, that may change, of course.) But if you’re ever curious how things are going currently, don’t hesitate to ask.