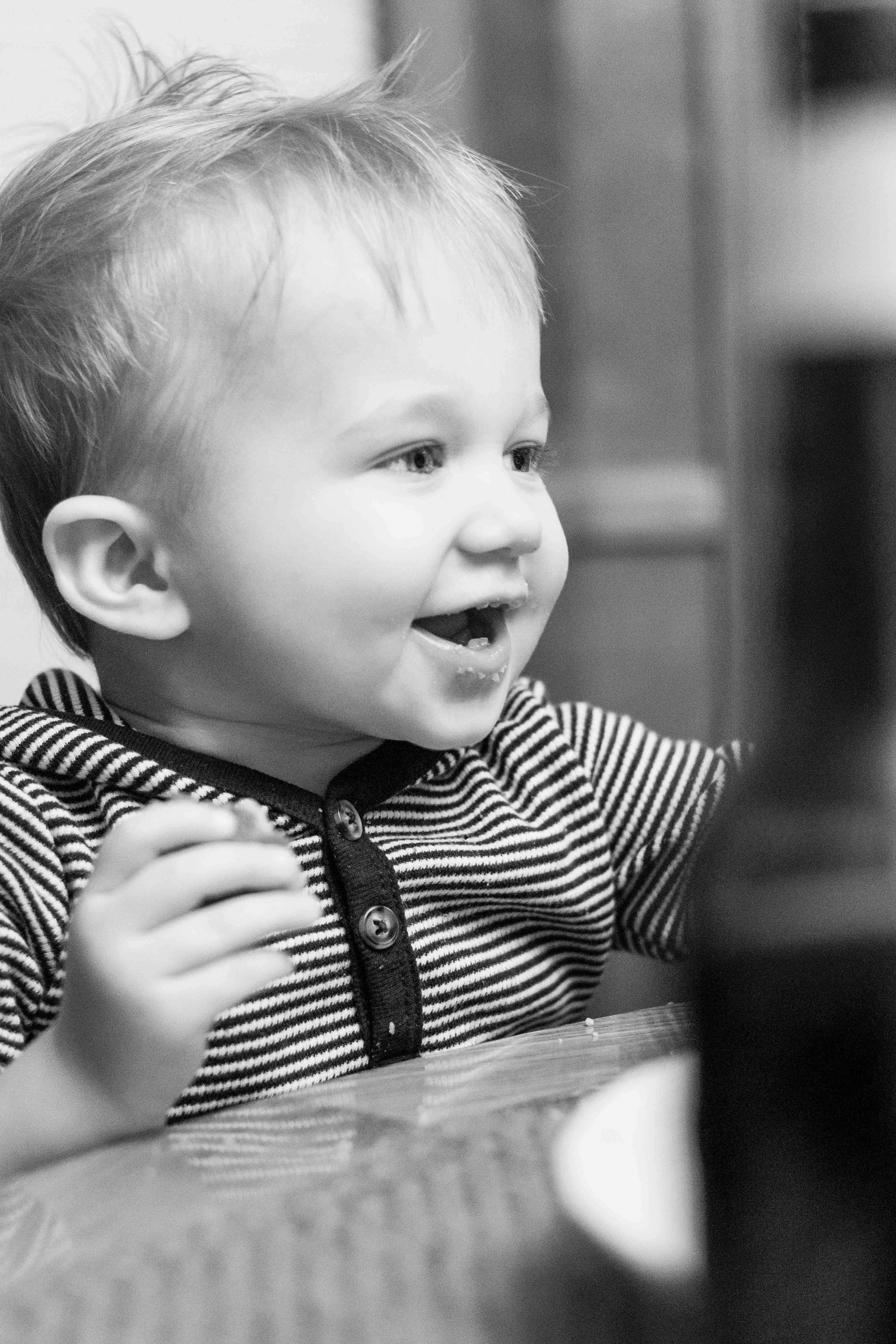 Our Tommy turned 18 months old this past week. His 18-month doctor’s appointment is nearly two weeks after his actual 18-month birthday. I didn’t want to wait that long to finish this post, so I’ll include that information in the next update. 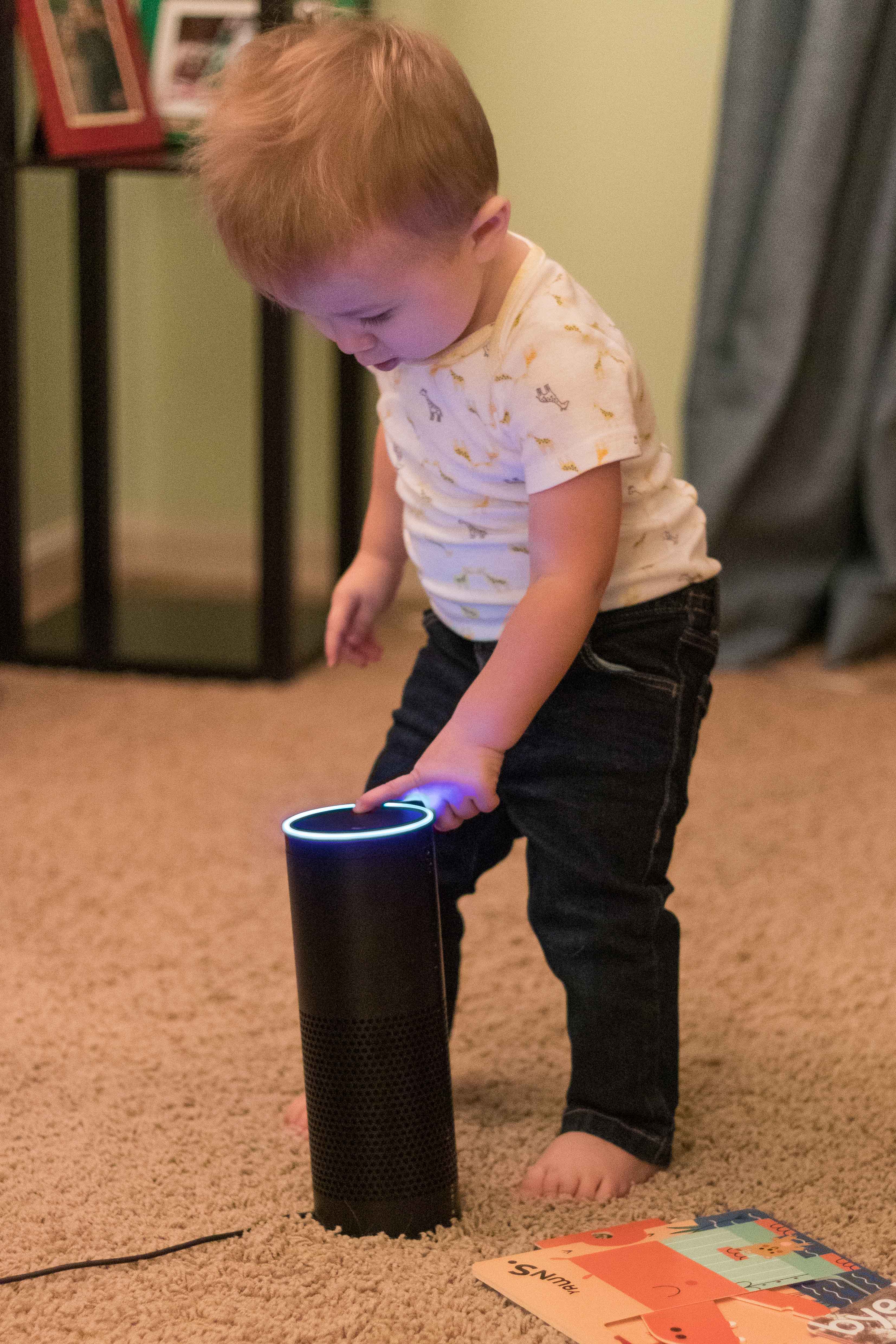 Tommy is talking all the time. This past month, everyone has commented on how much it’s starting to sound like regular talking. At least 90% of the time, it’s still complete nonsense. But every once in a while, we get a really clear word or phrase. He uses a lot of expression and inflection, giving you some idea what he’s trying to articulate (sometimes anyway ha), even when the words are nonsense. Tommy picks up expression and inflection really well and often mimics our speech patterns and moods. The new words that Tommy says consistently are “cheese” and “teeth” (as in “brush your teeth”). He points to his nose and teeth correctly when prompted. As he can say “teeth,” sometimes he’ll say it and point to his teeth all on his own, too. We’re still working on other body parts. 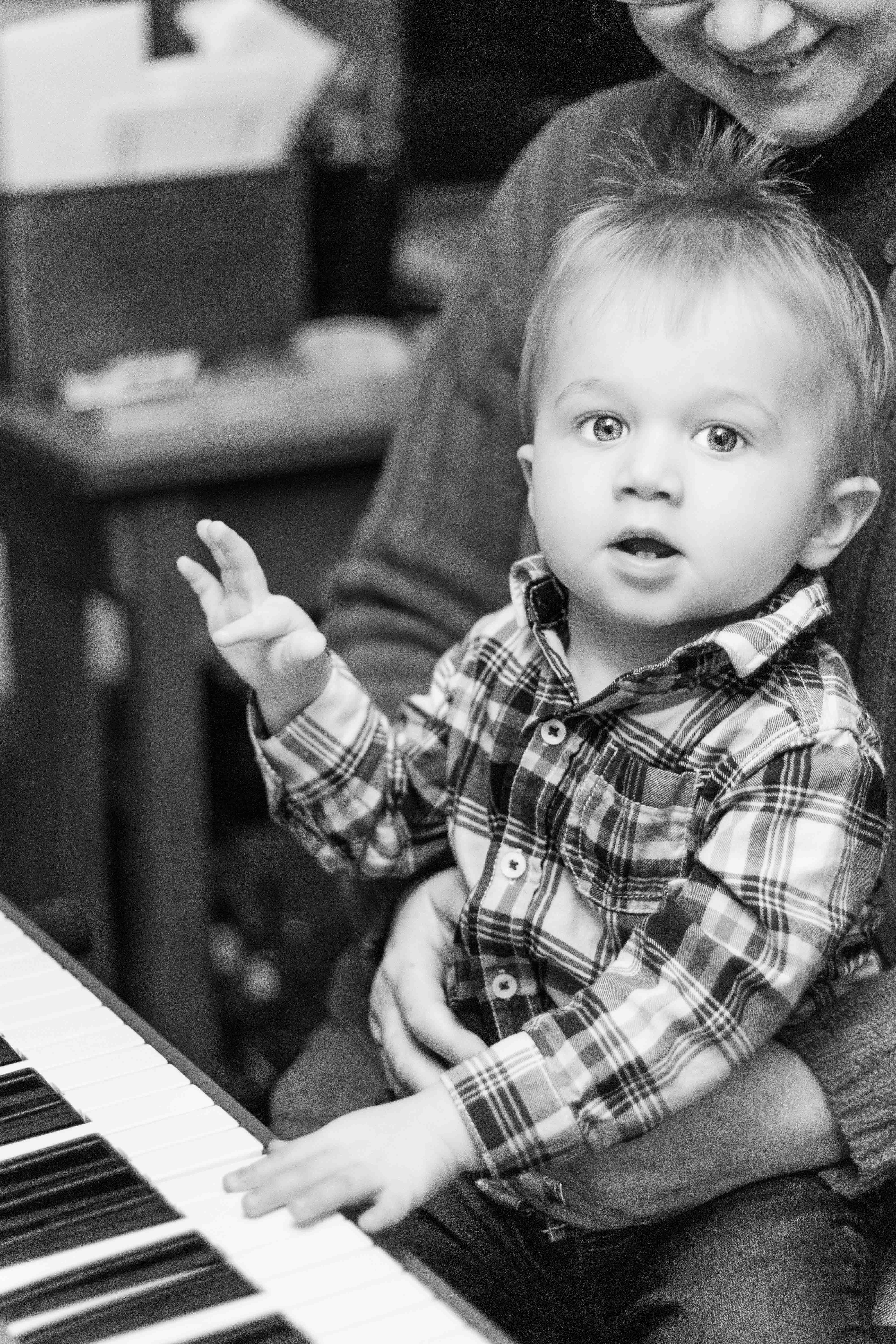 Tommy’s motor skills blow me away all the time. It’s hard to believe that he was just starting to walk independently four months ago. Now he’s running all over the place, maneuvering large objects (from pushing the Cozy Coupe around to carrying big boxes), going up and down the sunken living room stairs, and executing some pretty complex steps when he’s dancing or Light Saber fighting. He has more interest in gross motor than fine motor activity but continues to develop his fine motor skills as well. Tommy does really well eating with a fork and is getting smoother with using a spoon. He’s starting to color with pens/pencils and crayons a little bit (although he’d usually rather eat the crayons, but that’s another issue). 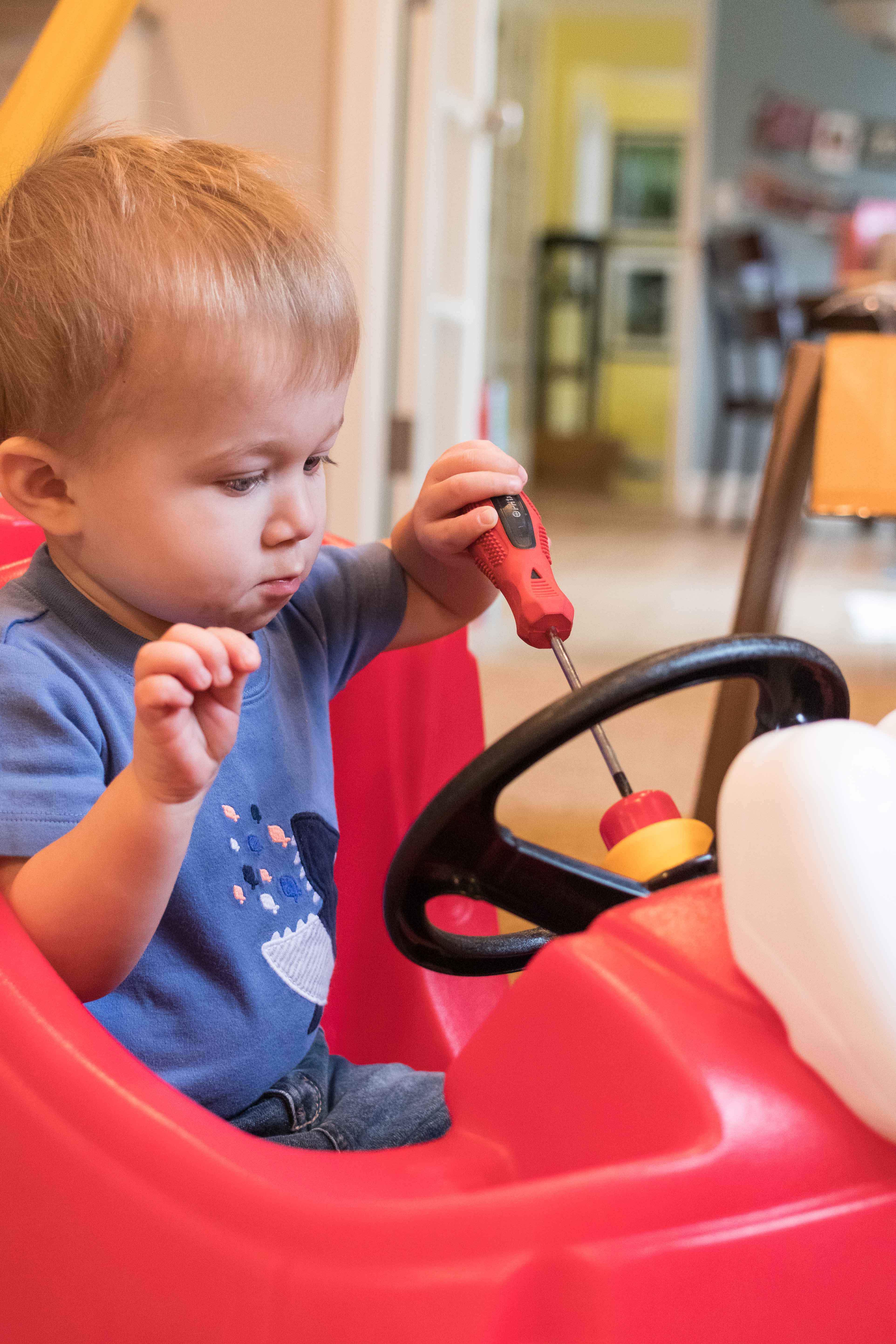 Tommy is in full toddler mode and doesn’t like being told “no.” He usually throws something (i.e., his Wubbanub, a toy) in response to no and will sometimes throw himself on the floor as well, which is exciting when you’re carrying him or he’s on a hardwood or tile floor. It’s tough when it’s a situation that’s not negotiable, such as not being able to throw his Wubbanub into the water at the conservatory. Other times, it’s pretty funny. For example, the other day, Tommy tried to offer Jake a half-chewed cookie. When Jake turned down the offer, Tommy threw the cookie at him. 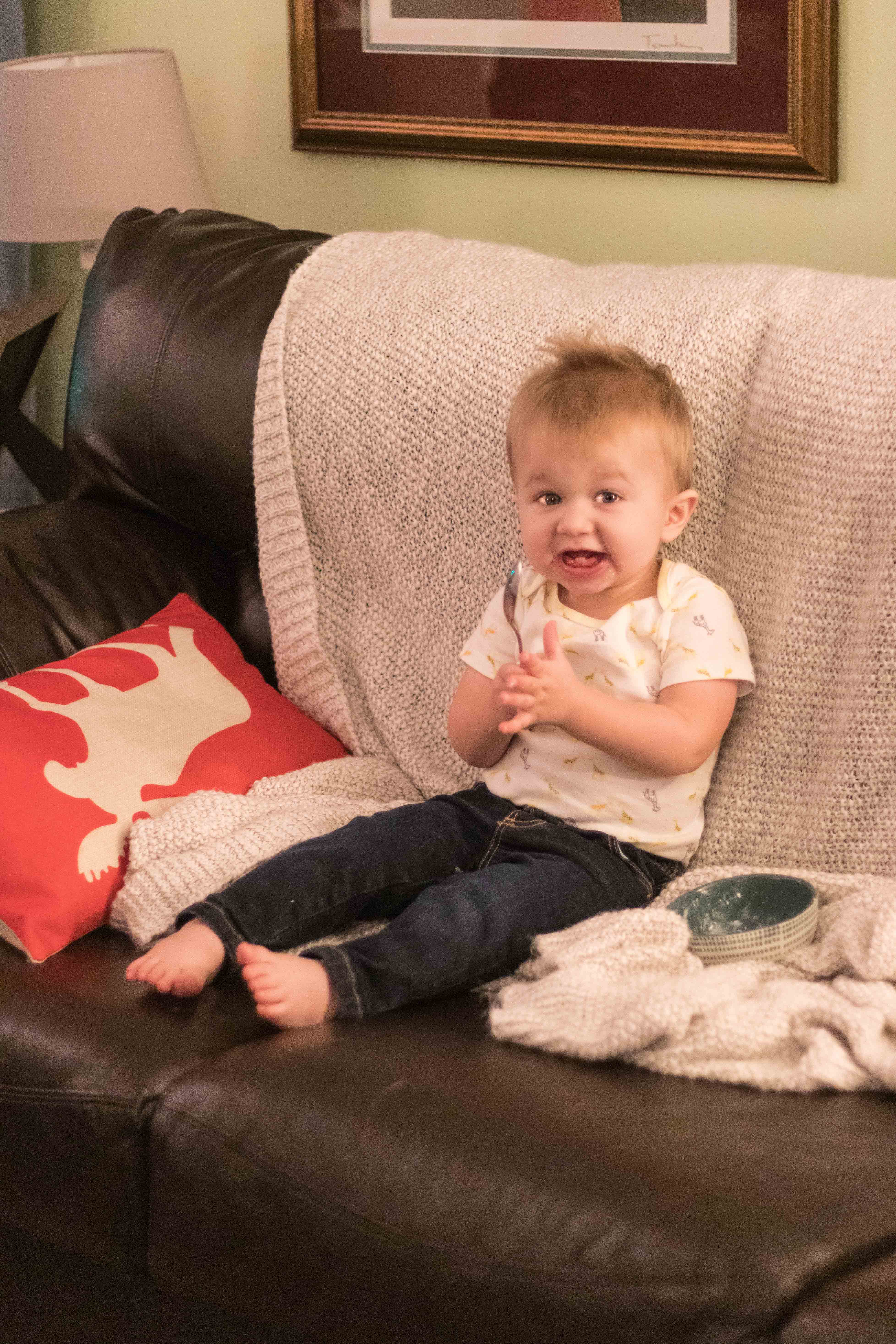 Tommy’s in a meal routine where he eats a big breakfast, small lunch (right before his one 2-3 hour nap of the day), and medium-big dinner. He likes fruit, toast or frozen waffles, and scrambled eggs for breakfast. Usually I give him summer sausage, cheese, and crackers or dinner leftovers for lunch. When he gets up from his afternoon nap, he has his second milk of the day (the first one is with breakfast) and a snack, generally an assortment of Gerber baby/toddler foods. Then Tommy eats what we’re eating for dinner, sometimes with some summer sausage for extra protein. In typical toddler form, some nights he has zero interest in dinner. But he usually does pretty well with it and will sit and eat for 15-20 minutes. 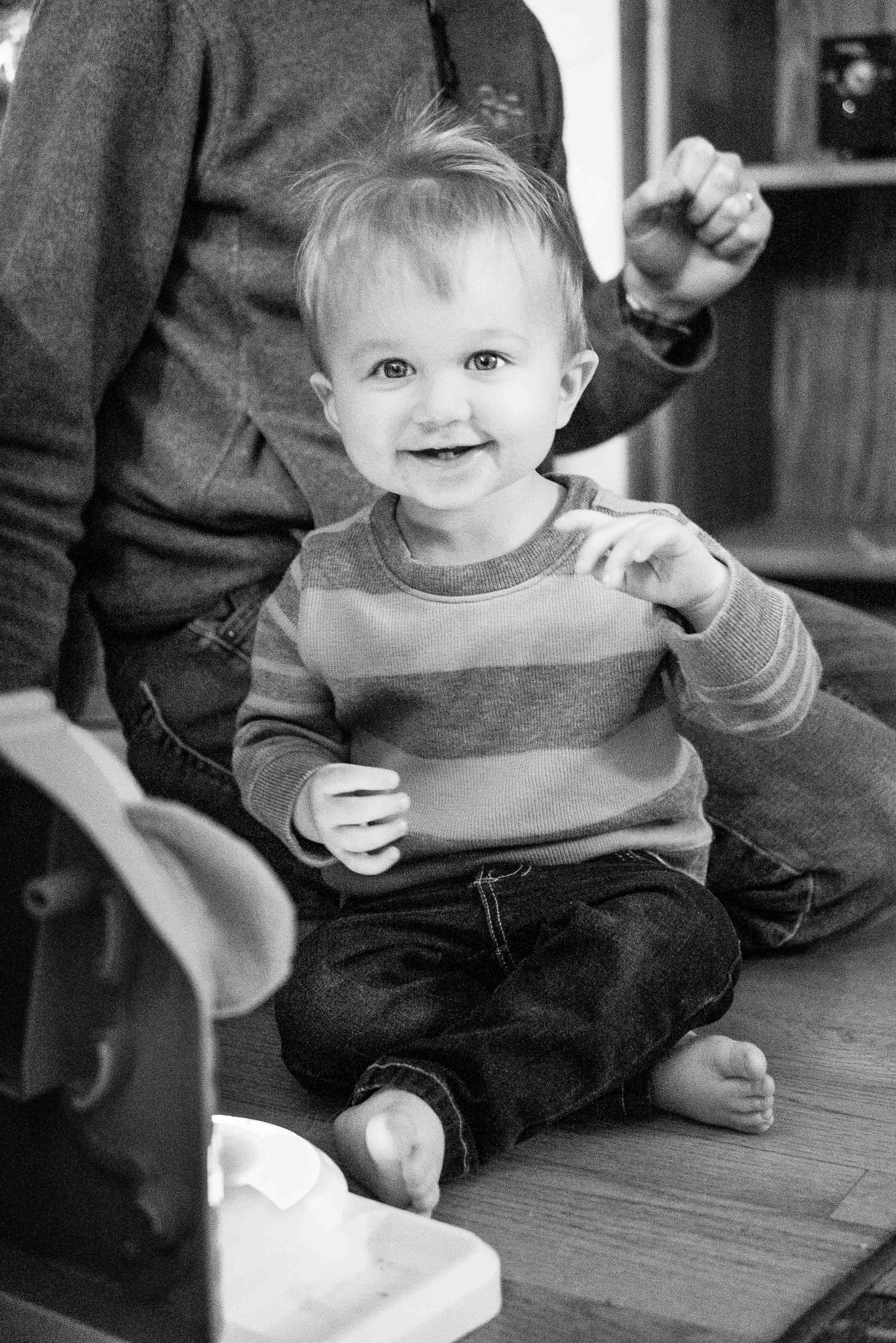 Tommy has been cutting his molars before the rest of his teeth fill in. He has top and bottom molars now. He has most of his top teeth and just the four bottom teeth. This pattern is a little unusual but no reason for concern. 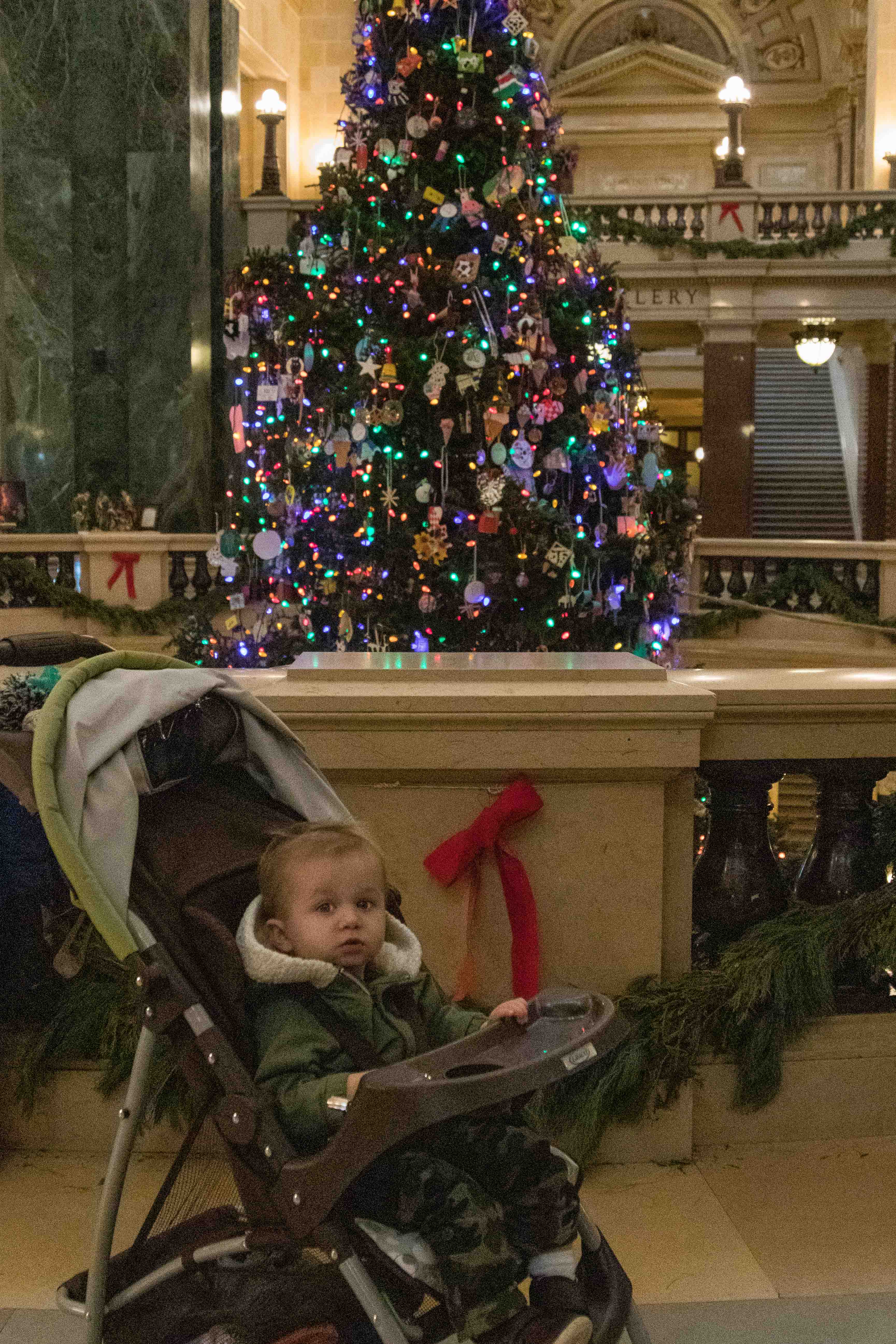 Right before Tommy turned 17 months, we took a day trip to Madison to visit our good friends who moved there this summer. I already had the last update ready to publish when we took the trip. So I’m including it in this update. Our friends’ boys are five, three, and 10 months, and Tommy always has a great time with them. We visited the holiday train show at the Olbrich Botanical Gardens and saw the Wisconsin Capitol decorated for Christmas. 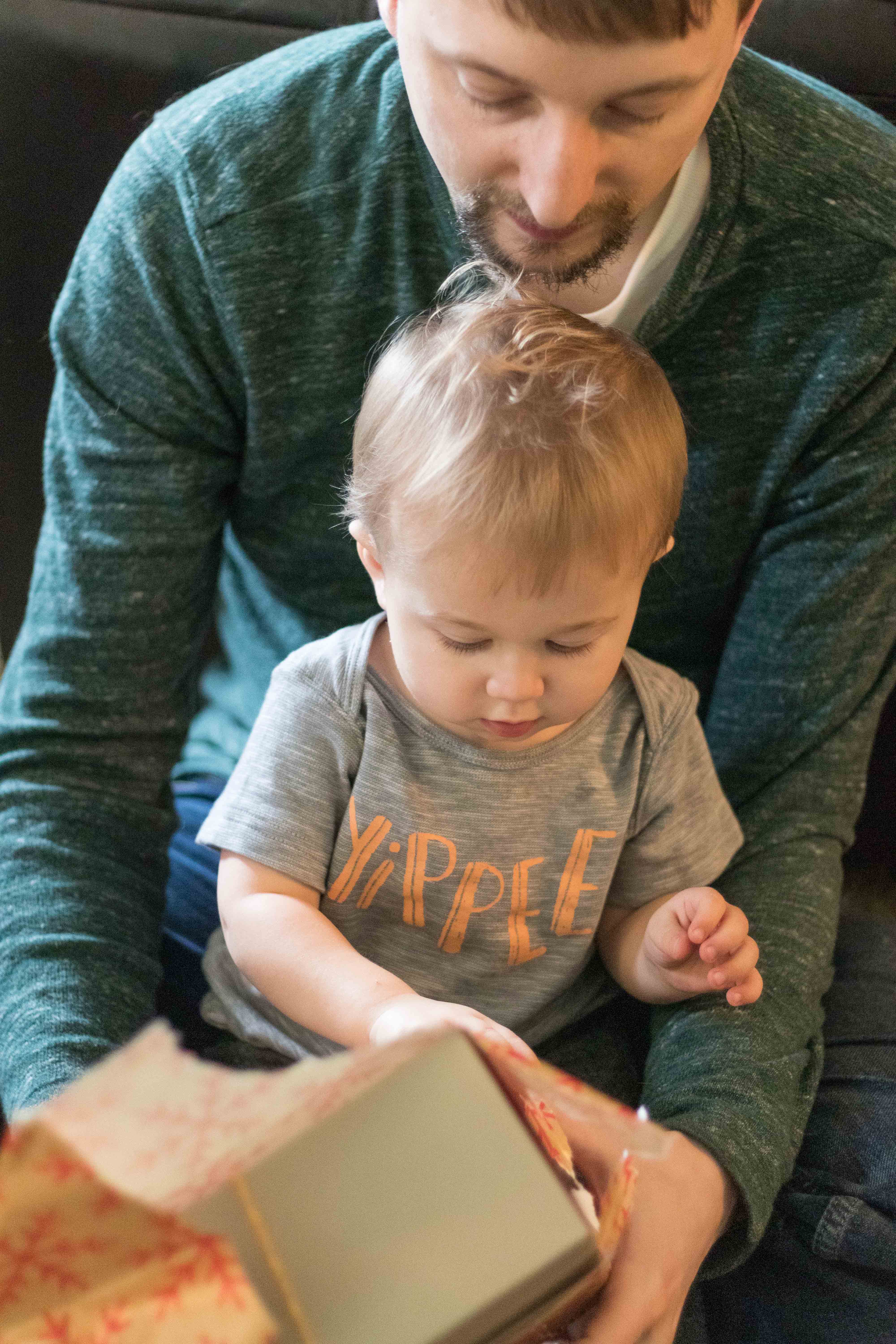 We had a wonderful Christmas. Tommy enjoyed himself through Christmas Eve mass, family Christmas at home, two visits with his birth family, and time with both of our families. Christmas Day was a long day with family Christmas in the morning and time at my in-laws’ house in the afternoon and evening. We were able to space out the rest of the celebrating a little more and keep Tommy in good spirits. Tommy receive a wealth of fabulous presents. Just a few of his favorites thus far have included a handheld fan, spinning gears set, Cozy Coupe, and mini drum set (yes, we voluntarily bought drums for our toddler).

Right after the new year, Tommy started a winter swimming lessons session. It’s for just half an hour once a week. Parents are in the water the entire time. While Tommy’s enrolled in lessons, we’re also able to attend open swim. It’s offered a few times a week, at no extra cost. I’m hoping we’ll be able to take advantage of open swim at least a handful of times, especially while the weather is still cold. As of writing this update, we’ve only been twice. So far it’s going really well. Tommy has tried everything (i.e., blowing bubbles, kicking in the water) and shockingly, charmed his teacher. 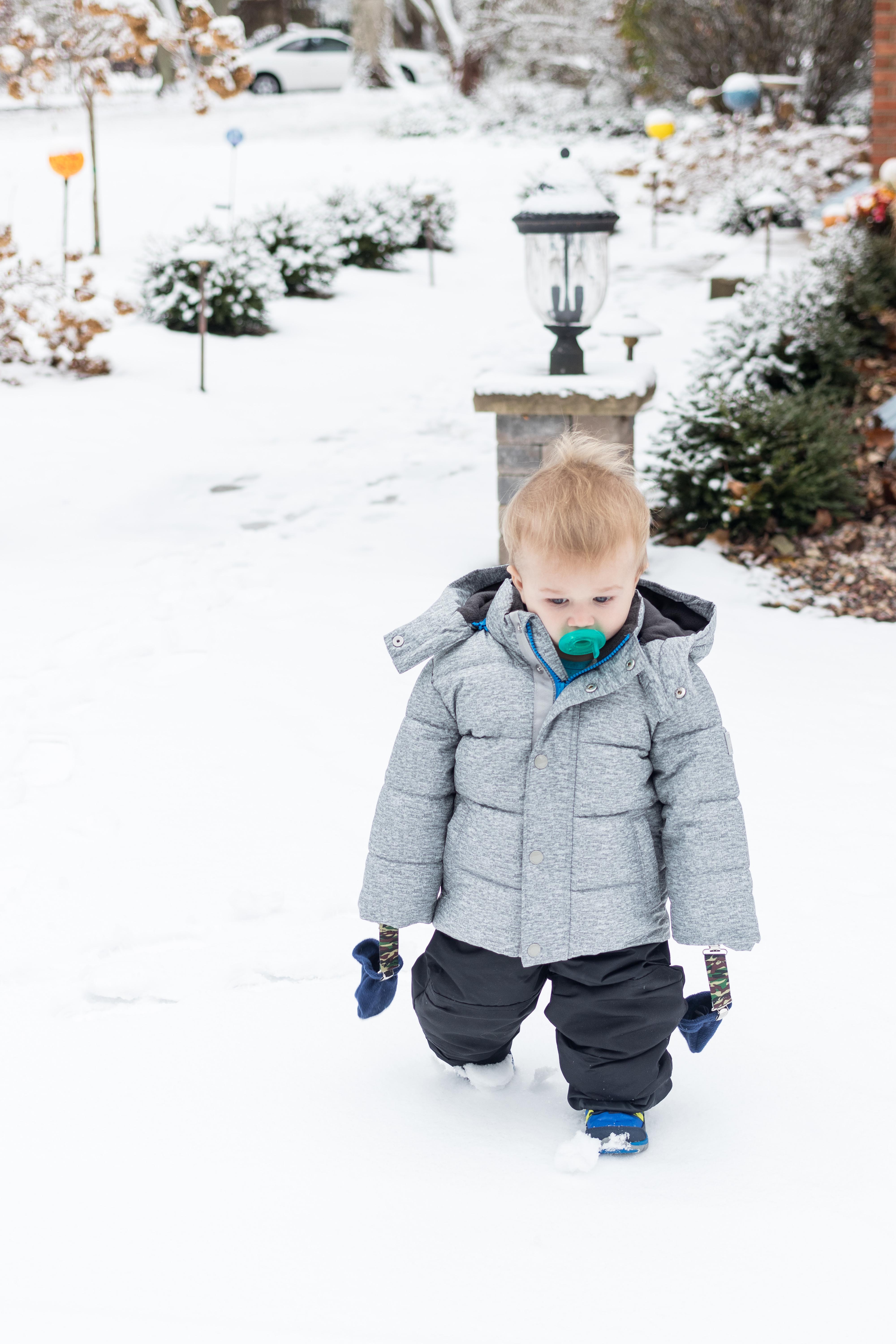 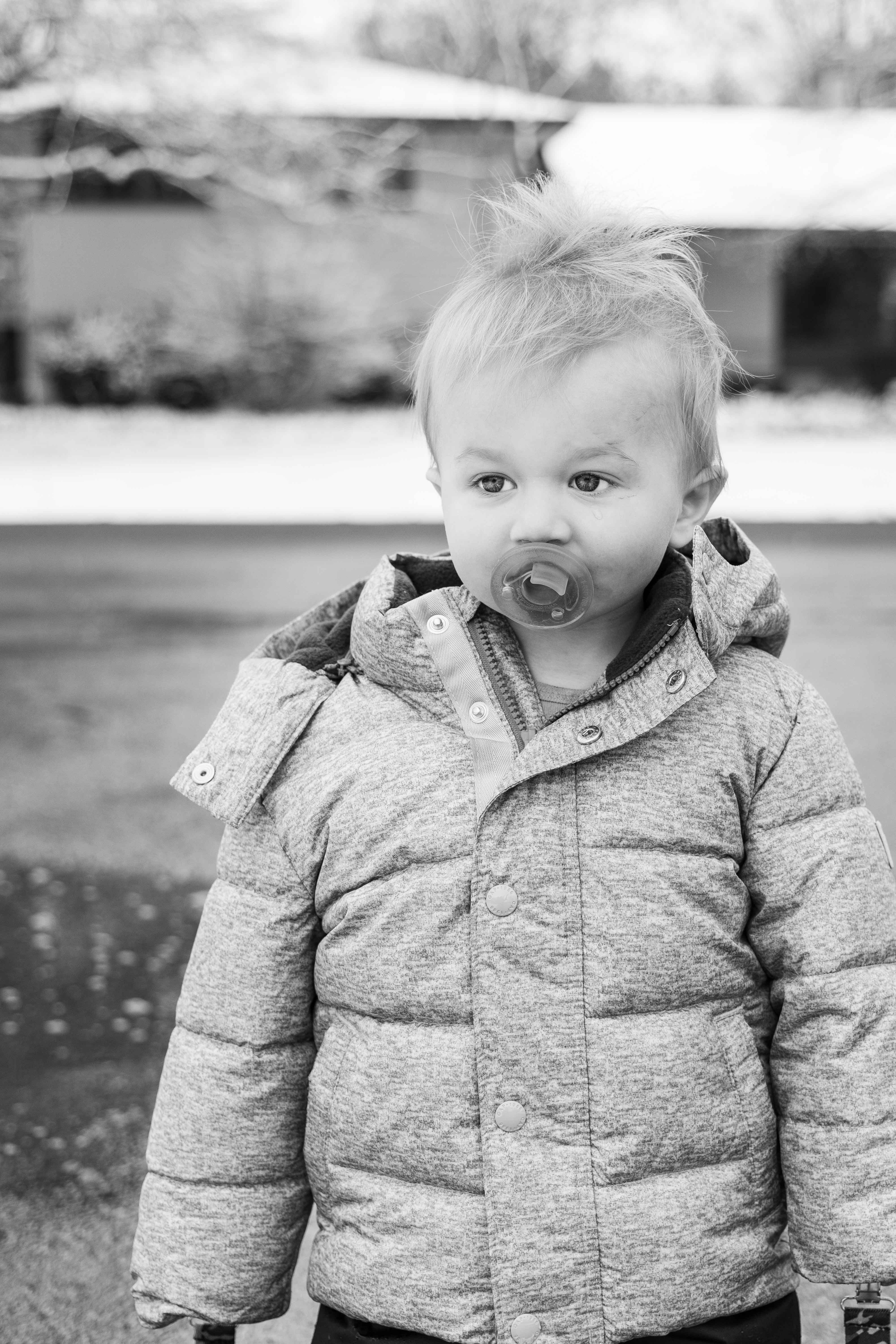 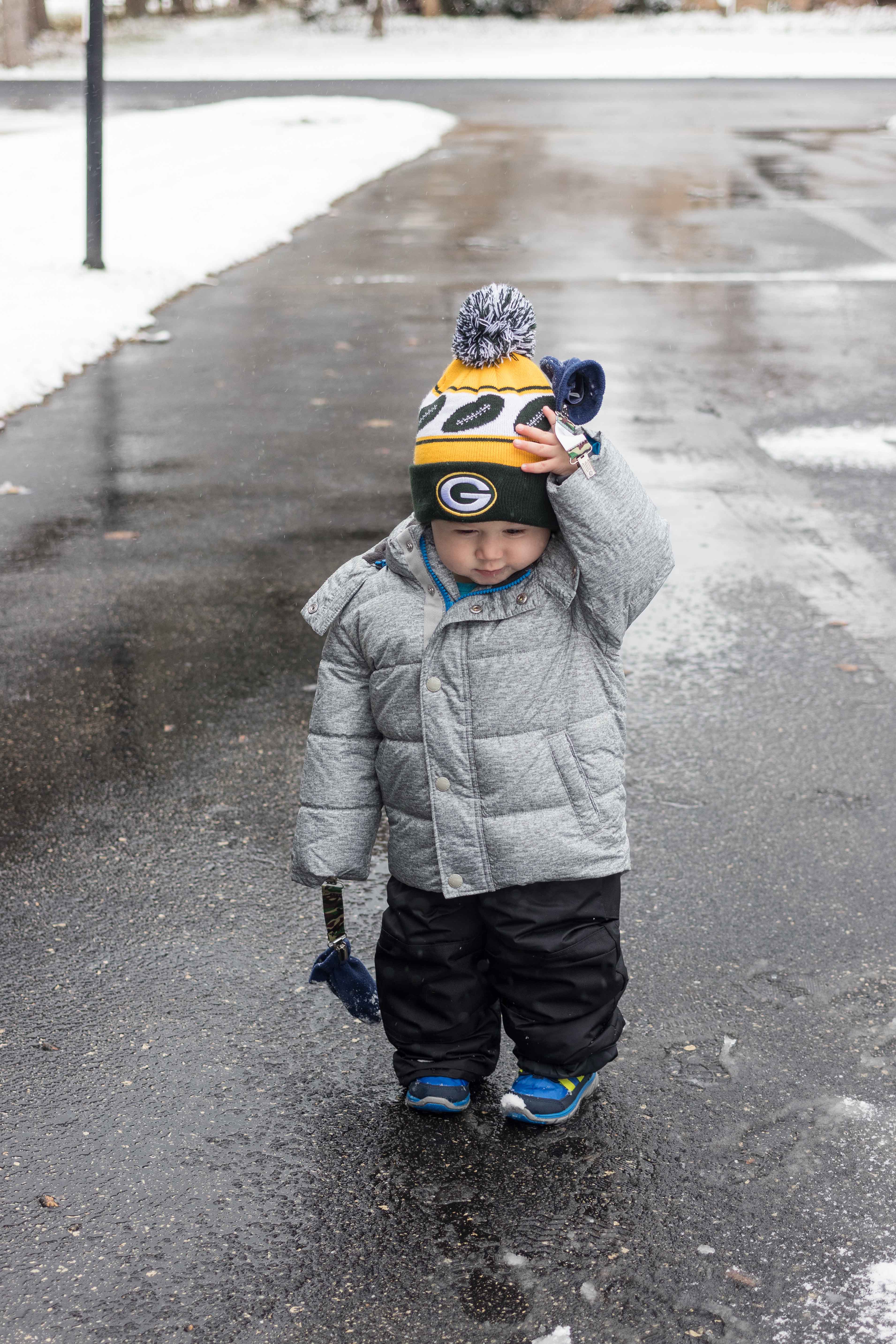 Finally, even though we’ve had zero measurable snow since the 17-month update, I’m cheating and sharing a few older snow pictures. Somehow I failed to include them in the previous two updates. We got hit with a couple of snows before Thanksgiving, which Tommy really enjoyed. My mom got him a snow shovel for Christmas (after he loved raking in the fall so much). We know that he’ll love using it when inevitably we do get more snow later this winter. 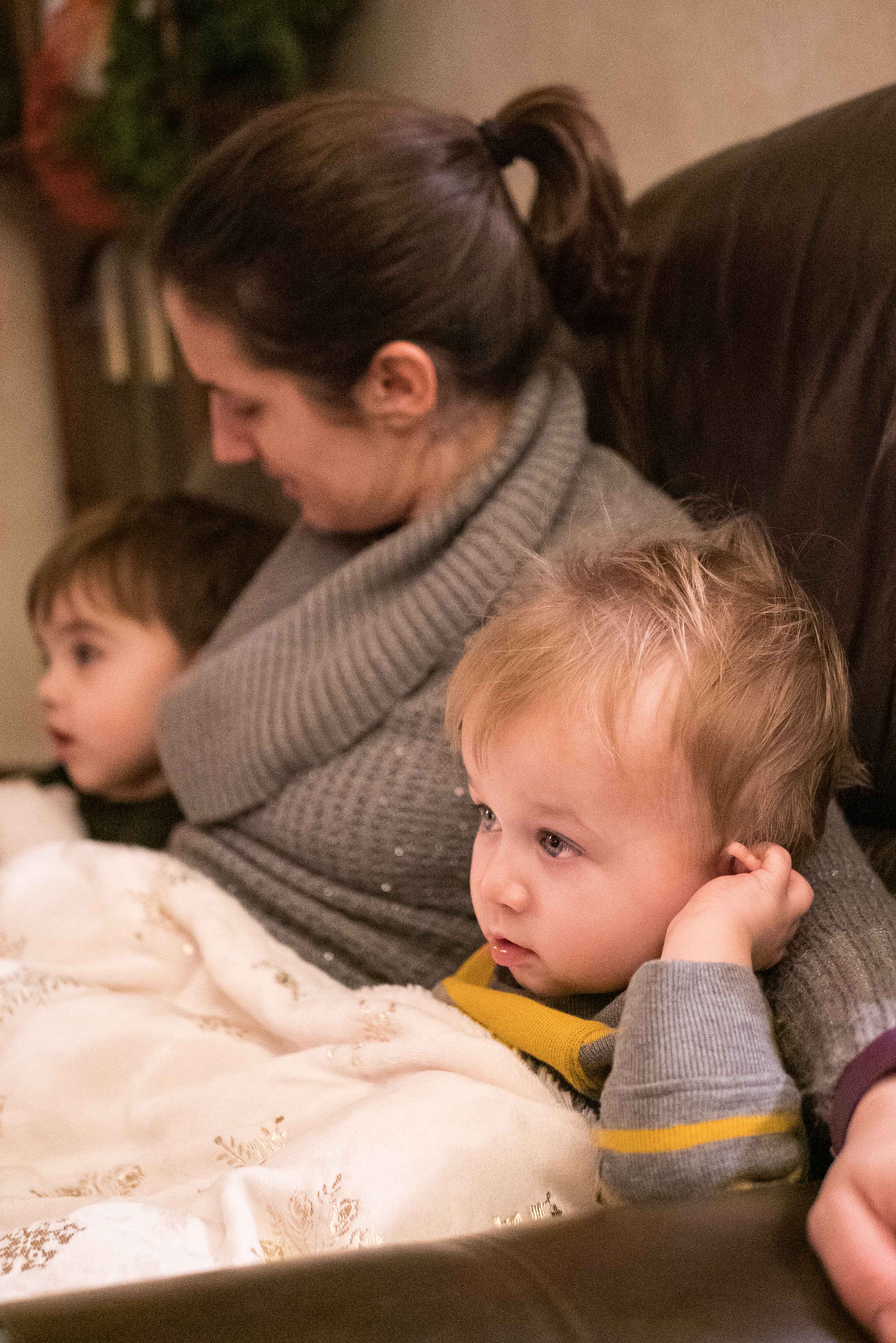