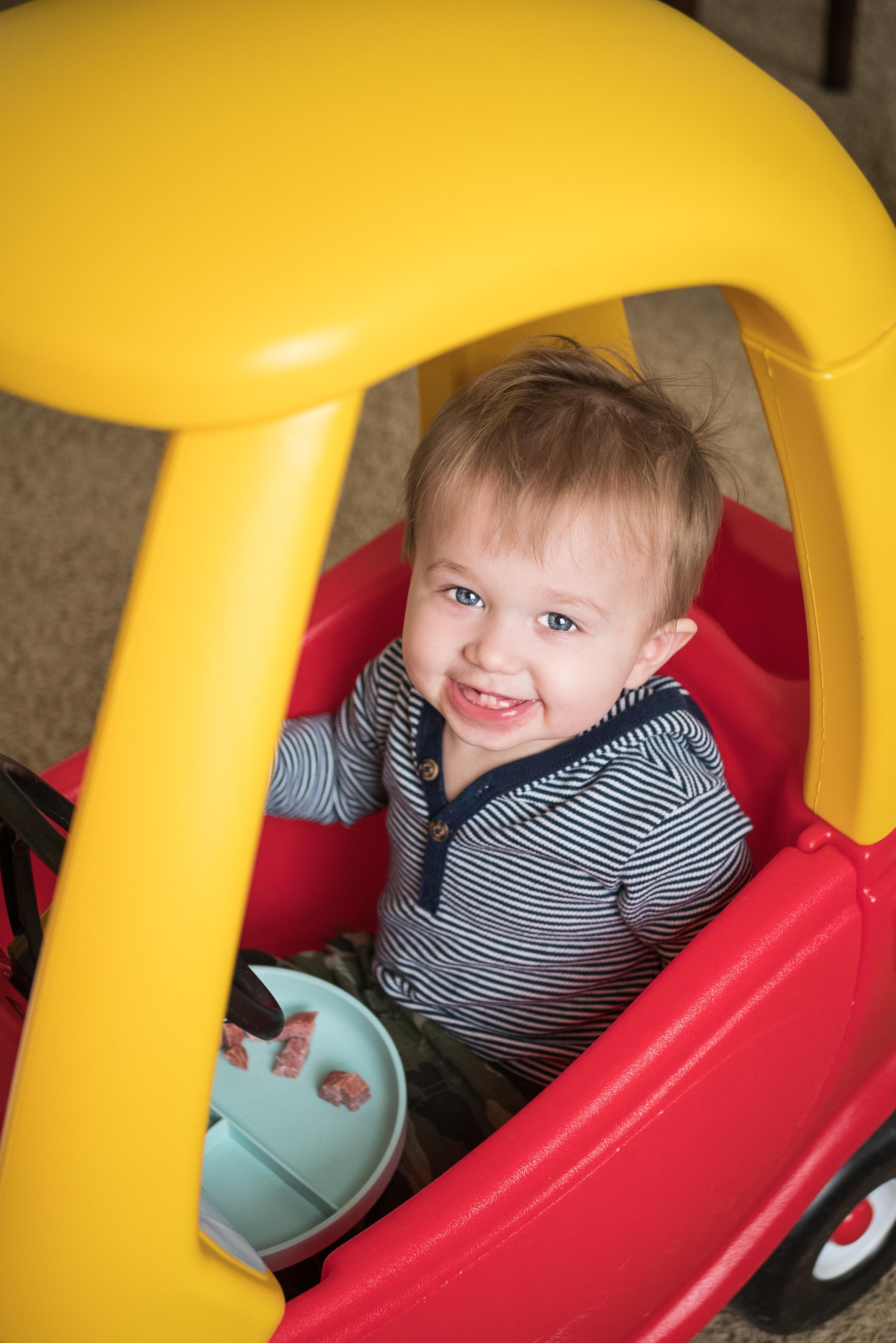 This past week our Tommy turned 19 months old.

At Tommy’s 18-month checkup in mid-January, Tommy weighed 23 pounds 8 ounces and measures 32.25 inches tall. These numbers put him at the 39th percentile for weight and 40th percentile for height. His head measured 18.5 inches in circumference. 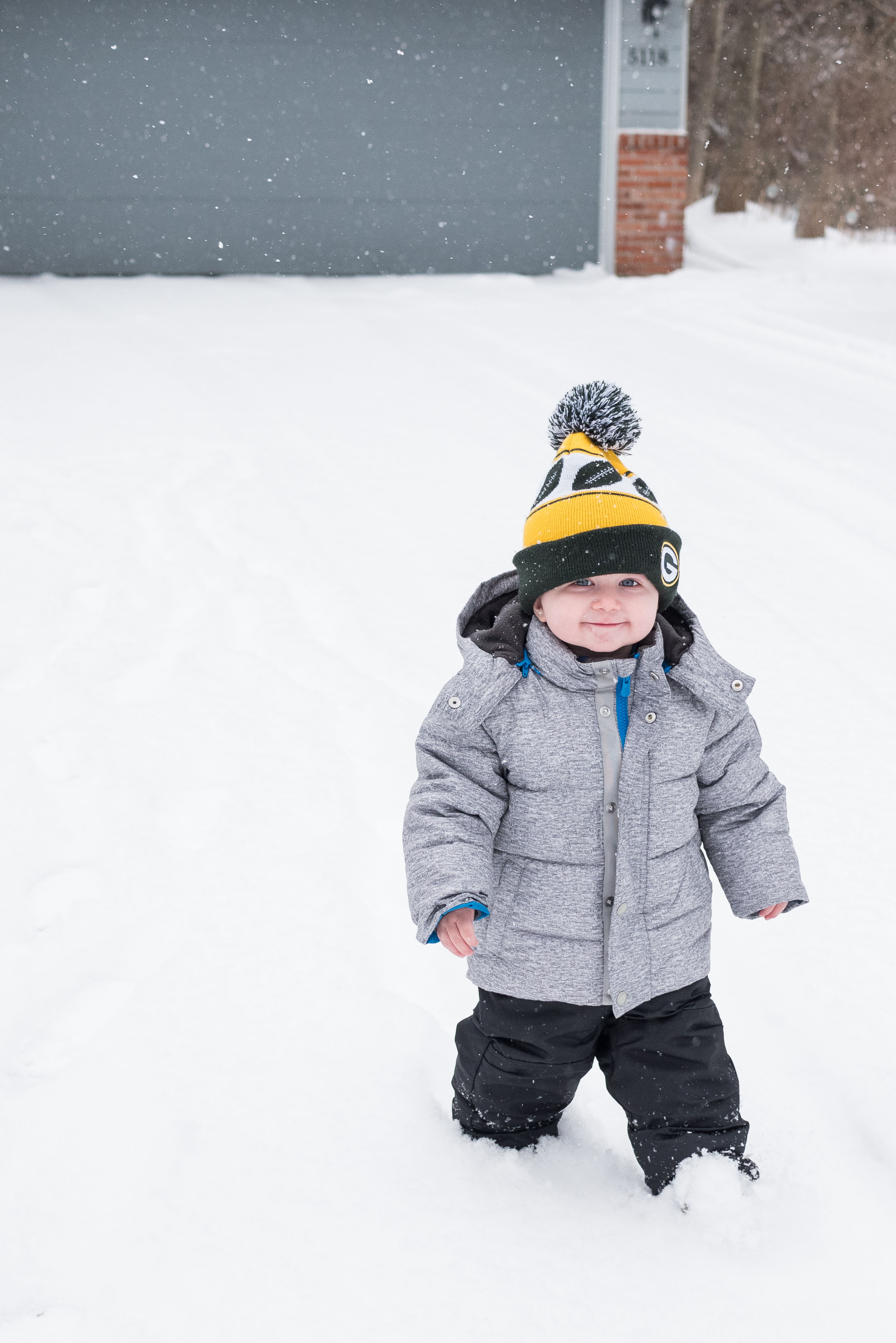 Over the past couple of months, Tommy has gotten the concept of giving kisses. Now he loves giving kisses and will give kisses and blow kisses to people and pets as well as his Wubbanubs, stuffed animals, and other toys. He often gives and blows kisses unprompted. He’ll sometimes give kisses when asked as well.

While also not brand new to this past month, Tommy is taking more interest in and becoming more confident with stacking objects. He has a couple of stacking toys as well as Mega Blocks (like Duplos) and will play with them independently. He also loves finding other random objects to stack, such as Tupperware from the kitchen. Not surprisingly, he enjoys knocking objects down as much as (if not more so) than stacking them. 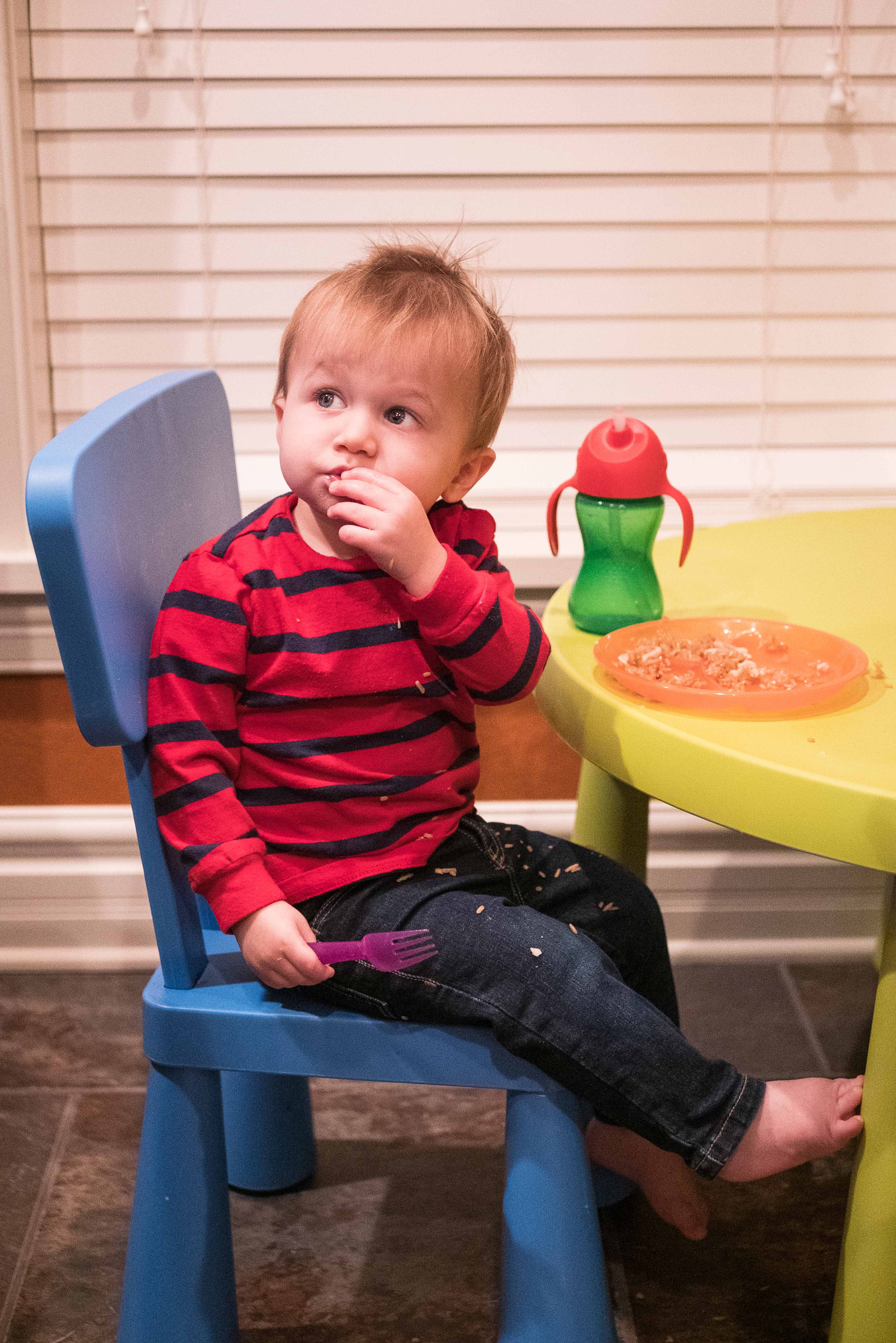 Tommy is an ever-present little helper. He watches everything we do and doesn’t miss a beat. Just a few activities Tommy likes to “help” with include filling the humidifiers, sweeping, loading/unloading laundry from the dryer, and wiping up spills on the floor. He is also obsessed with the dishwasher. He would love to help with loading/unloading dishes, but he isn’t quite old enough for that task yet. Sometimes I do let him push the button to start the wash cycle, which he enjoys as he loves buttons so much.

Tommy is slowly becoming a climber. He climbs up the regular stairs independently and can almost climb down the stairs independently. (He’s been navigating the shallow sunken living room steps by himself for a couple of months already.) We still have baby gates up and monitor Tommy on the stairs. But he’s very confident in his stair climbing ability. Tommy can climb down from although not up on most furniture by himself (yet). 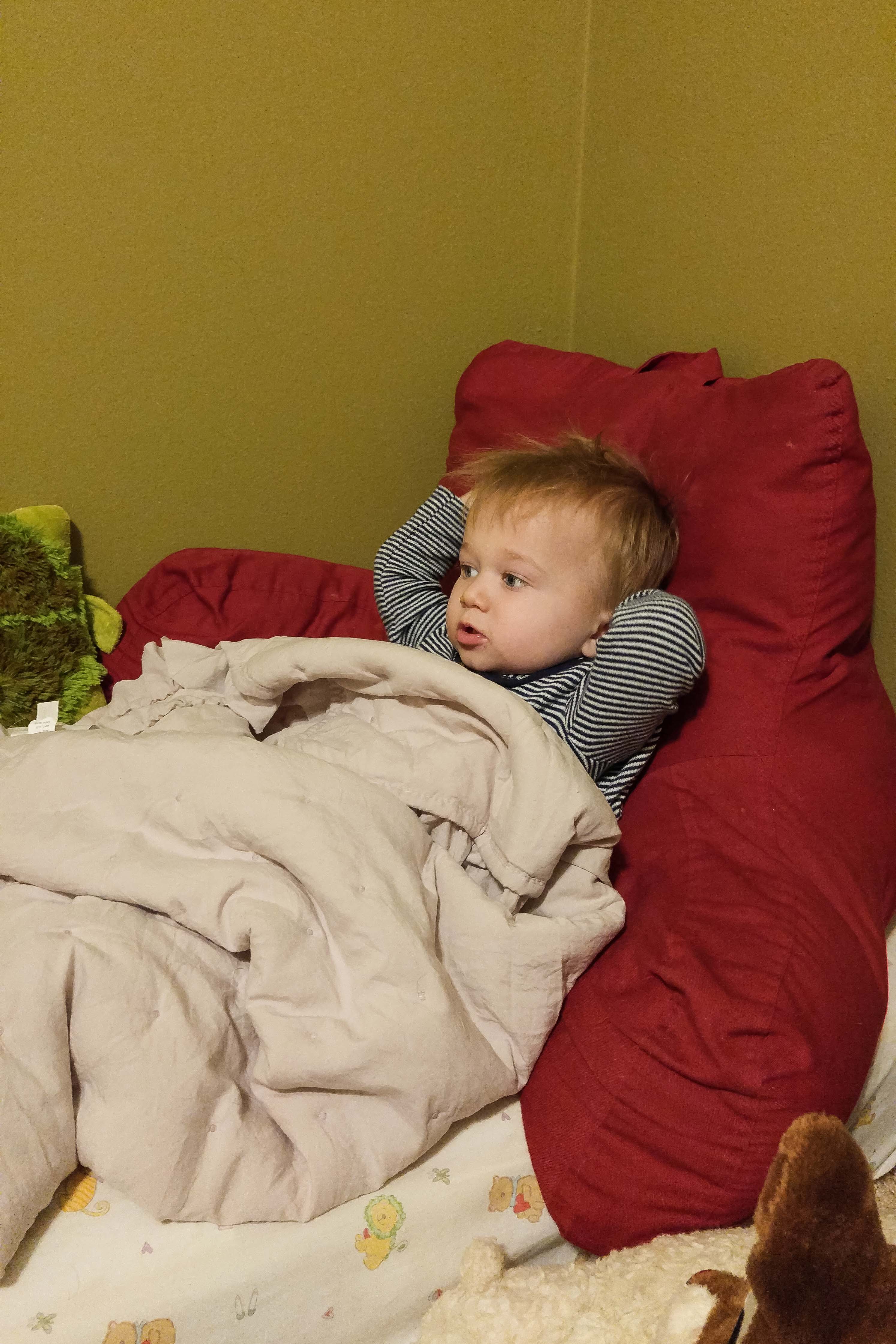 Tommy loves his teeth and talking about his teeth. He says “teeth” and points to them at least once an hour every single day (more so earlier in the month than later in the month). He can also identify his nose, hair, and belly button. We’re still working on ears, eyes, and other body parts. Tommy also loves brushing his teeth and looks forward to brushing (and playing in the sink) every night.

After months of morning baths because Tommy really didn’t like to have them at night, we finally switched to nighttime baths sometime around 16 or 17 months. Now he LOVES night baths and gets very excited when we mention bath (to the point where we don’t until it’s time to take a bath). Tommy has always been comfortable in the bath, but swimming regularly has made him even more comfortable with it. He doesn’t mind getting his hair washed nearly as much and loves splashing/making waves. He’s getting more comfortable putting his face and ears in the water in both the bath and pool. 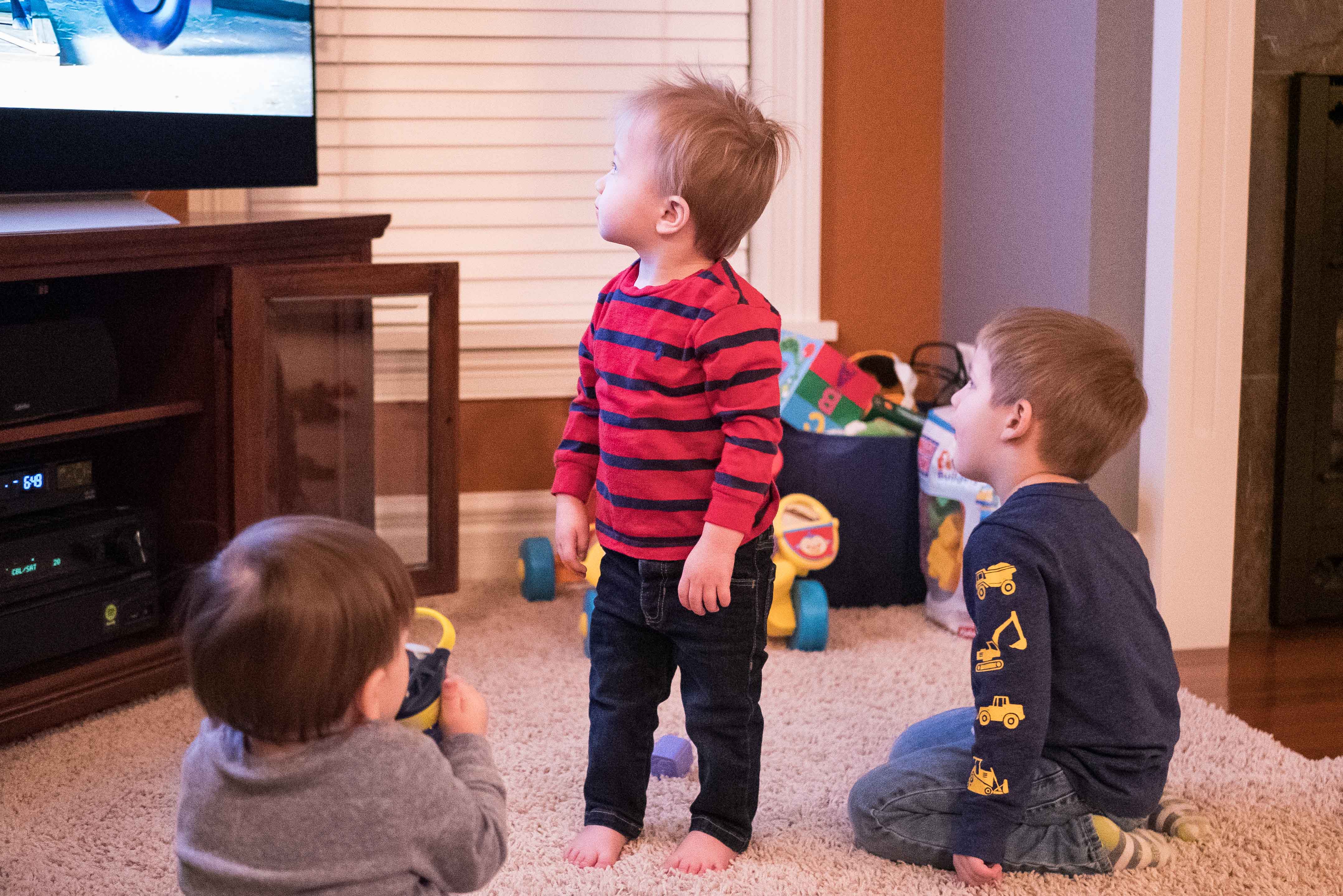 A lot of people ask what TV shows Tommy likes to watch. At most, we watch an hour a day, usually split up into two half-hour segments, usually one of which is often with Jake in the evenings. We often watch something like a food documentary or house hunting show. As far as kids shows goes, we’ve slowly been making our way through a lot of the Amazon Prime originals, like the Car City shows. I really like the Netflix adaptation of If You Give a Mouse a Cookie, too. Jake and Tommy have watched How to Train Your Dragon, which Tommy really loves. Finally, this past month, we’ve just started watching Daniel Tiger. I have no idea how I made it to 2019 without watching Daniel Tiger. But I can see why so many people really like it.

Tommy’s newest favorite food is Plum Organics Teensy Fruits baby fruit snacks. I picked them up on a whim because Tommy always wants fruit snacks when Jake eats them, and he’s not quite ready for regular fruit snacks. He LOVES the Plum Organics fruit snacks, though. Tommy has a handful of snacks at his reach in the kitchen that he can ask for as he likes. I keep the fruit snacks separate, as I think they would be all he’d eat for a lot of meals/snacks these days. 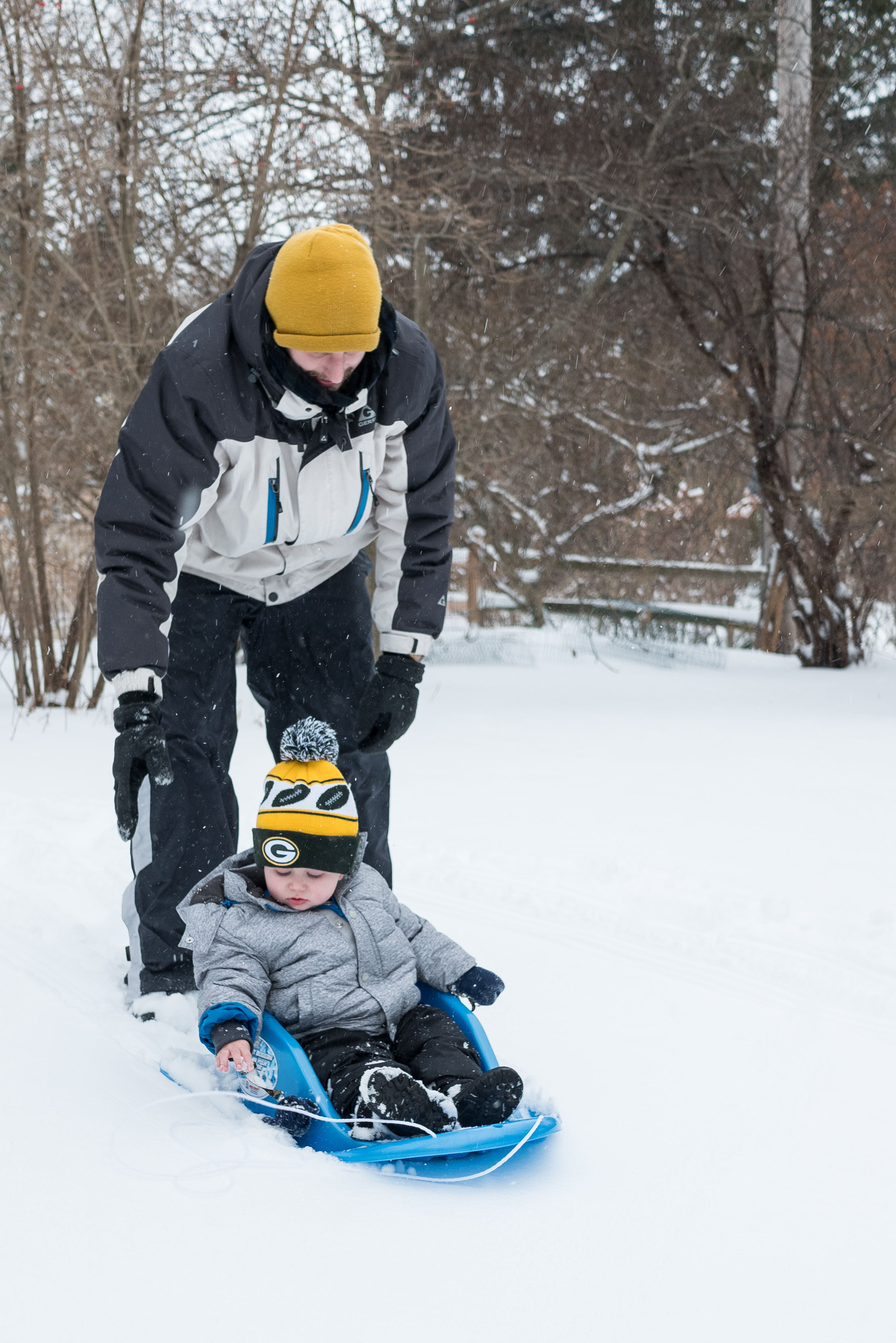 We got in a few snow excursions this past month. Unfortunately, some of the snowiest days were also the coldest, which made for some short outings. Tommy does pretty well wearing a hat. He has zero interest in wearing gloves, which makes it tough when it’s really cold. Then we had a period with so much snow (about two feet on the ground) and super cold temps (below 0) that we barely left the house, let alone got out in the snow. 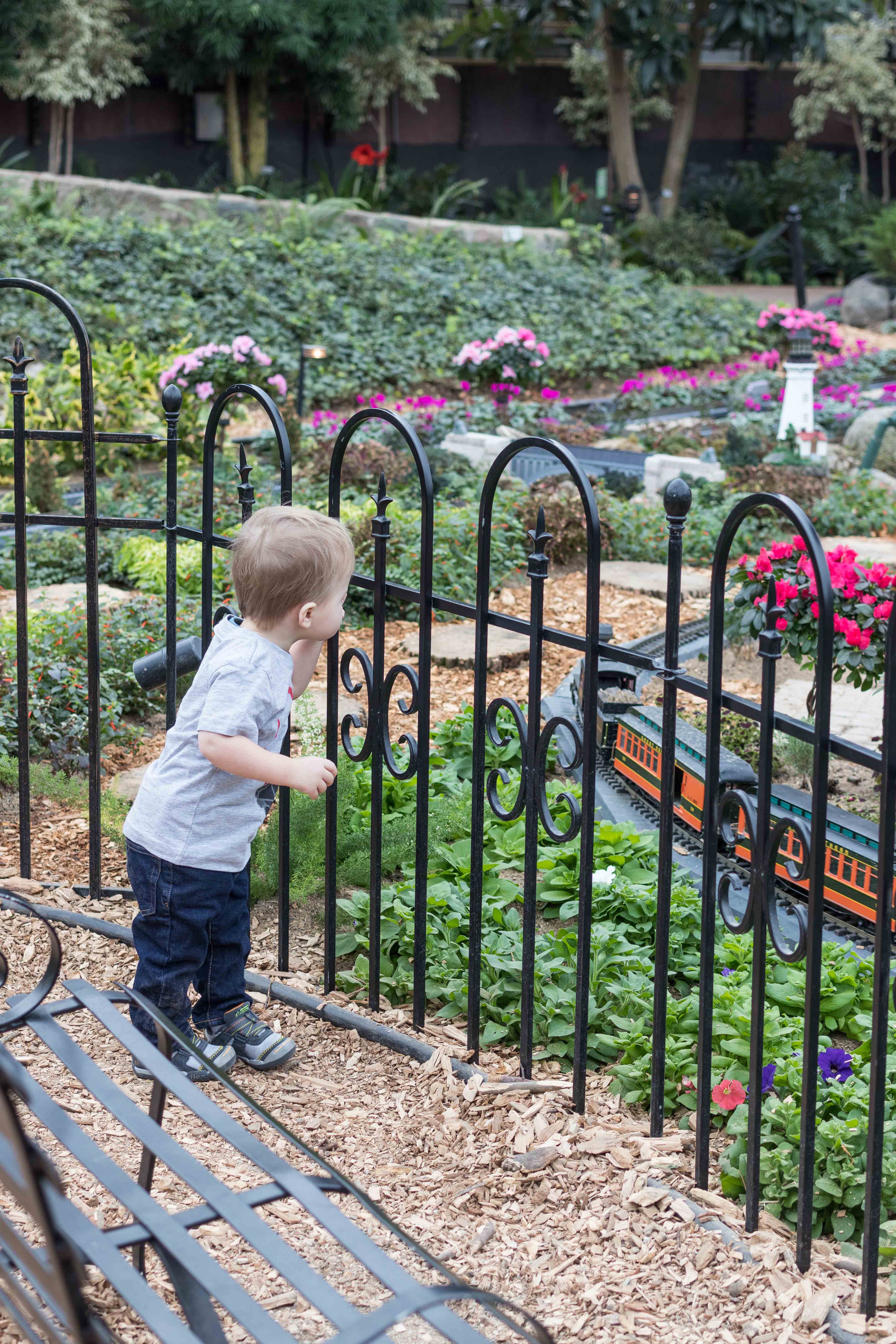 Tommy and I went to the Miniature Milwaukee garden train show at the Domes. I’ll be sharing more pictures from this excursion later in the month. 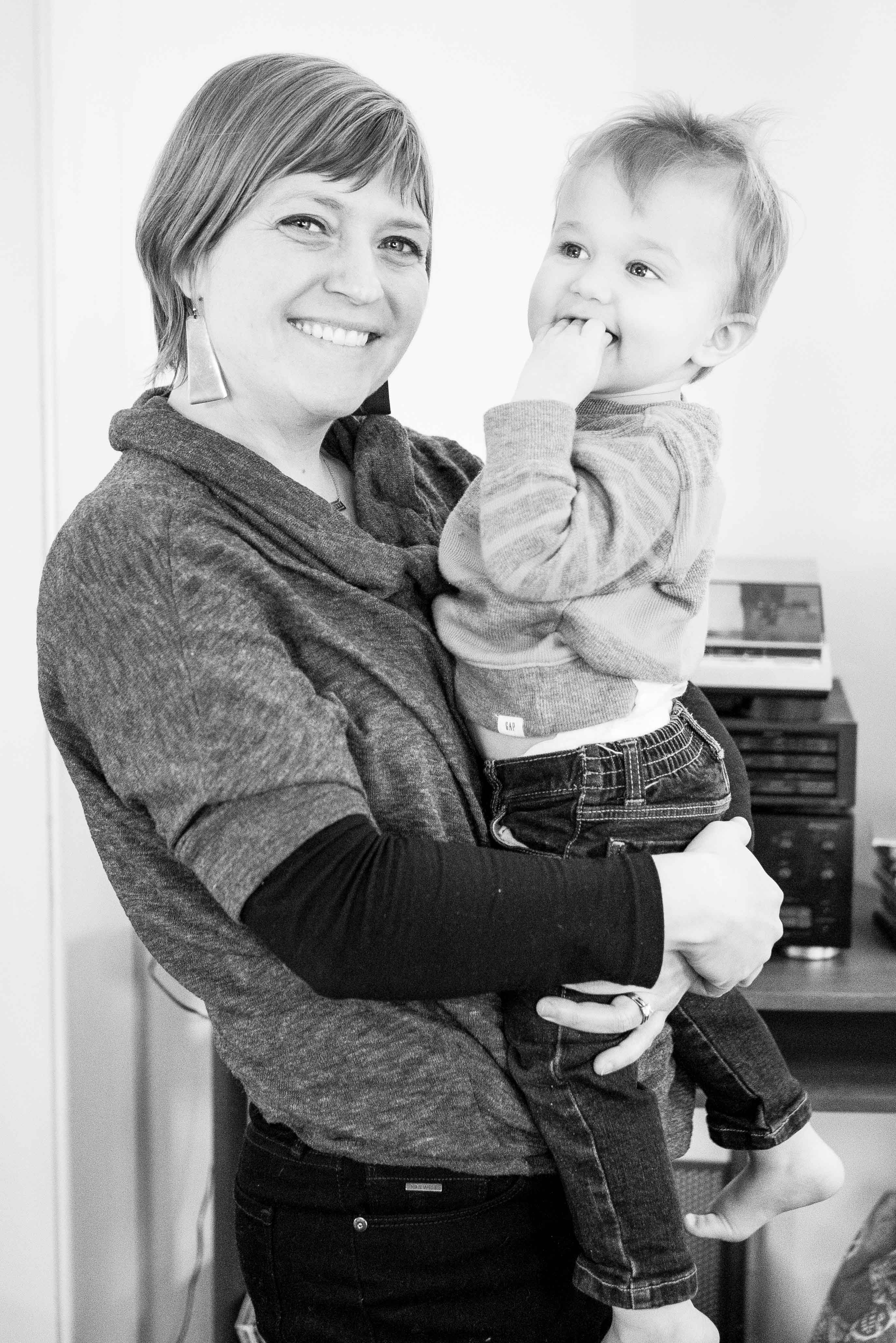 A few days before Tommy turned 19 months, we made a day trip to Chicago to visit my sister-in-law and mom. Many of you don’t know that at the beginning of 2019, my brother and his wife moved from Chicago to Paris. This month they’re back in the States for about 10 days for work commitments. I didn’t bring Tommy with me to Texas (see below). And I’ll have very few chances to see either my brother or sister-in-law this year. As such, I wanted to fit in a visit and get in some more family time for Tommy.

I spent my first couple of nights away from Tommy right at the 19-month mark. I made a quick trip down to Texas for a family gathering. It involved an indoor classical music concert and multiple long brunches/dinners at nice restaurants, which wouldn’t have made for a good trip for Tommy. He stayed behind with Jake. As Jake ended up having to provide some call coverage that weekend (not originally planned when I booked this trip), my in-laws helped watch him, which we really appreciated.