Waiting two months to write a first baby update is crazy because so much changes from week to week, sometimes even day to day, during the first two months of life. From day one, there is so much that I’ve wanted to write down, but I’ve also had no idea where to start. Plus, I’ve felt taking a lot of time out for writing is time that I’d rather be spending with Tommy and other family members, getting something done around the house, or let’s be honest, sleeping. So here we are two months in and I’m finally writing a post about our little guy. 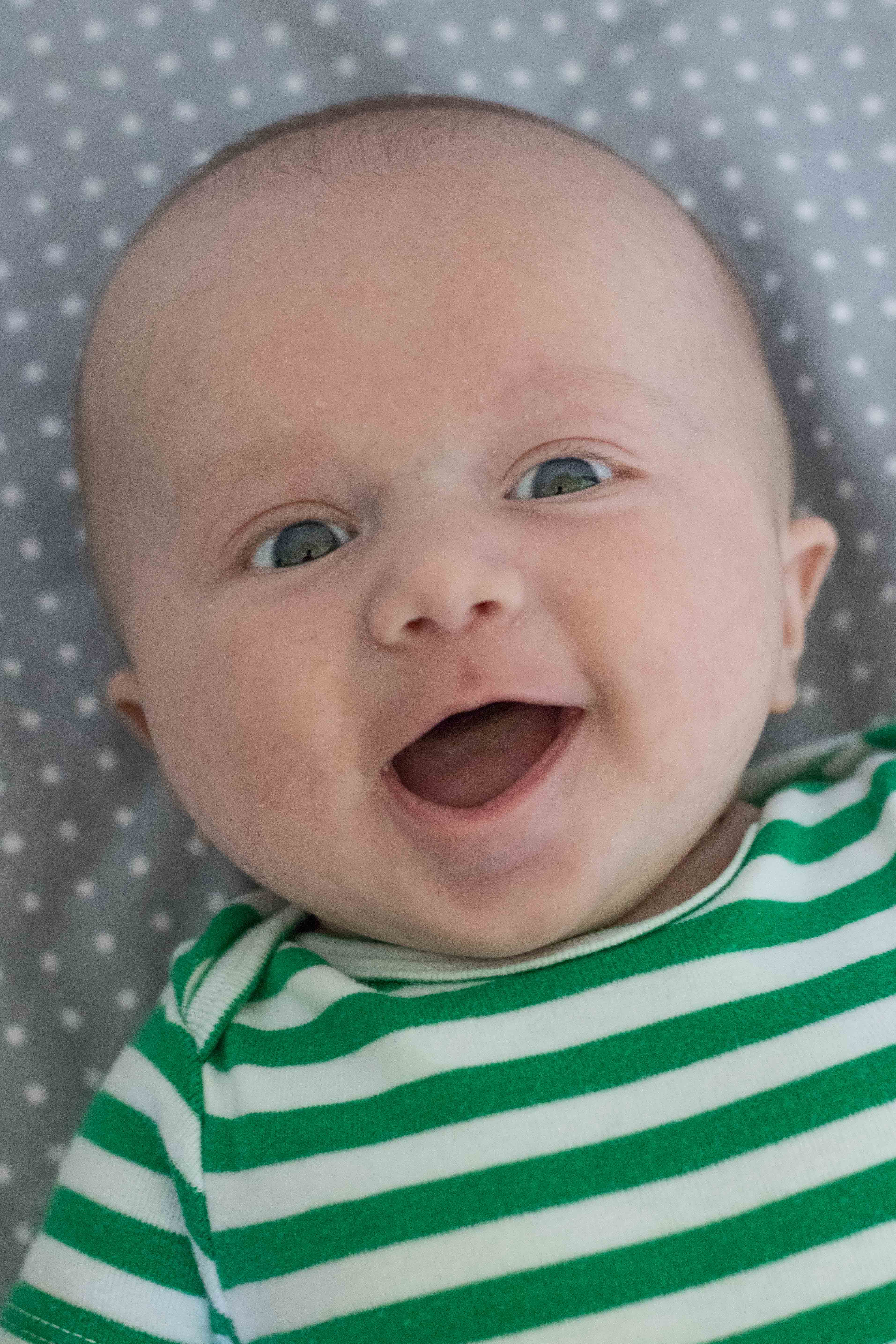 Tommy is two months old this week. He weighs 11 pounds 9.5 ounces and is 23 inches long, which puts him at about the 50th percentile for both height and weight.

Tommy is a super chill baby.  Right from the start, he’s only really fussed when he’s hungry or he needs his diaper changed. Sometimes he has a bit of an off day when he’s gassy or growing like crazy and is a little fussy. But even on those days, he’s just fussy. He doesn’t scream for hours on end. It took a little time for him to get used to diaper changes and baths. But he doesn’t mind diaper changes, especially once he realizes how good the new diaper will feel. And he likes baths, which is a lot of fun. He doesn’t like getting his nails clipped but has no other strong dislikes. He enjoys high ceilings and lights and is always curious about his surroundings when he’s in a new location.

Tommy is not very picky. He has yet to get really upset about a certain baby bottle, formula, outfit, etc. He’s let anyone hold him, right from the hospital up until the two-month mark. I know there will be a stage where he only wants Mom and won’t have any of this being passed around business. But it’s been great thus far, especially when other people are around, and I can hand him off to eat or just go to the bathroom without him screaming bloody murder.

Since very early in life, Tommy has had his days and nights figured out. He sleeps his longest stretches at night, usually going down around 9:30/10:00 and waking up 2-3 times (at 2 months, 1-2 times) before 7:30/8:00. If we don’t have to go anywhere early in the morning, he’ll often go back to sleep until 9:00/9:30. He’ll occasionally sleep longer stretches during the day but usually takes a couple of 20-30 minute naps with maybe one hour nap.

Tommy is more and more alert and responsive every week. While he doesn’t do true social smiles yet, his smiles have definitely been more than just gas since about the 5-6 week mark. He recognizes both my and Jake’s voice and often responds to funny behavior interactions, such as nose touches and kisses. Lately, he’s been testing out his voice all the time, which is sort of my favorite thing ever.

Currently, Tommy is wearing newborn pants and 0-3 or 3 month (depending on the brand) onesies and pajamas. He is a summer boy at heart and doesn’t like having his feet covered. I didn’t put him in socks until after Labor Day. Tommy wore newborn diapers until he was about five weeks old. He’s in size 1 diapers now but won’t be for much longer.

Tommy eats 2.5-4 ounces of formula at a time. Generally, he eats the largest quantities during the night or first thing in the morning following long stretches of sleep. He prefers to graze during the day, eating 2.5-3 ounces at a time every 2-3 hours.

I’m constantly surprised both by how little and how much babies can do. How can a days old infant who can’t see more than a food in front of his face have such distinct, clear facial expressions? Before having my own child, I’d spent very little time around newborn babies. At least once a day during the first few weeks of life with Tommy, I would do a Google search that started “how/why do newborn babies [fill in the blank]?” Nine times out of 10, the answer surprised me. I’m sure that this will continue to be true through Tommy’s entire first year of life.

More than anything, I’m trying to embrace this stage of life and enjoy everything about having a new baby. I’m so excited for so many aspects of Tommy’s future. It’s easy to get caught up in the things he can’t do instead of appreciating the things he can do or just where we’d at in life. For example, once he starts walking, it’ll be years before I can cook dinner uninterrupted without adult assistance. I’m fully enjoying the fact that I can put him in his bouncy seat and have him not go anywhere while I’m cooking.

I was going to include a few of the questions I’ve answered the most frequently over the last couple of months. But I decided to write a separate post with my questions, so stay tuned for that tomorrow.

I’ll be writing periodic updates about life with Tommy. I’m also planning to write periodic posts with baby favorites, which will include the items I’m loving for myself during this stage of life. I’m planning to publish the first baby favorites post within the next week or so.

4 thoughts on “Two Months of Tommy”