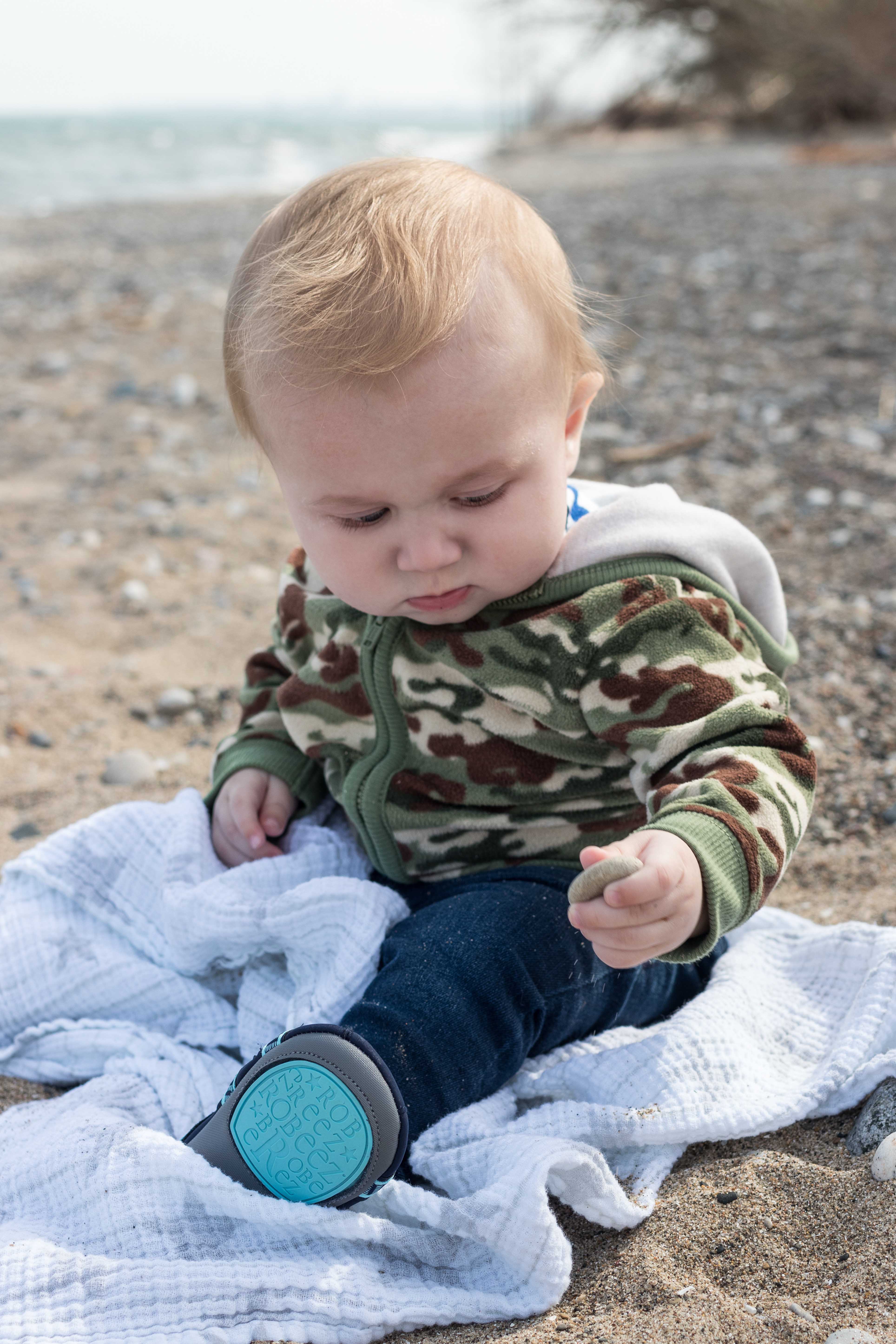 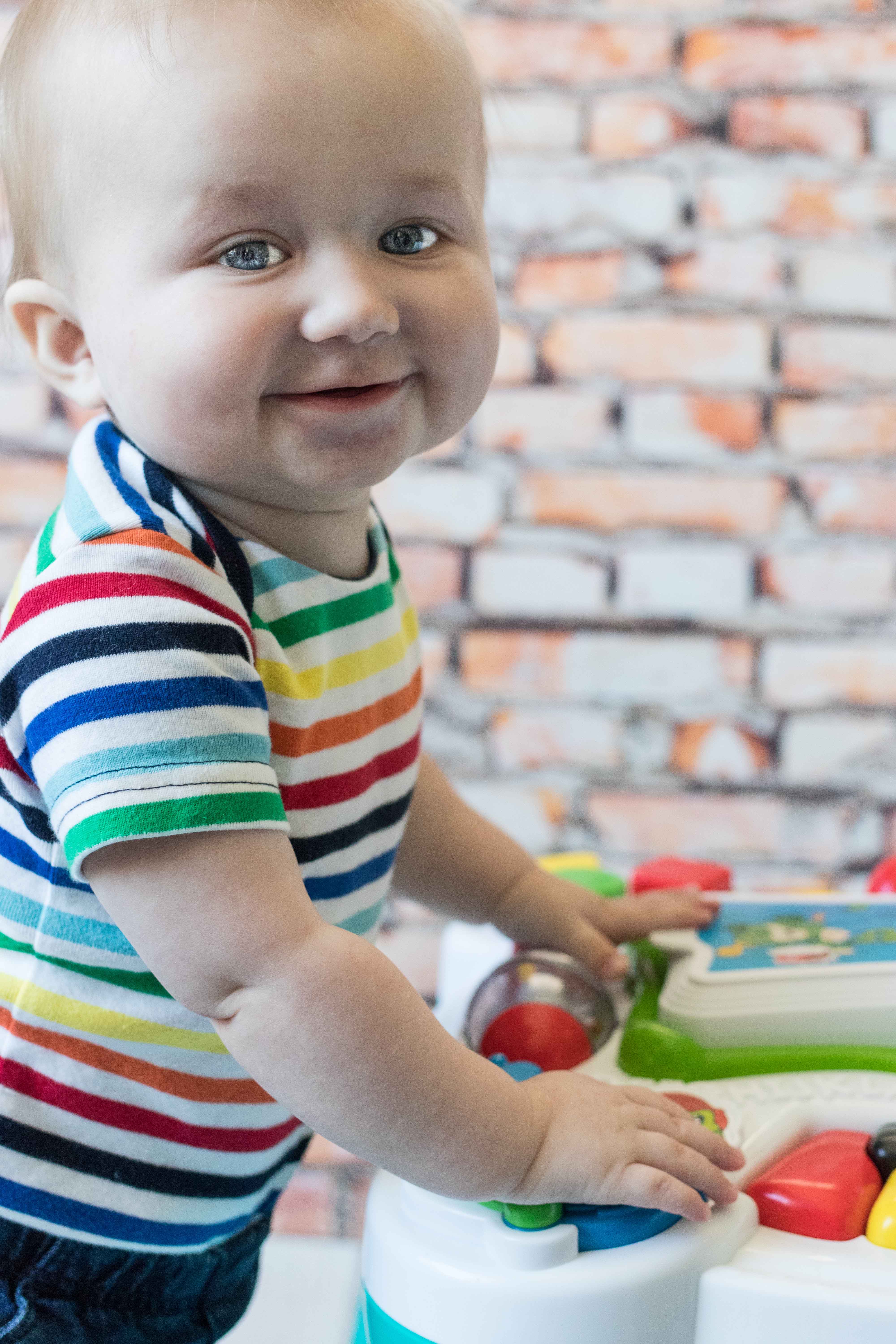 The biggest developmental change we’ve seen in the past month is the amount of time Tommy can stand unassisted. At nine months, he could only stand for a few seconds at a time. At 10 months, he stands for 10 minutes at a time, if not longer. We bought him a LeapFrog musical table to help him keep working on his standing skills, which he loves. He is so close to crawling but just not quite there yet. Every once in a while, he does seem to make a couple of real crawling motions. Usually he thinks really hard about it and then rolls where he wants to go.

Tommy is doing a great job imitating sounds and movements (i.e. clapping, drumming) and matching pitches. While he is a long way away from talking, he does understand quite a bit of what we say to him, such as telling him yes or no or to be careful. He also understands a lot from the inflection in our voices. While he may not know exactly what we’re saying, he does understand if we’re happy, excited, being silly, etc. 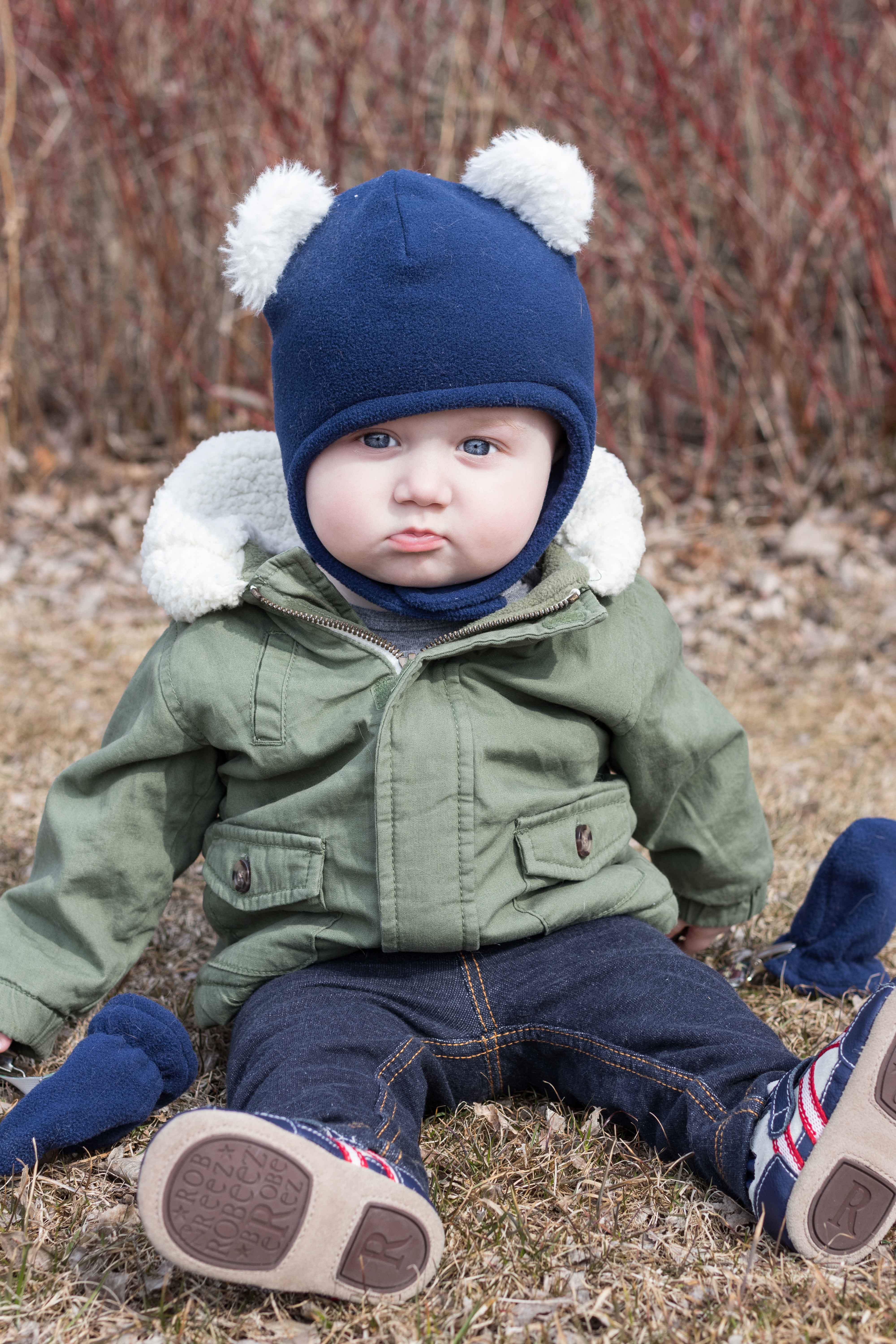 Otherwise, Tommy’s been building on his skills from the past few months. He talks all the time, making lots of B, D, M, N, and W sounds (including saying “dada” and “mama” all the time) and makes lots of clicking sounds, roaring noises, and raspberry/blowing bubbles noises. He’ll say “ba” or “da” repeatedly in rhythm, often while clapping along. He doesn’t wave hi and bye consistently but does wave deliberately sometimes when people are coming or going. He also loves waving at pictures and videos of people, including himself.

Tommy does a wonderful job playing with toys and looking at books independently. In the right mood, he’ll entertain himself for 15-20 minutes at a time. Among other toys, he loves percussion instruments, stuffed animals, his Fisher Price Noah’s Ark animals and farm animals, and anything that makes noise. He’s also really into paper and loves wrapping paper, tissue paper, magazine cards, junk mail, etc. When he’s playing with other people, he loves clapping/hand games, drumming games, physical manipulation games (Hickory Dickory Dock, playing airplane, etc.), and playing catch back and forth. 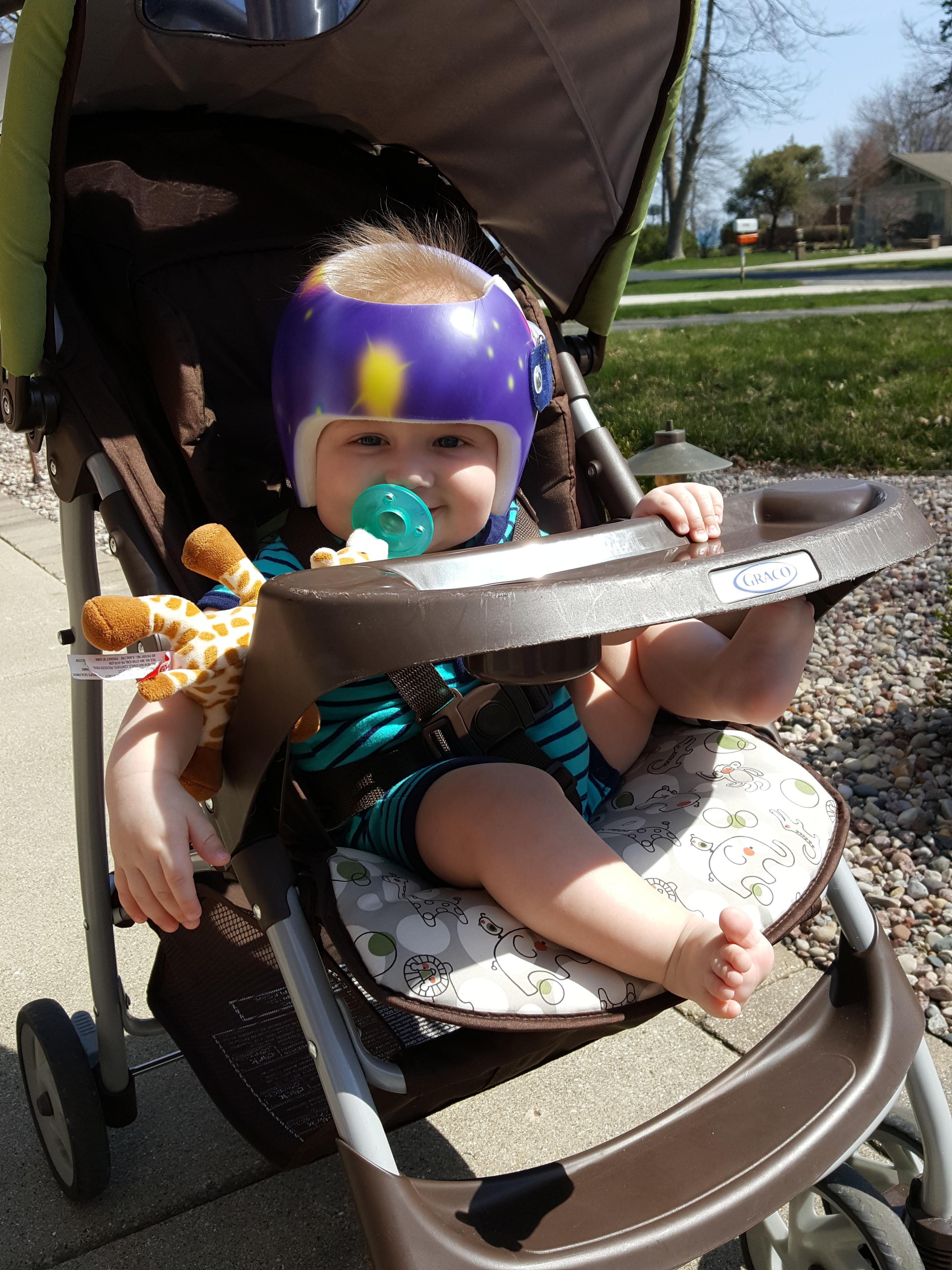 Tommy is very assertive when he does or doesn’t want something and isn’t afraid to tell you how he feels about it. There is a pretty high level of drama (crying, head down, etc.) when he doesn’t get what he wants. As always, with Tommy, most of the time he’s in a good mood, so rough moments tend to pass pretty quickly.

Now that the weather is getting nicer, we’re taking walks more regularly again. Tommy really enjoys walks, especially when it’s really warm and he can ride in his stroller with no socks or shoes. We also go to the neighborhood park regularly, where Tommy gets to swing in the bucket swings, which he loves. I’m usually done after about 10 minutes. I think that Tommy would happily go much longer. 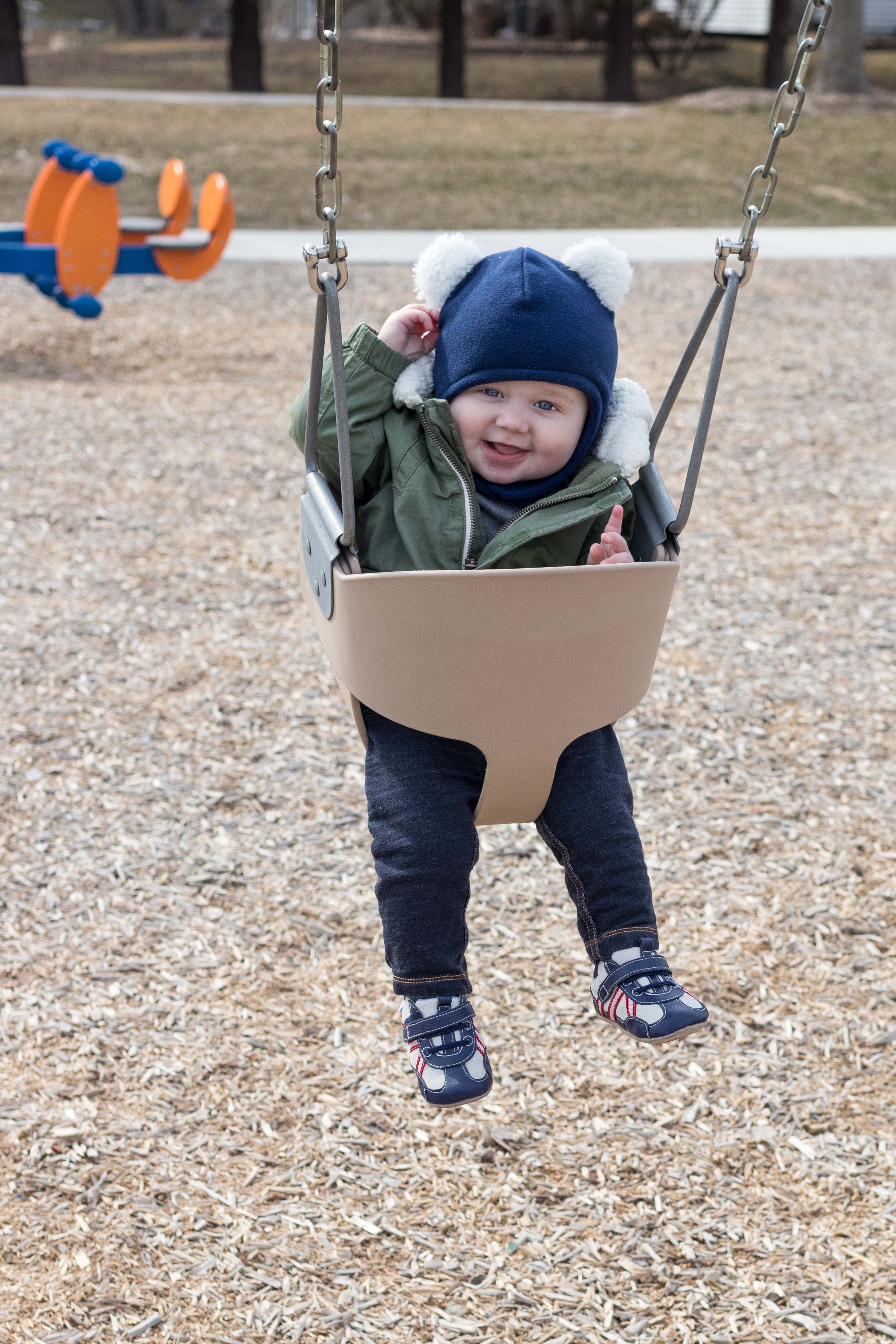 Tommy’s regular food eating has really taken off the past couple of month. He loves eating baby puffs and crackers (and will gum through even fairly hard crackers with no teeth) and will try just about any food we offer him. Currently, his favorite puff flavors are peach and sweet potato. Depending on the food, he may take up to 4-5 tastes of a single food before refusing more bites. He still gets most of his calorie intake from formula, taking four 7-ounce bottles per day, spaced 3-4 hours apart. For the record, he’s had the capacity to hold his own bottle for at least 2-3 months. But he still strongly prefers to lay down and have someone else hold the bottle for him.

Even when he’s not eating, Tommy does so well sitting in his high chair for long stretches of time, which is great when we’re eating or I’m working in the kitchen. When we’re with a group, he loves being at the table with everyone and constantly tries to get other people’s attention. One of his favorite things to do is tilt his head sideways until someone will tilt their head sideways back at him. As he is so mobile now, when we want him more contained, if he’s not in his high chair, he’s in his Baby Einstein, Exer-Saucer, or Pack ‘n Play. Similar to playing with toys on the floor, he’s often happy to stay contained and play for 15-20 minutes at a time. 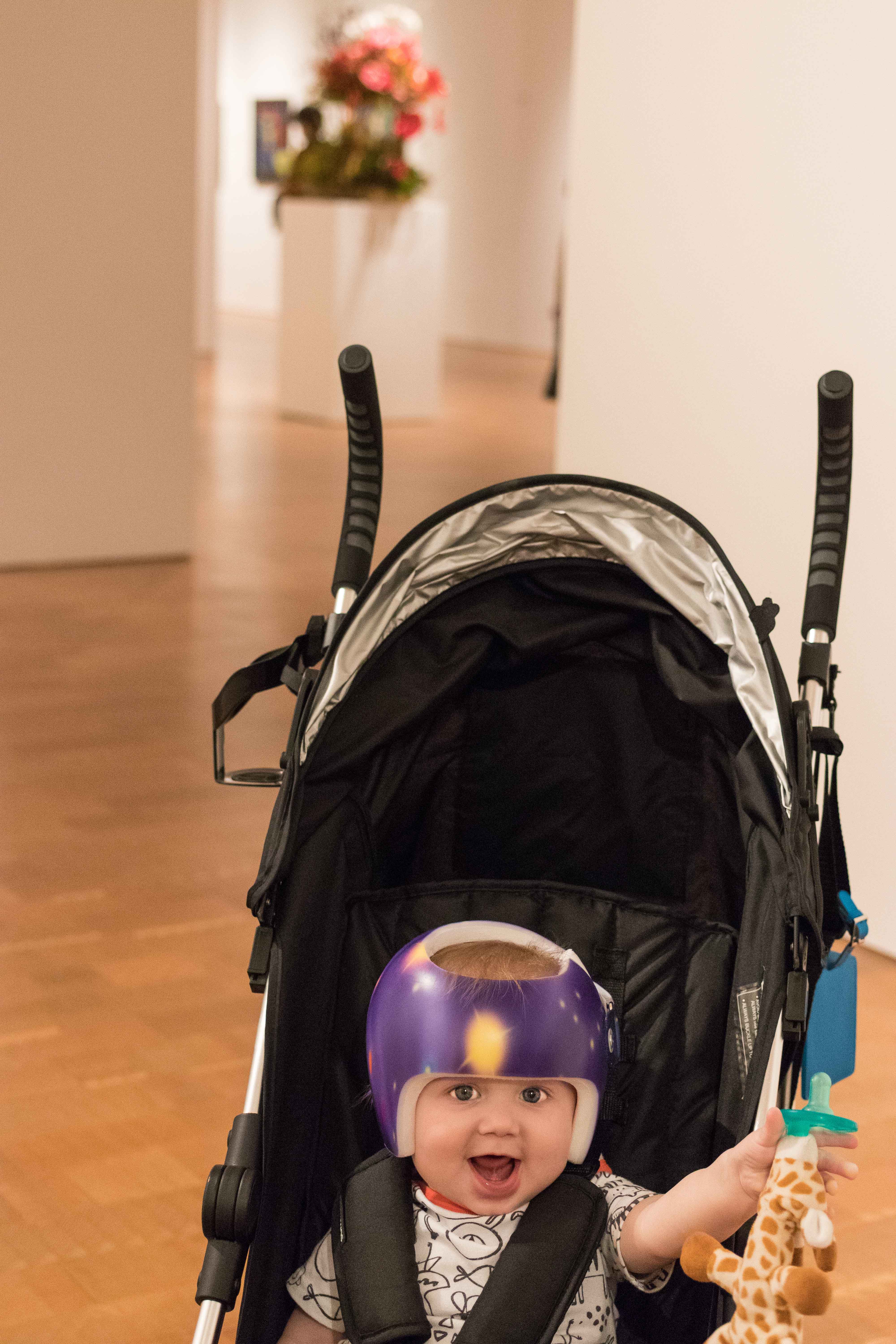 This past month, we went to Art in Bloom at the Milwaukee Art Museum (more pictures coming soon!). 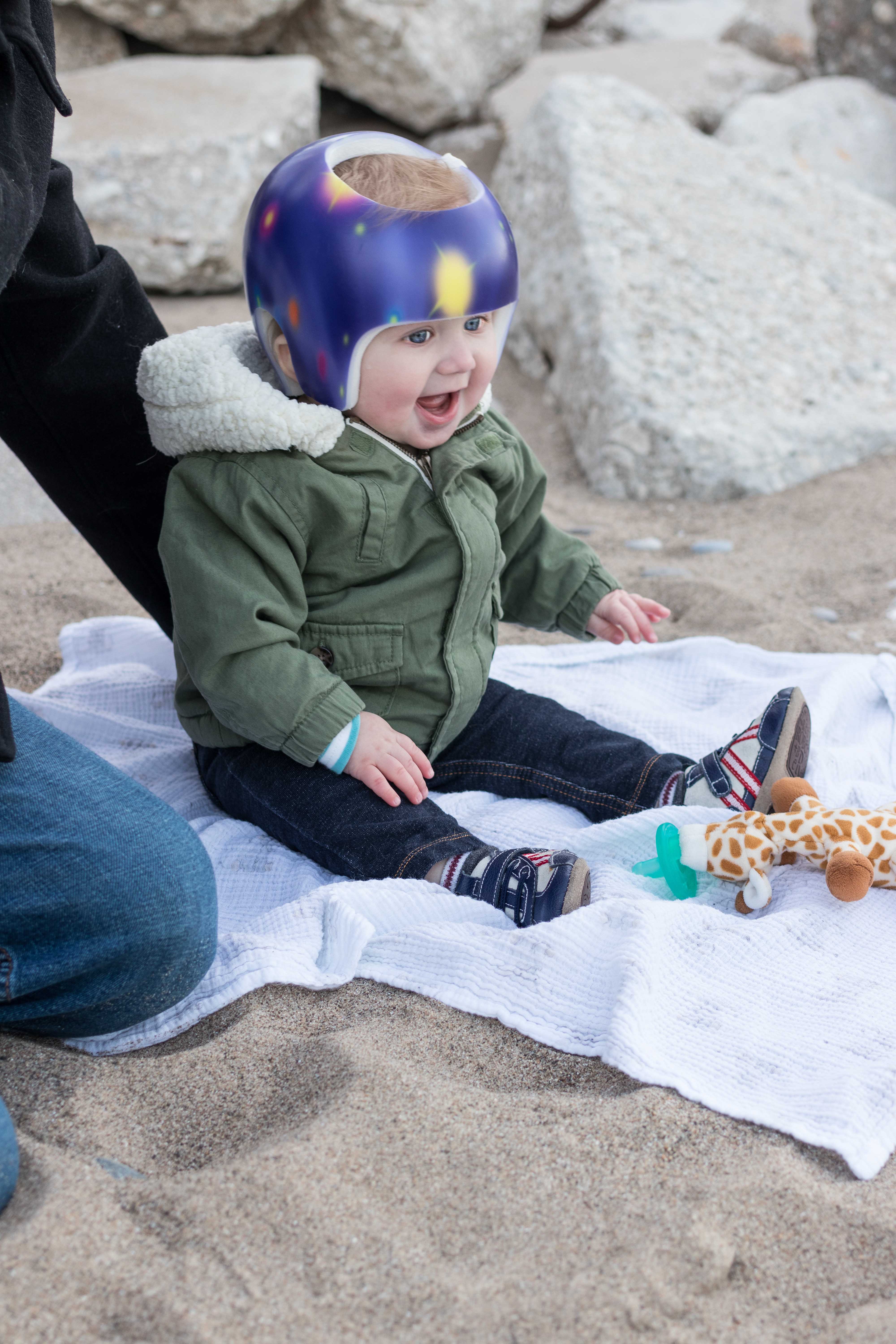 This past month, Tommy had his first real beach excursions. As we live half a block from the beach, he has certainly been to the beach before. The past month has been the first time at the beach that he was fully aware of his surroundings and got to sit on a blanket, watch the water, and play with the sand (which may or may not involve trying to eat the sand and rocks). As I’m sure you can tell from his expression in the above picture, he loved it. We’re looking forward to many more beach outings over the coming months. 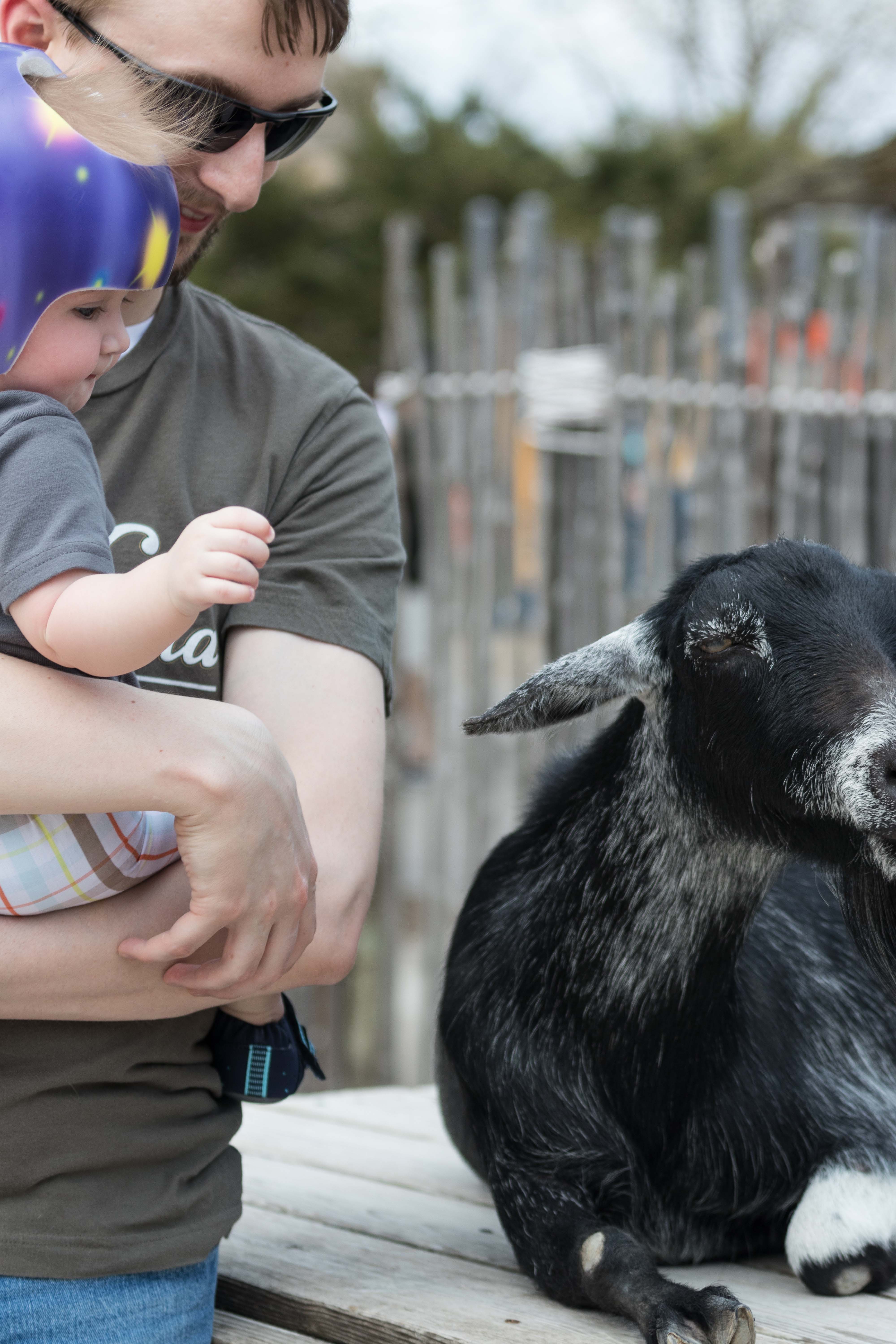 During the last month, we made what is sure to be the first of many 2018 trips to the Racine Zoo. Again, we have been to the Racine Zoo with Tommy but only last summer when he was tiny. Among other things, he got to pet the goats in the petting zoo.

Tommy is still rocking size 3 diapers and mostly wearing 9-month and 9-12 month clothing, with a few 6-month and 6-9 month pants in the mix. He continues to sleep 8-9 hours at night from 11:00/12:00-8:00/9:00, taking two 1-hour naps, one late morning/early afternoon and one late afternoon/early evening. Many days one of these naps is longer than an hour. Up until the past week, Tommy had pretty consistently been waking up at least 1-2 times per night. His helmet doesn’t help his sleeping, but he had been in this pattern before he got the helmet. The past week, he’s finally had a few full nights of sleeping straight through again. 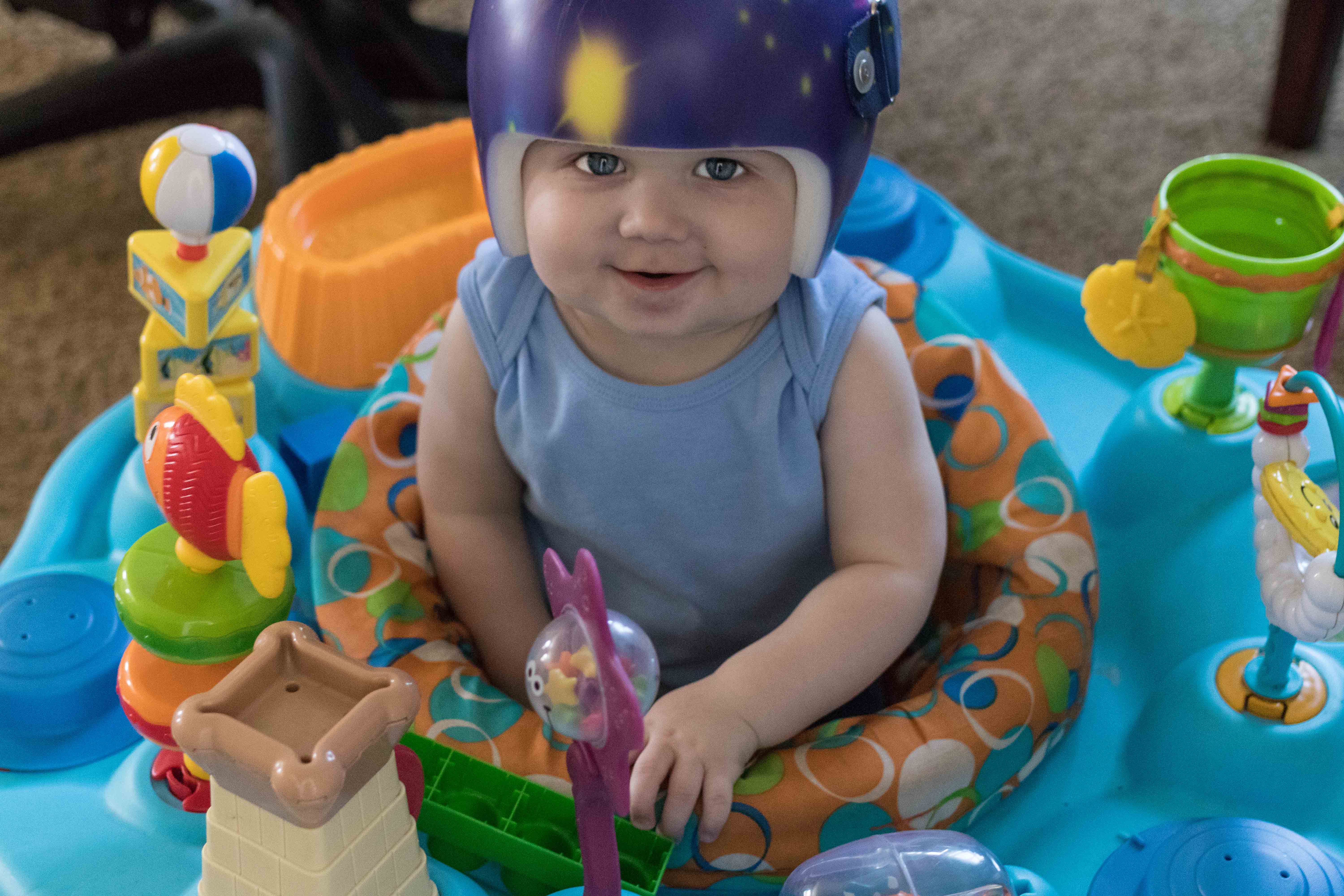 We had his two-month helmet check in early May, and everything looked great. The only measurement we don’t want to change is his head width, which is already right where it should be. The width has stayed the same, and across the board, his other measurements have improved. Honestly, we’re already very happy with the improvement we’ve seen. The orthotist is optimistic that we’ll keep seeing improvement and Tommy will be one deviation or right around the norm by his first birthday.