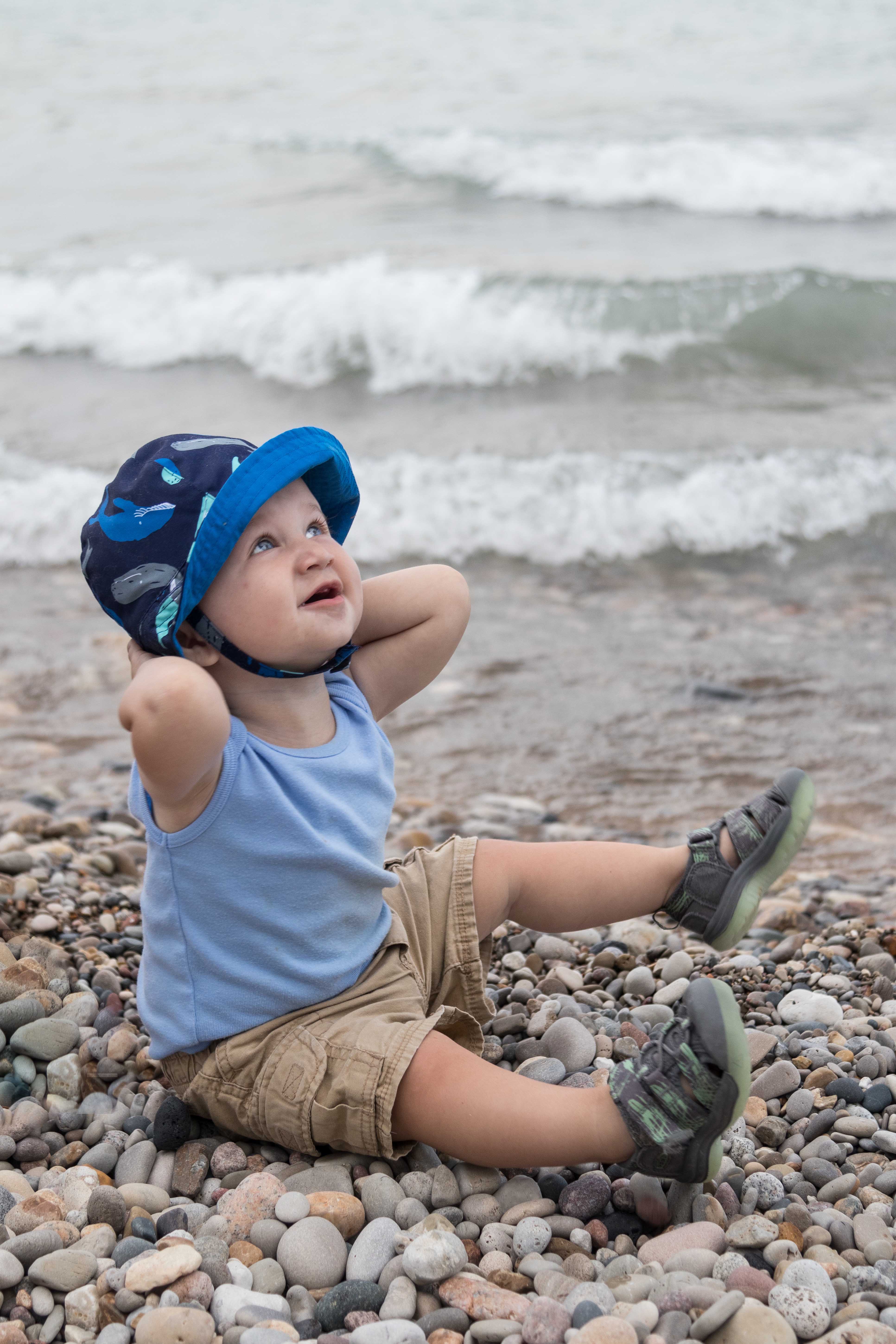 This past week, our Tommy turned 14 months old.

Tommy isn’t walking independently but is so close. Otherwise he’s fully mobile. He crawls like a champ, pulls himself up and cruises all over the house, and loves walking with his sit/stand walker and push bike. He’s started letting go and standing without holding on for a few seconds at a time and taking a few independent steps to get from one place to another. Tommy’s other exciting mobility development this past month is that he learned to climb stairs. He’s been climbing the two stairs up and down into our sunken living room for a few months. Now he’s mastered going up (nowhere close to going down) the main stairs. He went from going up one step to going up the entire staircase pretty much overnight. 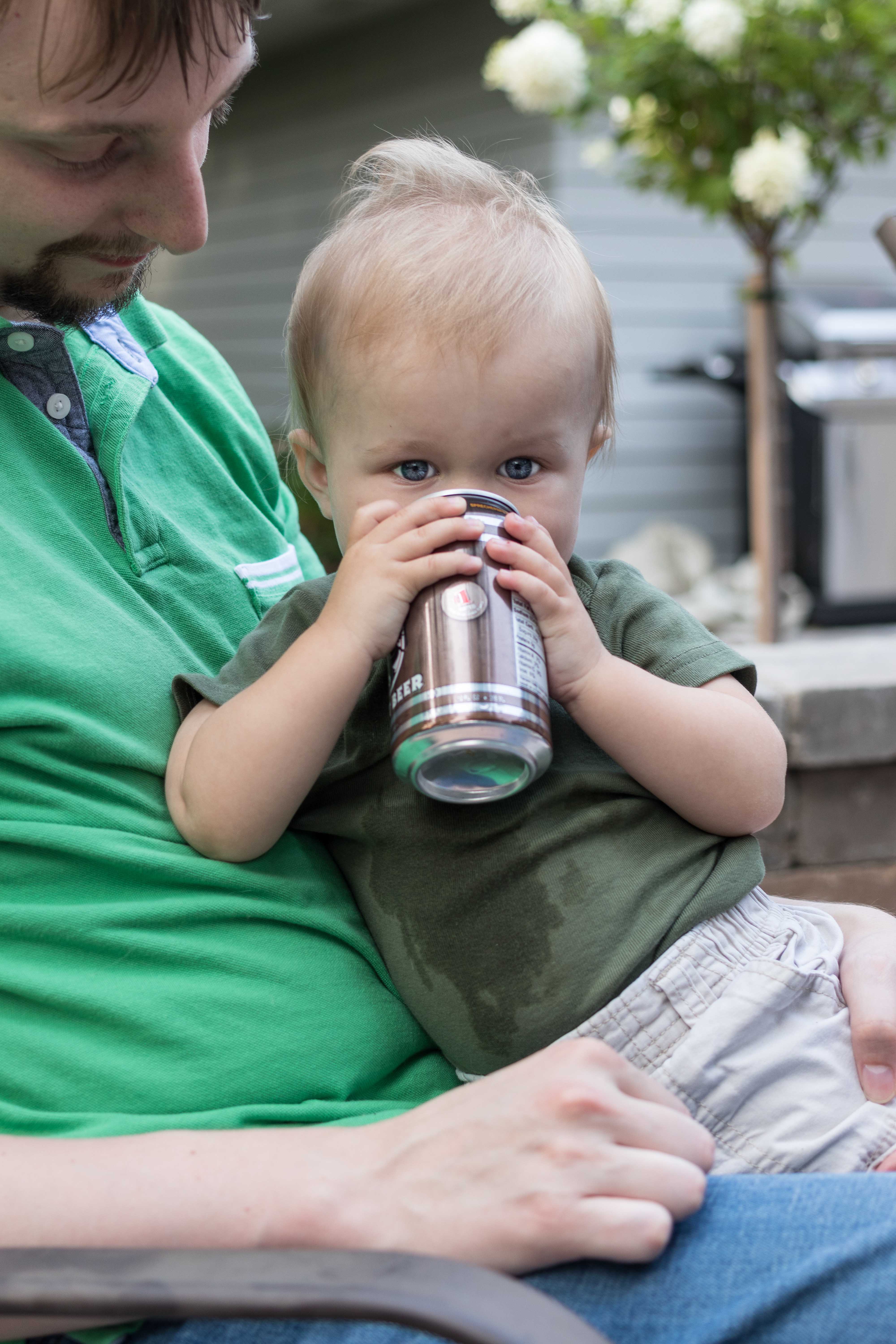 Tommy loves walking with the sit/stand walker and push bike all over the first floor of the house and out on the patio. When he cruises in the kitchen, he loves finding and playing with the spatulas, wooden spoons, and hand mixer attachments. Lately Tommy’s other favorite toy of choice is the light sabers that I got this summer for Jake’s birthday. More traditional baby toys that he’s enjoying right now include his Thomas trains, Little People zoo train and Noah’s ark, stacking cups, and anything that involves putting items into and out of a box, bucket, etc. He got a kiddie tent set with a connector crinkle tube for his birthday, which has been a huge hit with Tommy as well as the cats.

At 13 months, Tommy was just cutting his second tooth, his other bottom middle tooth. At 14 months, the two middle bottom teeth are fully in, and he’s primed to cut another bottom tooth any day. Tommy is also cutting THREE teeth on the top, the two middle top teeth and one of the teeth right next to them. Aside from one horrible weekend of bad diapers/stomach upset, which resulted in the worst sleep I’ve had since Tommy was born, teething hasn’t been too bad this month. 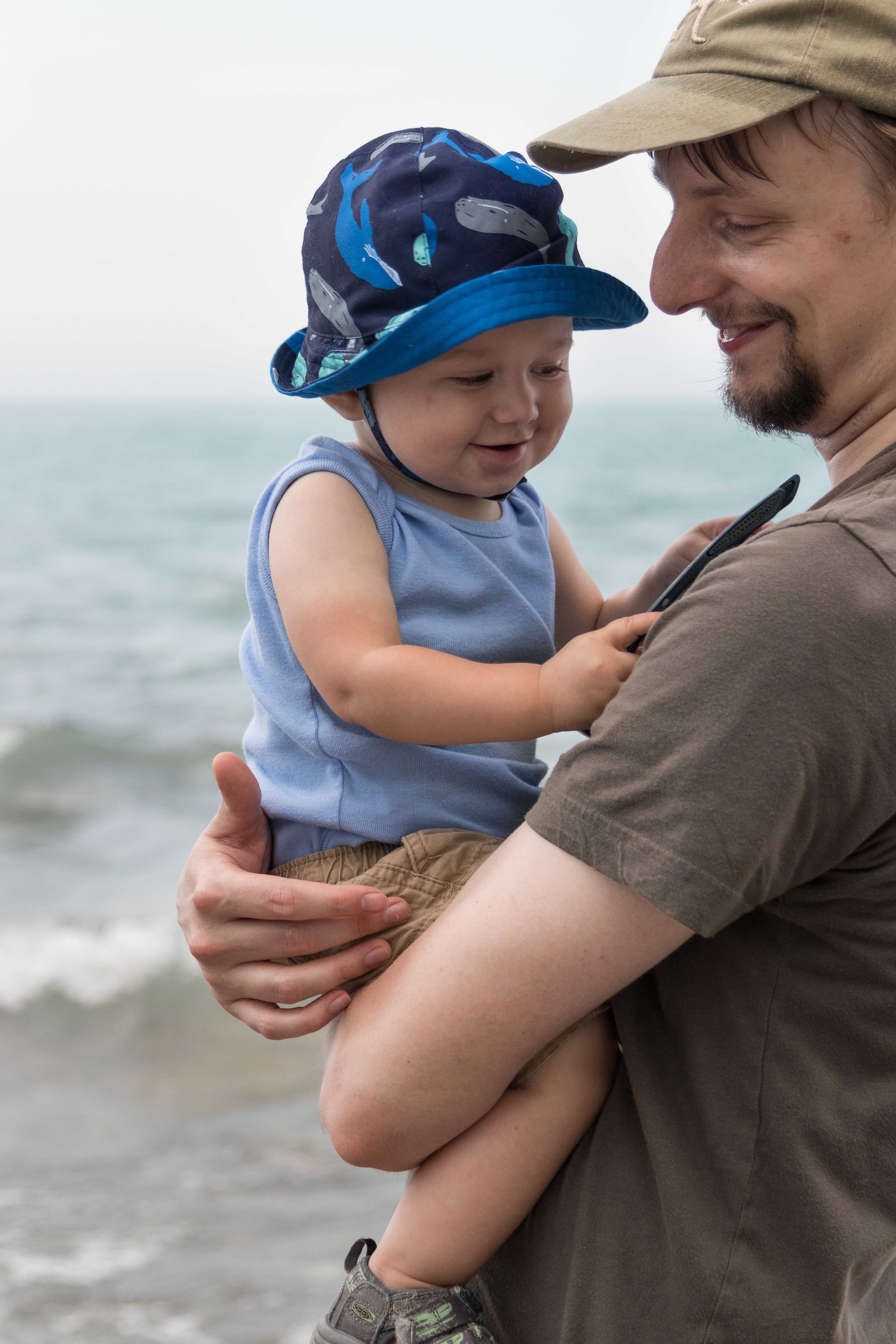 Most days, Tommy has three, sometimes four, whole milk bottles, totaling about 25-30 oz. of milk per day. Typically, he has one first thing in the morning along with a piece of buttered toast and a handful of fruit, either blueberries, grapes, or both. Sometimes he’ll have a second bottle before he goes down for his nap. Generally, he crashes around noon and doesn’t eat again until mid-afternoon. When he gets up from his nap, he gets a milk bottle and a snack, something like crackers and cheese or fruit and yogurt melts. Some days he’s really hungry and will snack in his high chair for 20-30 minutes. Other days he just wants a few bites and then he’s ready to play.

Depending on the timing of his nap, he has his third milk bottle either right before or sometime after dinner. He eats whatever we’re having for dinner or I heat up leftovers for him that I know he’ll like. In typical toddler form, sometimes he has zero interest in eating. But most nights he does well and will sit and eat for at least 15-20 minutes with us. His new favorite food this past month was “tandoori” chicken (Indian-inspired in the slow cooker). It was fairly spicy, which didn’t slow Tommy down at all. 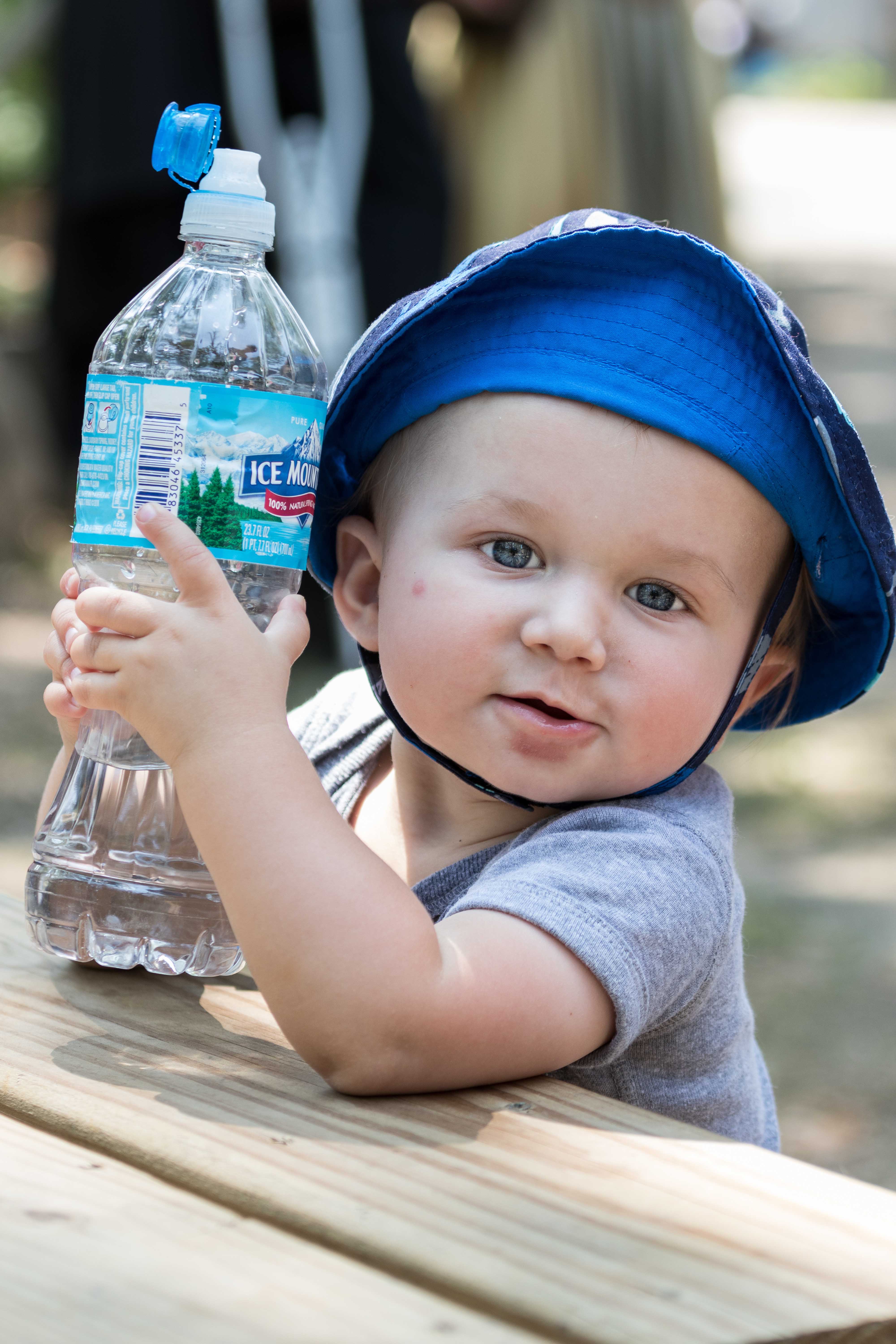 Tommy has done a great job learning the “all done” sign. He doesn’t sign “all done” as consistently as “more,” but he’s started signing it independently. He’s also throwing less food on the floor when he’s done eating (I shouldn’t say that too loudly). I think this next month we’ll start working on the sign for “please.” Tommy does a great job pointing at what he wants. Nine times out of ten, we know exactly what he wants. I’d like to start incorporating “please” into the communication before we hand him something. 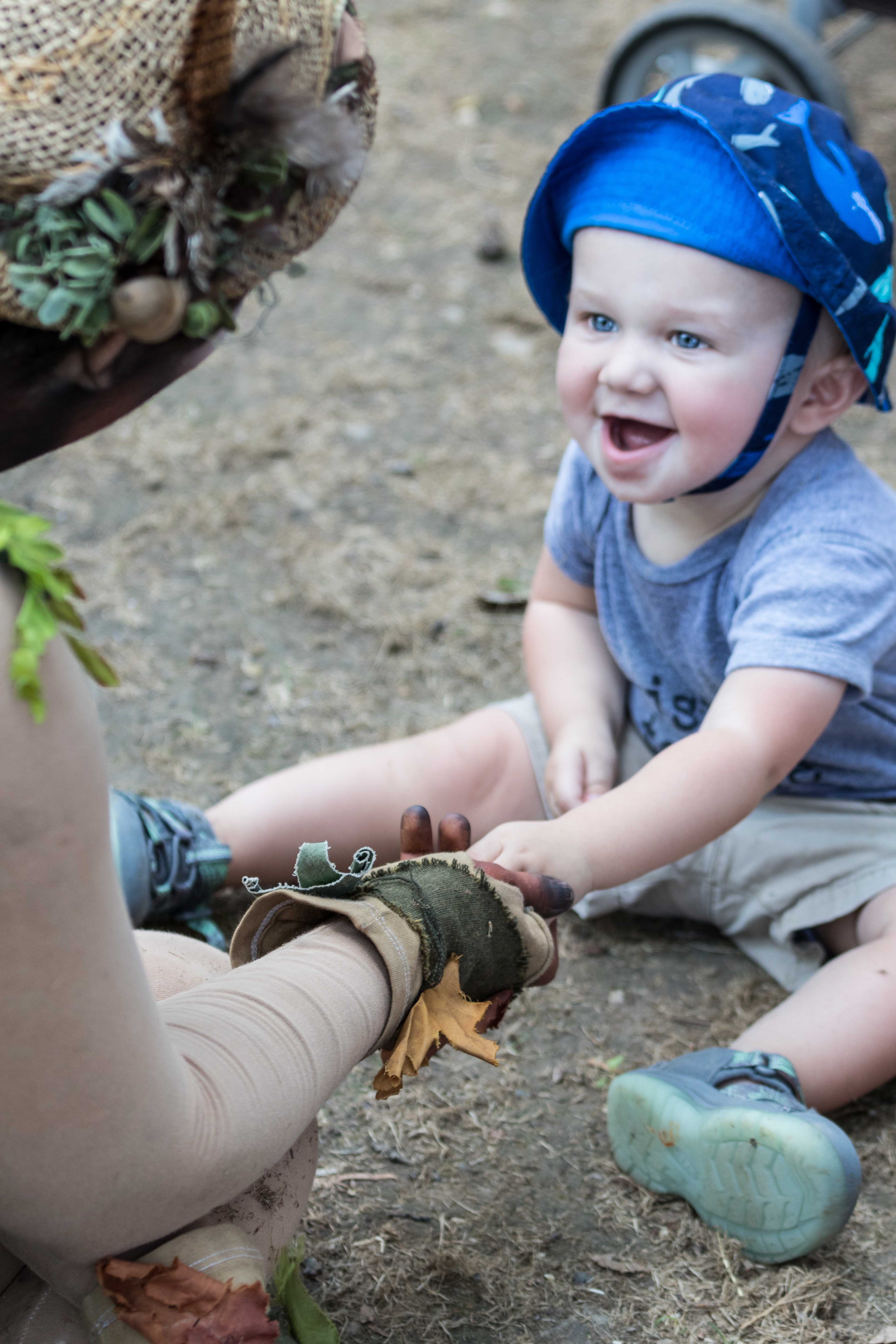 We kicked off month 14 with a trip to the Bristol Renaissance Faire. Last year Tommy was two weeks old when we went to the Renaissance Faire, and we left him with his grandparents. So this was Tommy’s first trip. He did a great job. Shockingly (not), Tommy loved interacting with so many people. He especially enjoyed his time with the fairies. He tried all of the food that we ate, including pork kabobs over rice and pretzel hot dogs. The food highlight was sampling frozen chocolate-covered cheesecake. Who can blame him, right? 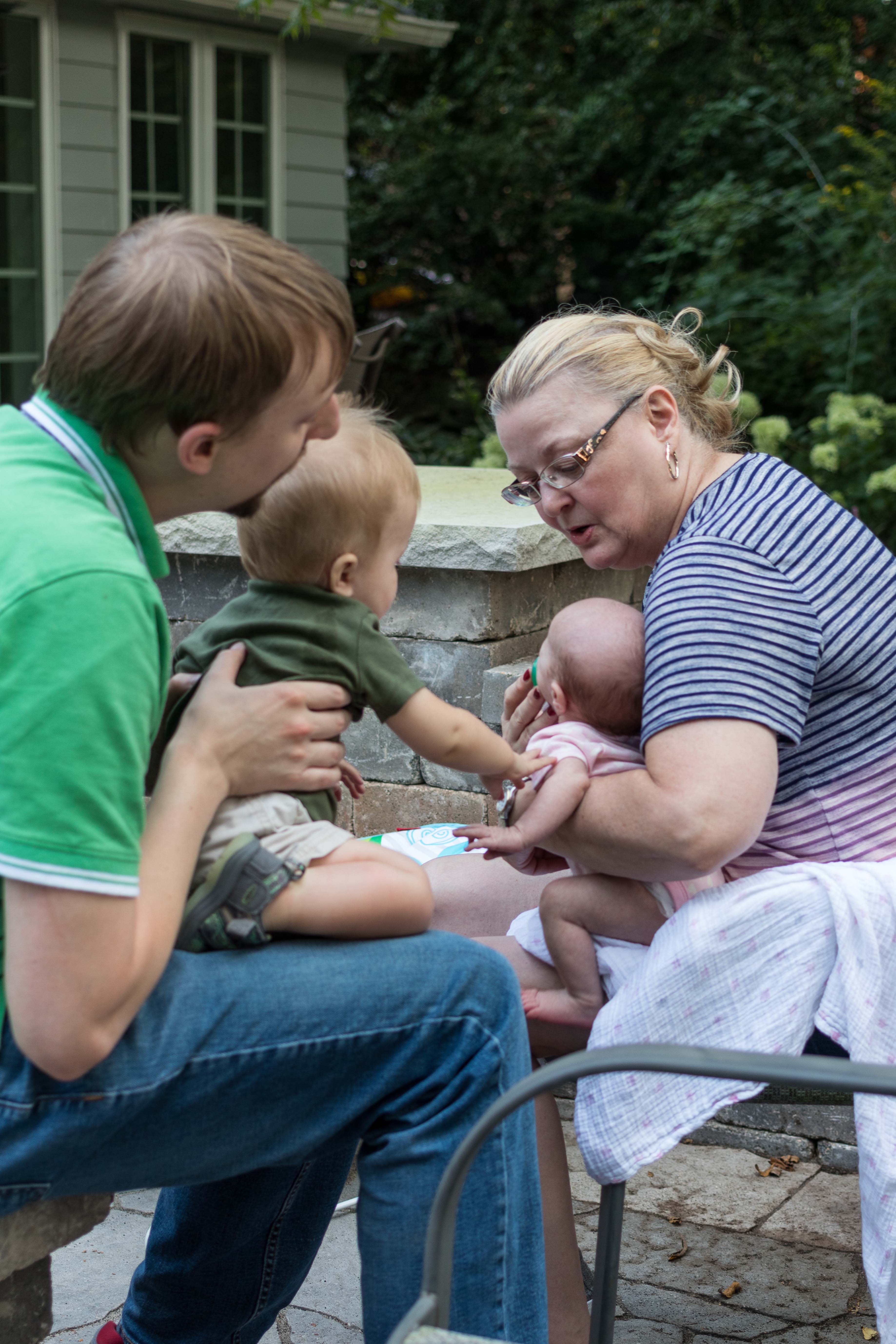 The weekend after Bristol, we visited some friends who have a two-and-a-half-year-old boy and an eight-month-old boy. The eight-month-old is almost as mobile as Tommy already, crawling everywhere and pulling himself up and cruising. The three boys had the best time together, playing and laughing together for almost four hours. Then the next day, Tommy’s cousin and her mom and Jake’s parents visited. This was the weekend of the horrible diapers/stomach upset/no sleep, and Tommy napped through most of the Sunday family visit. He woke up refreshed and feeling much better and still had a couple of hours to socialize. 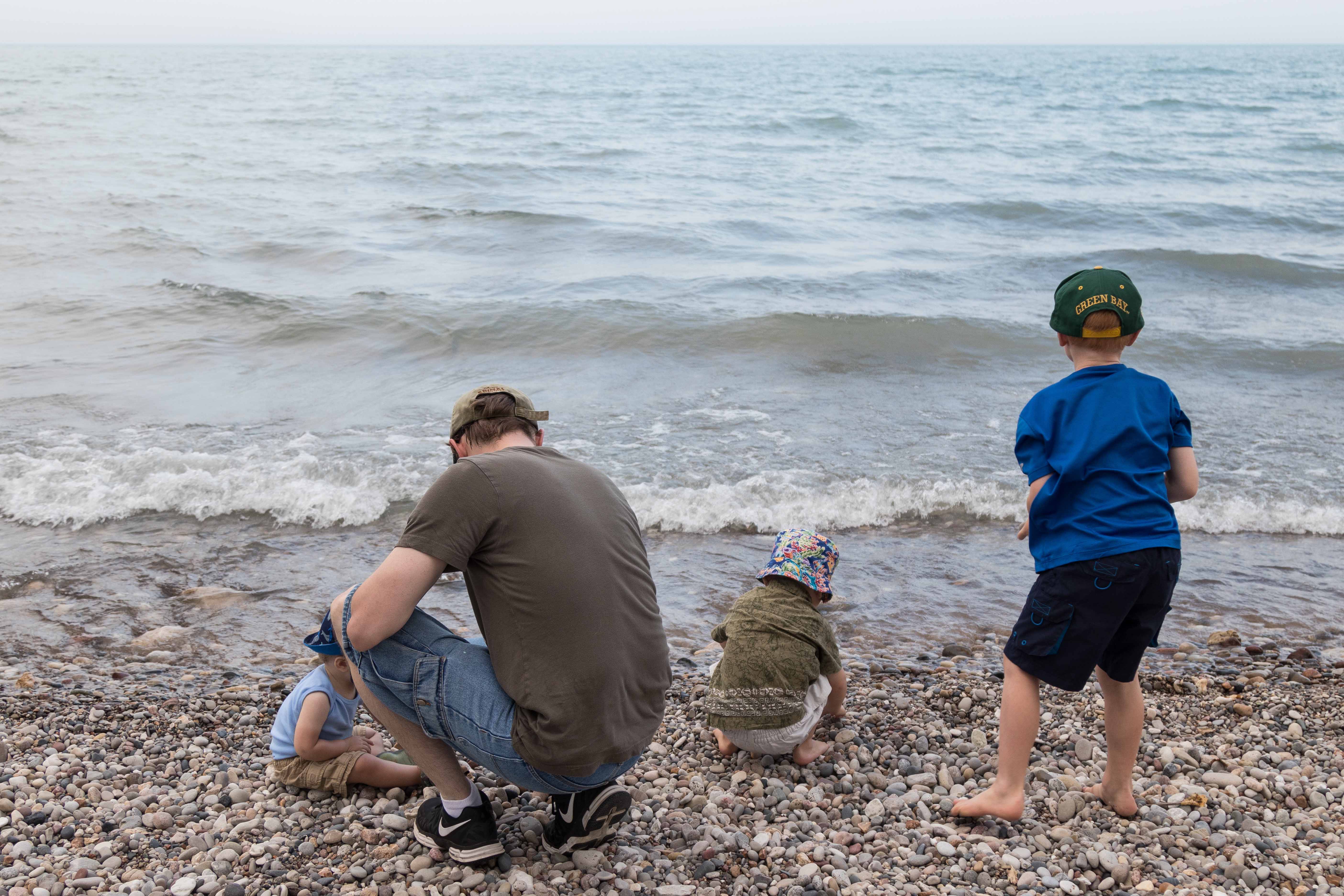 Toward the end of August, our friend Katie and her three boys visited. Jake and Katie’s husband completed their medical residencies in Milwaukee at the same time. After a three-year fellowship in Cincinnati, Katie and her family have settled in Madison. We’re so excited to have them closer again and look forward to more visits with them.

My parents and Tommy’s birth family both visited over Labor Day weekend. Tommy’s birth mom came with her mom and aunt as well as one of her brothers, whom we were meeting for the first time. We had beautiful weather and were able to spend time at our neighborhood beach access point and local playground during the visit. 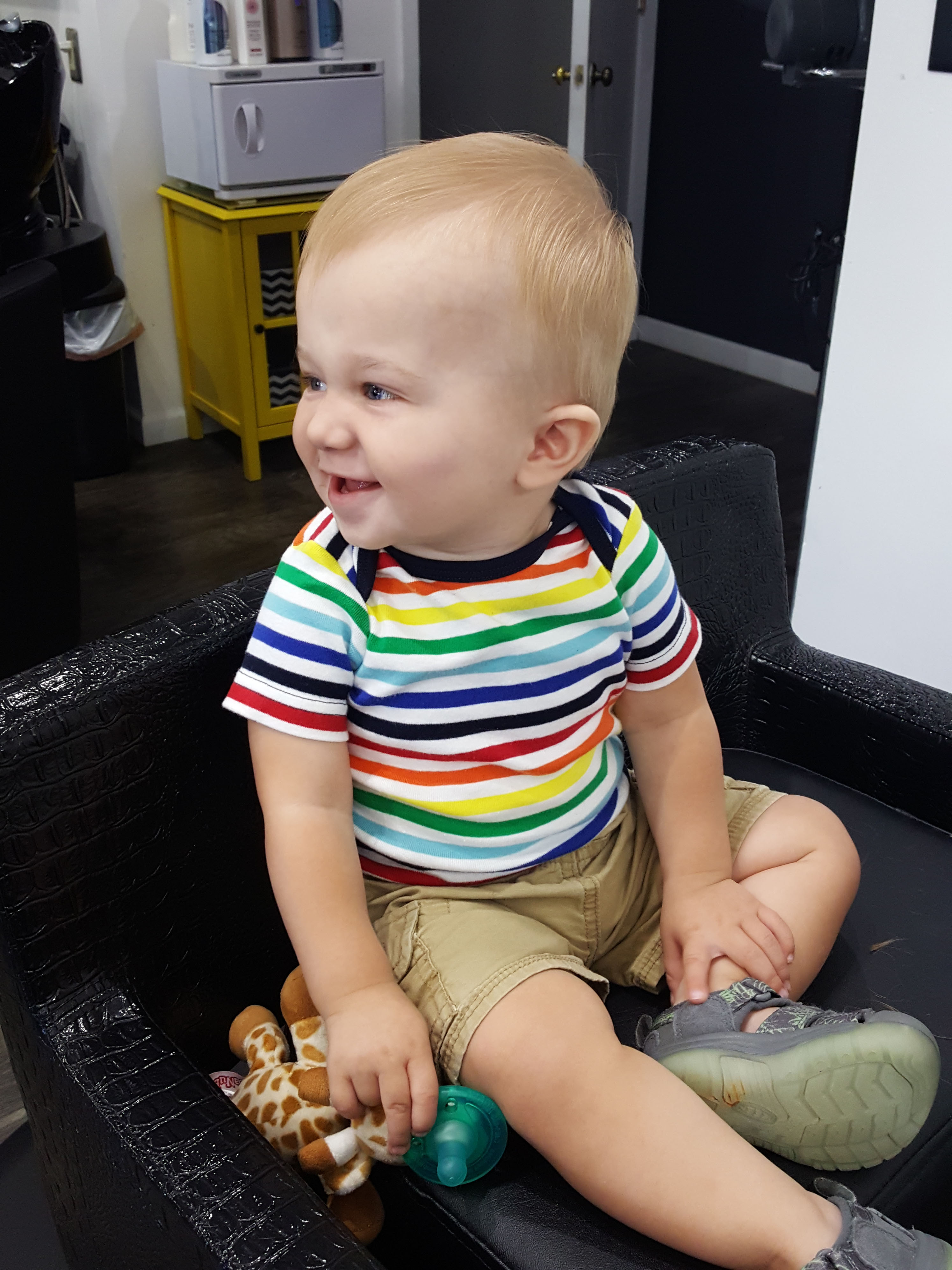 In early September, Tommy had his first haircut. He did a fantastic job. Tommy loved sitting on the booster seat on the hair cutting hair, wearing the apron, and letting the stylist work on his hair. When he was finished, he showed off his haircut and flirted with the couple of ladies getting their hair done.

We ended month 14 and started month 15 in Montana, visiting some good friends. They completed their medical residencies in Milwaukee with Jake and have settled long-term in Montana. It was Jake’s and my second visit (pictures from the first visit here) and Tommy’s first visit to their Montana home. I’ll have Montana pictures to share in the next monthly update.