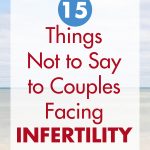 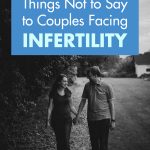 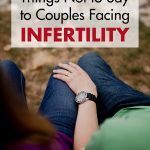 Infertility is a painful, awkward topic. Unfortunately, a lot of people can’t seem to say “I’m sorry” or refrain from saying something tactless, insensitive, or downright rude. Your friends and family will really appreciate it if you steer clear of the following things not to say to couples facing infertility.

1. You look so great holding that baby.

As opposed to all those who don’t look great holding babies? Seriously, what does that even mean? I know, some people really are naturals with babies and look right at home with a baby in their arms. But still. People always seem to reserve this remark for people who are way too young to have babies, way too old to have babies, or can’t/don’t want to have babies, which is ridiculous.

2. Take a trip together, and you’re sure to get pregnant!

Yes, thank you for publicly encouraging my husband and me to book a vacation, which is sure to involve having sex. And what a helpful “solution” in the midst of fertility treatments, exercise regimens, and special diets and medications. Despite popular opinion, there are zero statistics demonstrating a link between vacations or any other relaxing activity and increased odds of getting pregnant.

3. Not having kids means that you have so much free time. Enjoy it while you can.

Or any other statement that minimizes or glosses over the impact of infertility. (Over the years, I’ve gotten a lot of comments along the lines of, “It’s okay if it doesn’t happen for you any time soon. We love you just the same.” Yeah…this is also not a helpful comment.)

I also realize that this sounds a little hypocritical because I have talked before about taking advantage of the time that you have together. There’s no point sitting around an empty house, denying yourself the opportunity to go out to dinner or take in a baseball game or Broadway show. You should never feel guilty enjoying time alone together, no matter how much you want kids. However, this type of comment usually comes with a bitter tone from someone who hasn’t had a night out in a long time. Don’t inflect those feelings on your infertile friends.

4. Whose fault is it that you can’t get pregnant?

I’m not sure what it is about marriage and pregnancy, or lack thereof, that makes people bring up topics that they never would in any other context. Unless you’re a doctor, this information is no one’s business. Sure, infertile couples may share the specifics with a few trusted friends or family members. But it’s not a topic for general conversation, especially in public and in the company of anyone you don’t know very well.

5. You’re young and still have plenty of time to have babies.

Infertility doesn’t hurt less because you’re young. Taking a “you’re young, so don’t worry” stance isn’t helpful. When you’re ready to start a family and it isn’t happening for you, it’s devastating, regardless of age. Of course, the odds of getting pregnant are better when you’re younger. However, there are no guarantees that starting the journey to have kids at a younger age will result in a pregnancy.

I know that this comment is meant as a joke. It’s poor one at best. This remark is usually embellished upon, such as, “You can have my kids, they drive me crazy!” Now you’re complaining about your own kids while making me feel bad about the fact that I’m struggling to have kids of my own.

Actually, you don’t know that it’s going to happen for me. Voicing your confidence doesn’t do anything to boost my confidence. This comment also taps into an extremely unhealthy mentality that people who beat infertility are the ones who won’t give up or somehow just want it that much more. In reality, every couple must determine their limit for fertility treatments and then if necessary, decide if they will pursue other means of growing their family.

8. Have you tried [fill in the blank]? It worked for my [third cousin’s sister, best friend’s next door neighbor’s kid, etc.].

I think “have you tried” is one of the biggest pet peeves among anyone who suffers from a chronic condition. Almost everyone knows someone who has had success with Clomid, IUI, IVF, etc. Telling me that you have some distant connection with fertility treatments doesn’t reassure me that said treatment would work for me, too.

9. Have you thought about adoption?

I’m not sure what world people live in where they assume that adoption is this easy, simple answer to infertility. Obviously, it’s not. Adoption is great. It also comes with a lot of emotional baggage and a ton of expenses. Additionally, while it is a solution to growing a family, it’s not a solution to getting pregnant. It’s important to understand this distinction.

10. At least you’re not dealing with [fill in the blank] pregnancy symptoms.

Pregnancy symptoms are awful. Infertility treatments are awful. Knowing that you’re infertile and not able to do anything about it or not able to do anything about it right now (waiting for test results before proceeding with treatment, taking a break between treatments, etc.) is awful. There’s no reason to play a game of “who has it worse.” I wouldn’t wish any of these circumstances on anyone.

11. But you have one child! Everything is okay now.

Yes, having one child is a million times better than having no children. But it doesn’t mean that your infertility problems don’t exist anymore, you’re not still suffering from years of infertility, or that you’re not apprehensive about getting pregnant again. Most people want more than one child. Until your family is complete, it’s hard to move on from your infertility past.

There’s no question that going home to a nice, quiet house is a great thing. But when all you want is a child, sometimes it’s a little bit depressing. You would trade all of the nice, quiet order for just a little bit of chaos (or let’s face it, a lot of chaos) in a heartbeat.

13. Maybe you weren’t meant to be parents.

I know that people make this kind of statement without meaning any offense. But it’s still hard to understand how this statement wouldn’t be received as really offensive. No, not everyone is “meant” to be parents, whatever that means exactly. But it’s not helpful to say it. When a couple wants to be parents more than anything, being told that they might not be meant to be parents is the last thing they want to hear.

14. There are worse things that could happen.

There are always worse things that could happen. Again, it’s not a good idea to play the “who has it worse” game. Just because infertility may not be as tough as losing a parent unexpectedly, fighting cancer, or having your home burn down doesn’t mean that it’s a walk in the park.

15. This waiting period is part of God’s plan.

Taking the liberty of sharing what you believe is God’s plan for someone else is a risky move. No one ever knows this sort of thing for sure. When you’re in the midst of a tough wait for anything in life, it’s all but impossible to understand why you’re waiting until much further down the road. Without understanding the wait, it’s frustrating to hear this sort of statement.

Are there additional things not to say to couples facing infertility that you would add to this list?

Pin this post for easy access to the 15 things not to say to couples facing infertility later!

Now that you know what not to say, consider 15 things to say and do for your loved ones facing infertility!