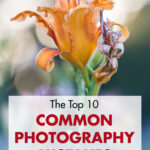 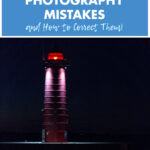 When you’re trying to step up your photography game, sometimes it’s hard to know where to start. You know that there’s room to improve, but what elements will take your images to the next level? While there’s no limit to the number of ways you can improve your photography, I’ve selected just a few of the most common photography mistakes photographers make and how you can avoid or fix them.

1. Not paying attention to the background

A cluttered background distracts from your subject. In controlled environments (i.e., an indoor photography studio, photographing jewelry or food), it’s easy to choose the best backgrounds for the subject at hand. In uncontrolled environments (i.e., an engagement shoot in a park, downtown Chicago on vacation), there are times it will be virtually impossible to eliminate all distractions from your background (i.e., a crowded city street).

Regardless of the given environment, it’s important to get in the habit of paying attention to your background. If there is a flagpole directly behind the person you’re photographing, moving a couple of steps to the left will make the flagpole much less distracting or may even allow you to move it out of the frame altogether.

2. Not lighting your subject properly

Lighting can make or break a subject. A beautiful plate of cookies under harsh, yellow kitchen lighting will look pretty unappetizing. Whenever possible, shoot in natural light. If you’re using artificial lighting, use white daylight bulbs to retain realistic colors. Make sure your image is well-exposed with minimal harsh shadows. Consider using a flash to bump up the available light or fill in shadowed areas. When you’re shooting outside, avoid direct sunlight unless you’re trying to create harsh, high-contrast images. Filtered sunlight or soft early morning or early evening light is much more flattering for most subjects.

3. Not moving to get the shot

Most people approach a beautiful flowerbed and say, “Hey, those are nice flowers,” snap a quick picture, and move on. You may have produced a nice snapshot of the flowers, but it will be nothing more than a snapshot. To create a stunning image, you often have to move a bit to get the shot. Position yourself directly over the flowers for an overhead perspective or kneel down to get a straight-on, close-up shot of a single flower. It may take some trial and error to figure out which angle will work best for a single subject. Keep experimenting until you get a shot you really like.

If you’re not ever zooming in to get a shot, most likely you aren’t photographing your subjects close enough. There are certain types of photography, such as landscape photography, that lend themselves naturally to wide shots. However, for most photography, you’re better off getting closer and/or zooming in to fill the whole frame with your subject, as I’ve done with the example shot above of my cat Hobbes. If you’re shooting with your smartphone, you’ll lose image quality when you zoom. Get as close as possible to create a strong, sharp composition.

Most people’s first instinct is to center a subject perfectly. There are times a perfectly centered subject can be very powerful. However, generally, you’ll create a stronger shot by following the rule of thirds and positioning your subject to the left or right of the center, as I’ve done in the above example of a flower.

6. Not worrying about focus

A crisp image transforms a mediocre photo into a great photo. When you take a picture, pay attention to where the camera is focusing. The camera will usually, but not always, identify the subject correctly. Sometimes you need to change the focus point manually to create the image you want. The change may be as subtle as focusing on a cat’s eyes instead of its ears to ensure its whole face is in sharp focus.

During an event, most people focus on taking a few posed shots and little else. Think about how you’re going to share the story of the entire event. Make an effort to capture the smaller details (i.e., table decorations at a wedding, the altar at the church during a baptism) as well as candid moments (i.e., two children talking together, the bride checking her hair before the ceremony). The little, unplanned moments can be just as meaningful as the big moments and the planned and posed captures.

8. Being frugal with your shots

I have talked before about how taking lots of pictures allows you to make lots of mistakes. Memory is cheap. If you find yourself limiting how many pictures you’re taking or stopping to delete shots from your memory card, invest in more memory. The SanDisk Extreme cards are a great option. When you have ample memory, you won’t be afraid to try taking the same shot from multiple angles or with multiple camera settings. You may end up taking a couple dozen shots or more of a single subject and only keeping two of those shots, which is fine. The above example is the fourth out of four shots that I took of this perspective of the church, and it’s the one that I like the best.

You see so many photos that have been way over-processed. I didn’t have it in me to over-edit some of my own shots to a cringeworthy degree, but you can see examples here and here. Yes, most photos require at least a few minor edits, such as cropping and a light adjustment. I know some people like to play with editing and create high contrast or overly saturated images. In some instances, it works, but in most instances, it doesn’t. To give you some perspective on this subject, check out this fantastic article about how much online images are Photoshopped. Most people look at these types of images and think, “Wow! I can’t believe it really looked like that.” without stopping to consider how much editing went into the shot. Be intentional with your editing, taking care not to over-edit unless you’re trying to achieve a certain effect.

10. Leaving the lens cap on and/or the camera switched off

Taking a great image often requires being ready at just the right moment. You never know exactly when that great moment is going to occur. When you’re shooting with a DSLR, take off the lens cap and leave the camera on. It will go into a type of sleep mode when you don’t shoot for long stretches so the battery doesn’t drain too quickly.

Do you have any other tips for steering clear of common photography mistakes?

Feel free to leave them in the comments!