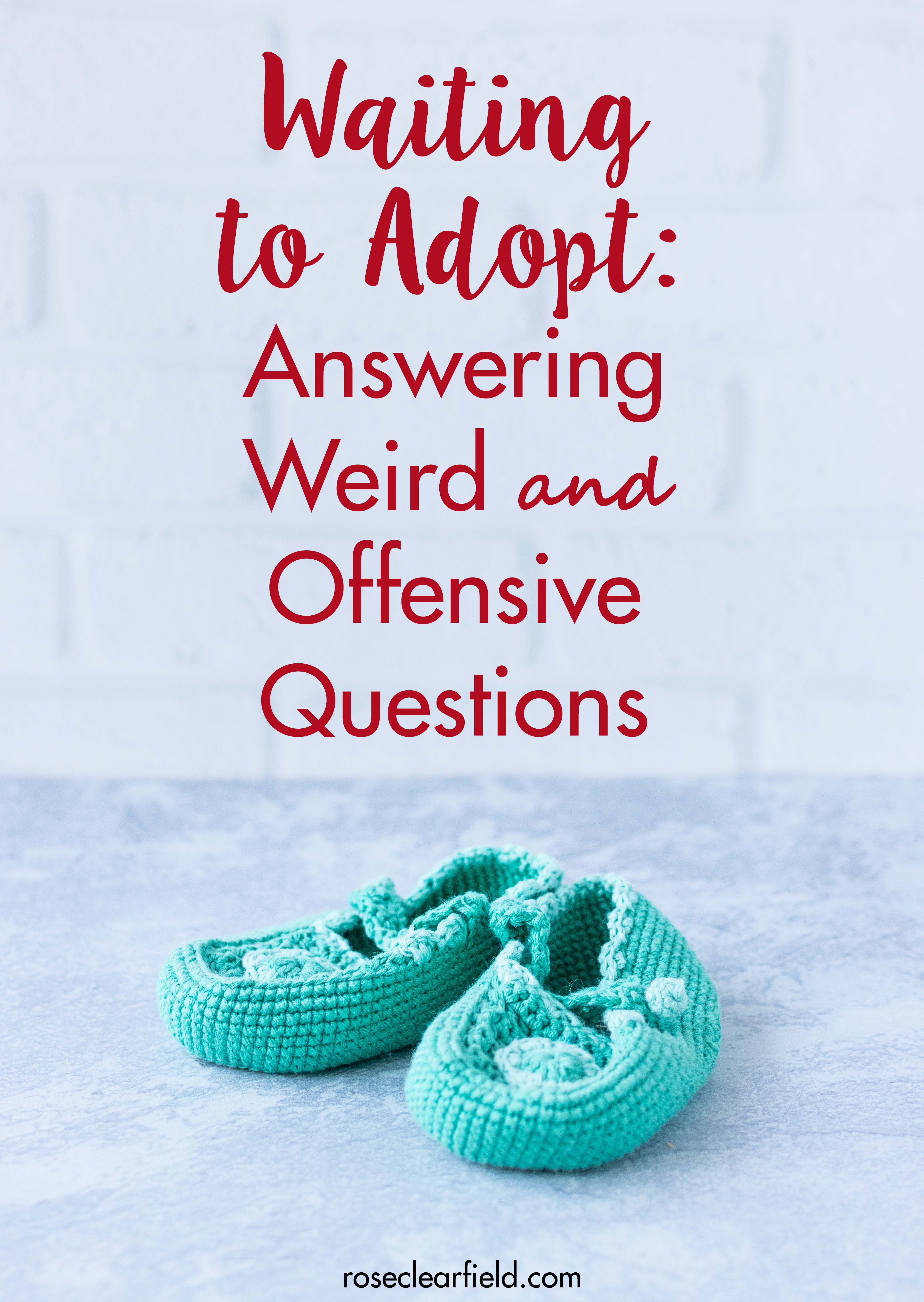 Adoption brings out a lot of weird and offensive questions. Many people don’t know what to say and end up saying something rude or discriminatory. Other people simply have no filter and say the first things about adoption that pop into their heads. Either way, when you’re waiting to adopt, it gets exhausting answering a host of well-intentioned but ignorant or odd questions about adoption. I’ve outlined a number of the most common weird and offensive questions people ask during the adoption process. This advice is intended both to help couples prepare appropriate responses and to help their loved ones ask more well-informed questions.

On the wait time for adoption

I can’t tell you how many people ask me, “So how long do you think it’ll be before you adopt?” If you’re not in the mood for the discussion, you can simply say that you have no idea, which is the truth. For some reason, wait time is a topic where I don’t mind providing a little explanation. As such, I’ve explained to a lot of people (including our very closest family and friends), often multiple times, that our agency tries to limit how many people are in the waiting pool at once to reduce the odds of couples waiting more than a few years. I explain how much it costs to complete a home study and how once people have invested that much time and money, they don’t want to wait five or six years.

Then I also explain that there are absolutely no guarantees. Even with a reputable, well-connected agency and a small waiting pool, you may still wait several years or more. And you don’t know when and how an opportunity will arise. It might be two days, two months, or two years from now.

I didn’t want to play the “boy or girl” game back in my early naive days of trying to get pregnant. I definitely don’t want to play it eight+ years into trying to build our family. It’s just so beyond the point right now for me. But it seems to be a topic people can’t stop talking about, no matter where you are in the process of trying to grow your family, biologically or through adoption. So even though this question makes me want to slap people, I try to be polite and answer nicely before moving onto another topic as quickly as possible.

On your adoption preferences

People don’t really know what they mean when they ask you about adoption preferences. They think they’re asking if you want a boy or a girl. Or worse yet, they want to know if you want a baby that looks like you, whatever that’s supposed to mean exactly.  When we were working on our home study, we would show the exact adoption preferences form (not filled out) to friends and family that we had to complete. It helped people readjust their mindset on this question quickly without awkward conversation. I’m linking a real preferences form from Summit Kids, so you have your own example. In answering this question, I would either pull it up on my phone or give a few example preferences and then say, “And now imagine filling out five more pages with these type of preferences.”

On the cost of adoption

For some reason, people think it’s okay to ask couples how much adoption costs, even though they’d never ask a new mom what she spent on pre-natal care and delivery. To make matters worse, people often phrase cost-related questions rudely, such as “How much did your son cost?” or “How much did you have to spend to get a baby?” As always, if people are thinking about adopting themselves, I’m happy to share detailed information about adoption costs (i.e., home study, finalization lawyer’s fees, etc.). Otherwise, it’s best to move onto another topic as politely as possible.

If people push you on the cost topic, encourage them to do their own research. It’s not hard to find out what domestic and international adoption costs are in most states.

Until recently, the vast majority of adoptions, both domestic and international, were closed adoptions. Today 95% of domestic infant adoptions in the United States today have some level of openness. [Source]  I’ll be honest: I didn’t know this statistic either until I researched it myself, and it’s still a shocking figure to me. And I’ve completed all of my adoption training within the past few years.

It’s going to take at least another generation or two before people start to become more comfortable with the notion of open adoption beyond meeting birth parents at a matching meeting and exchanging occasional emails or texts. As such, you’re likely to encounter a lot of weird questions about open adoption and people advising against it, due to misinformation and rumors that perpetuate through the media.

Our family does have an open relationship with our adopted son. It’s been an amazing experience, far more than any of us (birth family included) ever imagined. As such, I feel strongly about advocating for open adoption and encourage other adoptive families to do the same.

On the birth place of the adopted baby

If you do have specific reasons for choosing domestic or international adoption or a specific country within international adoption, it’s perfect okay to share these reasons. It’s also okay not to share anything, especially in response to more offensive questions about the topic. Funnily enough, my son Tommy was born right in the greater Milwaukee area. People are just as surprised, if not moreso, to learn that he was born locally than they would be if he were born far away.

It’s mind blowing that in this day and age, some of the most common adoption myths still haven’t been debunked. There seem to be just enough people beating the odds and getting pregnant while pursuing adoption to keep the myth circulating. The good news is that there is zero evidence that pursuing adoption affects fertility. Consequently, it’s one of the easier waiting to adopt questions to answer. If people really aren’t convinced, point them toward a reputable resource such as Resolve or Creating a Family.

On “everything happens for a reason”

Typically people don’t ask questions relating to “everything happens for a reason,” but they do make remarks about it in regards to adoption. People are quick to give “God has a plan for growing your family” and “I know that you’ll have kids when the timing is just right” remarks. I know that these statements are well-intentioned. But they aren’t very helpful. Implying that your loved ones should have to wait months or years to grow their families isn’t nice, especially when they conceived biological children without trying.

On the use of the word “excited”

Again, people don’t often use the word “excited” in a question about adoption. But people will use the term all the time while you’re waiting to adopt and in conversation for months afterward as well. And again, I know that people mean well and are genuinely excited for their loved ones to grow their families. However, it’s inconsiderate to the expectant parents out there considering adoption. Even under the best of circumstances, they will never use the word “exciting” to describe adoption.

“Excited” also doesn’t begin to encompass the range of emotions couples experience with adoption. Adoption is a long, scary, expensive, and invasive process that comes with a ton of uncertainty. Adoption is also an emotional rollercoaster. Your biggest highs are often someone else’s toughest moments.

On the questions people don’t ask

Funnily enough, as these things often go, most people who want to talk to you about adoption don’t ask the two questions that I think are most important while you’re waiting to adopt. I put these questions out there in hopes that more people will avoid asking the previously mentioned questions and instead ask one or both of the following questions.

The “how you’re really doing” question comes back to the “excited” remarks. It honestly doesn’t seem to occur to most people that couples waiting to adopt could be anything but excited or that anything about the process and wait involved is difficult. Take a step back, and think about what waiting to adopt is really like. When you ask your loved ones how they’re really doing, don’t expect to hear the word excited. Their responses may make you feel awkward. That’s okay. They aren’t expecting profound responses filled with unique wisdom. They just want to know that you care and are supporting them in their journey.

What you’re doing while you’re waiting to adopt

Once people know you’re waiting adopt, they’ll say something along the lines of “so you’re just…waiting now?” Unless you’re working on home study renewal paperwork, there isn’t anything else that you technically have to do while you’re waiting. But a lot of couples are doing something to cope because waiting and doing nothing is really tough. Among other survival strategies, many couples are preparing a nursery and getting support from a community or online adoption group. Additionally, couples waiting to adopt a first child may be taking advantage of their time together and are planning a trip or taking a class. Talking about these activities is helpful for families waiting to adopt.

Remember that you don’t owe strangers any explanations

As an advocate for adoption, it’s nice to educate others when the opportunity presents itself. When people are honestly curious about adoption, especially if they’re considering adopting children, I’m always happy to answer questions. However, a lot of people are just nosy and say the first thing that pops into their head. You shouldn’t ever feel like you have to answer adoption questions with people in line at Target or the grocery store.

Remember that you don’t owe loved ones any explanations either

Sometimes it’s actually easier to field those random questions in line at Target than it is with your extended family at Thanksgiving. You really don’t want to say something rude to your cousin or grandma. But you also don’t want to spend your whole holiday educating your family. And frankly, most likely they don’t want to spend their holiday being educated. Answering an occasional question or providing a bit of education is okay. Fielding multiple nosy questions right during a meal or in front of a lot of people isn’t okay.

Adoptive parents, what are the weirdest and most offensive questions you had to field while waiting to adopt your children?

As always, I’d love your input! 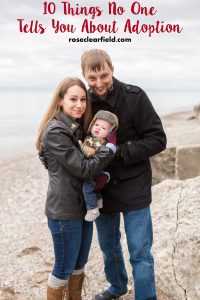 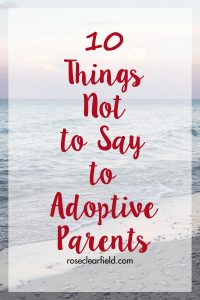 10 Things Not to Say to Adoptive Parents 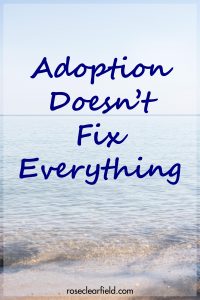