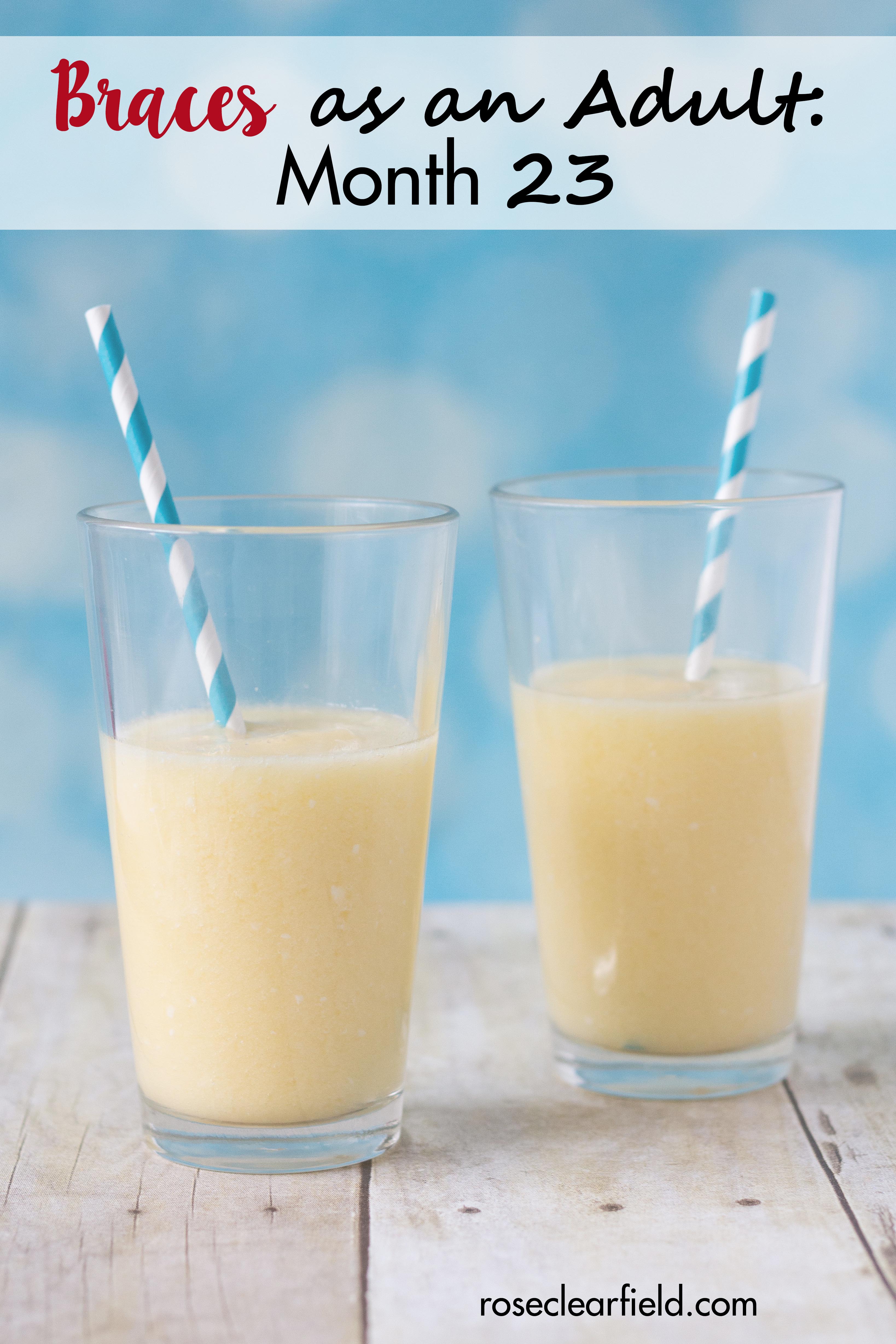 Yep, it’s month 23 of my braces as an adult journey. Actually, I’m just a couple of weeks shy of two full years. Spoiler alert: it will be two years before I have my braces off and well past it before I’m “done” – new impressions, retainer fitting, etc. I reached an officially #overit point back in December. I don’t really have words to express where I’m at right now.

If you’re just joining me in my braces as an adult journey, I urge you to go back to my initial post where I talk about why I decided to get braces at this point in my life. As I’m this far in now, I won’t be doing a recap in this post as I have in previous posts.

I purposely pushed this post back in February, so I could share what happened at my latest orthodontist appointment last week. As I don’t have a lot of commentary about life with braces that I haven’t shared already, I’ll mostly be focusing on the appointments I’ve had since my last update in mid-November. If you’d like more details about eating, pain level, adjustment progress, etc., scroll down to the end of this post and check out my previous braces as an adult installments.

I went to my early December appointment all excited that the end was in sight. They’ve just been working to get my left gap closed and right gaps positioned so that my dentist can build up my top right lateral incisor. The rubber bands are getting the spacing just right through the back of my mouth. Everything else is done. I thought that there was a real possibility that we’d talk about a date for taking off the braces.

And there was. But at some point between my late October and early December appointments, my top custom wire broke. As I had a full chain running over the top of the wire, I didn’t know it was broken. In my defense, the orthodonist AND tech I saw that day didn’t notice it either. The tech finally saw it when she took off the chain, after I’d had a consult with the orthdontist. So she had to call the orthodontist back over and make a new game plan.

As it’s a custom wire, they had to order a new one with a minimum four week turn around period. The orthodontist schedule was booked solid over the holidays with everyone trying to get their kids in while they were out of school. So I ended up waiting six weeks. During this time, I did make some progress with the top right lateral incisor spacing. And the rubber bands were doing their thing. But that was it.

The wire breakage wasted a lot of time, which I’m not going to lie, was really upsetting. I left the appointment in the worst mood. Then I spent a lot of the six weeks waiting to the next appointment in a bad place about the entire process. Without chain running across the top, I had to look at the stupid broken wire through the entire holiday. And I started 2019 without an end date for removing the braces. I was hoping to get my braces off by the end of 2019. Needless to say, it was not the way I was hoping to kick off the new year in my braces journey.

When I talked about taking Tommy to the dentist for the first time in his 17 month update, I didn’t mention that this appointment gave me an opportunity to vent to my hygenist about the whole situation (because that had nothing to do with how things went with Tommy). I took him to the dentist within a week of the broken wire appointment. I was still in an awful place about it. The hygenist asked how things were going, and I filled her in on everything. She was very sympathetic, which was really nice. I’ve had the same hygenist for five-ish years. So she’s been with me through the whole thing and has been very supportive.

The one plus side is that by the time I hit December, I was in a better rhythm with wearing the rubber bands. The first six weeks, I forgot to put them back in all the time. I did well at night, but at least a couple of times a week, I’d go long stretches during the day without wearing them. I still forget occasionally. And social occasions are tough. But for the most part, I’m doing pretty well with them.

I was counting down the weeks and then days until my mid-January appointment where I got my new custom wire. Everything went smoothly with replacing the wire, getting a new full chain for the top braces, and getting springs to help close the left gap and position the top right lateral incisor (brand new springs for the left gap, a second set for the incisor). At this point, the orthodontist was optimistic that after the late February appointment, we’d be able to consult with my dentist about the positioning of the incisor and from there, taking off the braces.

Within 24 hours of the mid-January appointment, the top wire shifted significantly on one side and poked out a lot. I’ve had a few sharp wire edges before. But none ever popped up right away after an appointment or really bothered me. It was pretty bad this time around. I resorted to dental wax for the first time in months, which kept it from being a constant irritant. Eating was still tough (a lot more so than what I normally experience after an adjustment). I almost tried to get in the day after, but I ended up waiting until early the next week.

I try to avoid bringing Tommy to my orthodontist appointments because their office really isn’t set up for it. Once when Tommy was tiny, I had my father-in-law meet me and watch him there. But I didn’t want to do that for a literally one-minute adjustment. So I just kept Tommy in his stroller, and it was fine. The tech agreed that the wire was poking way out and got it snipped for me. It made a huge difference immediately. 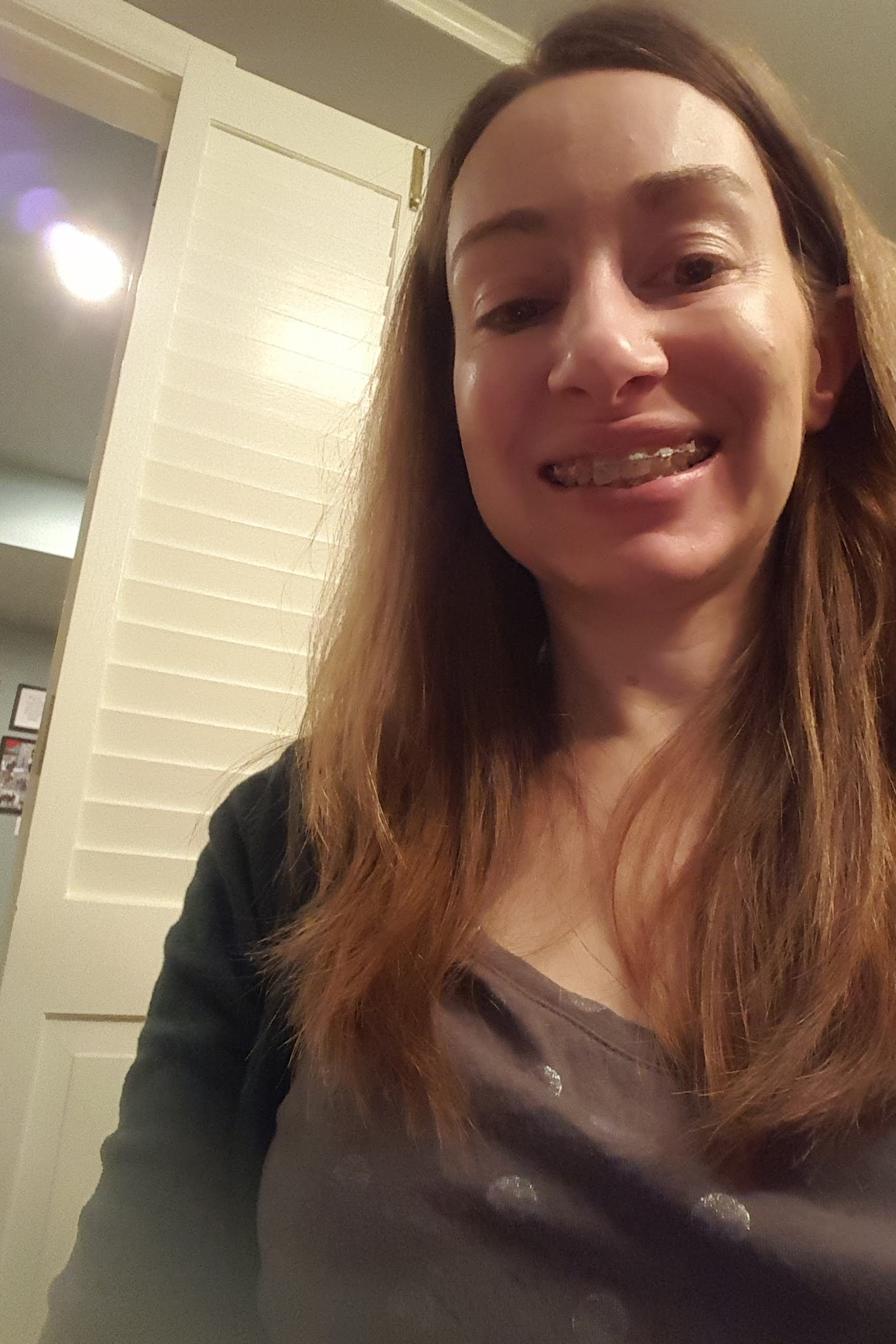 This period in my braces as an adult journey has been an epic fail for getting pictures with me in it. So I took quick selfie to give you an idea of my current progress. While the gaps around my top right lateral incisor are noticable, you don’t see them in pictures. Also, while I will always have an overbite, this is the first time in my adult life that my top teeth don’t cover my bottom teeth completely when I smile.

I had my most recent orthodontist appointment last week, in mid-February. The tech switched out both my top and bottom chains and put in new springs on the top to keep closing my gaps. (Are you tired of hearing me talk about my gaps? I’m definitely tired of talking about them.) Getting the new chains was awful, some of the greatest discomfort I’ve had during an adjustment in a long time. But I had surprisingly little pain afterward, which was a really nice change of pace. I was actually able to eat normally again that night, which is the first time that’s ever happened after an adjustment.

The orthodontist gave me the green light to consult with my dentist at some point in the next month to make sure he’s okay with the final positioning, since he’ll be doing the bonding on the top right lateral incisor. I have that consult scheduled for early March.

Then I’ll go back to the orthodontist in late March. If both the dentist and orthodontist are happy with my gaps or lack thereof at that point, we’ll move forward with taking off the braces. I’ll still have the removal itself, followed by impressions for retainers, getting the retainers, whitening (which I’ll talk about with my dentist in more detail at the March consult), and bonding. So I’ll have at least a couple more updates in this series, if not more.

Right after Thanksgiving, I had a medical appointment for something completely different. One of the women who was working with me asked about my braces because she’d finished her adult braces journey about six months prior. I actually have more discussions about braces with people who had them as adults than anyone else.

She mentioned that even six months out, it’s still weird not to have braces anymore, which is something that I think about a lot. I always have, but I do more than ever now as I’m getting close to the end. First, until very recently, my teeth didn’t fit together right at all. I’m still getting used to the fact that they do fit together nicely. Second, even when you’re living with something you don’t like, it becomes your new normal. It takes a while to re-adjust again.