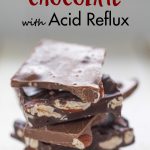 I’ve had acid reflux my entire life. After a bad flare-up during my senior year of high school, I started taking medication and have been managing it actively ever since (~15 years). Until about 2010, taking medication and adhering to best acid reflux practices (i.e. not laying down after eating, not eating several hours before heading to bed) kept my acid reflux at bay the majority of the time. I didn’t have any food triggers.

Then one day, it was like a light switch flipped and chocolate started triggering reflux. I don’t think chocolate was the only thing triggering reflux during this period. But I went through a bad reflux flare-up, one of the worst I’ve had since high school. It was really frustrating, and the fact that chocolate was playing a clear role in it made the flare-up that much more frustrating.

I know not being able to eat chocolate is a first world problem. But when you love a food, and you can’t eat it anymore, it’s rough. I LOVE chocolate and for many years, would eat it daily. A little square of Dove dark chocolate is a great way to finish a meal. When I would order dessert at a restaurant or when I would have my choice of desserts at a party or other social function, I’d always go for the chocolate dessert.

After a fair amount of denial, ultimately, it got to the point that I felt bad enough that I knew something had to change. I quit eating chocolate daily and slowly started saying no to or taking a pass on chocolate elsewhere. My flare-up did subside, and I’ve been doing pretty well ever since. I still have an occasional rough reflux day (usually due to stress), but I haven’t had any other major incidents.

So why is this post called how to eat chocolate with acid reflux?

However, avoiding chocolate altogether is still difficult because let’s face it: chocolate is an amazing food. It’s been over five years since my last bad flare-up and I have a much better understanding of when and how chocolate triggers reflux for me. Consequently, I’ve felt comfortable re-introducing it on a more regular basis. No, I don’t eat chocolate every day. And I’m pretty careful about what chocolate I eat, and when I eat it. But so far, reintroduction has been successful.

I know I’ve given a lengthy introduction before getting to my tips for how to eat chocolate with acid reflux. I think it’s important to understand where I’m coming from and that it’s taken me years of living with reflux to develop these strategies. I’m not just sharing a few quick tips I found from online articles. I’m sharing my tried-and-true tactics I’ve learned through many years of living with reflux.

Please note that I am not a physician. I have consulted with multiple physicians about reflux medications and symptom management strategies, which has helped guide my current medication regiment and general life routines. I can’t guarantee that any strategy that works for me will work for anyone else. If you ever have questions or concerns, please talk to your doctor.

Before I get into the tips for eating chocolate with acid reflux, I want to address one more point.

Which type of chocolate is best with acid reflux?

I get a ton of people arriving at this post who are looking for advice about which type of chocolate is best to eat if you have acid reflux or GERD. The short of it is that all chocolate is bad for acid reflux. Cocoa powder is acidic, which can trigger reflux. Chocolate contains caffeine and theobromine, which can further trigger reflux Additionally, chocolate has a high fat content, which may also heighten reflux symptoms. [Sources – 1 | 2 | 3]

Personally, I love salty-sweet combinations so pairing a few squares of chocolate or a chocolate chip cookie with cashews or peanuts works well for me. Of course, you shouldn’t feel limited to this pairing. If you’re in a social setting with a big food spread, it’s often easy to eat a bit of chocolate and then finish snacking with a helping of fruit or veggies, which works really well, too.

Say you have a mild to moderate dairy allergy. Having a bowl of macaroni and cheese or a slice of pizza is okay. But you don’t want to follow it with a huge serving of ice cream. The same principle applies to acid reflux. If you’ve just had a spaghetti dinner with lots of marinara sauce, onions, and garlic, don’t follow it up with chocolate. If you’re going to eat chocolate after dinner, don’t pair it with coffee or tea.

Prioritize chocolate over other reflux-triggering foods

Similarly, if you want to eat chocolate without triggering reflux, you may have to give up or significantly cut back on other reflux-triggering foods. If you have severe reflux, any trigger food may prove harmful, but for many people with reflux, there are ways to eat trigger foods in moderation without harmful side effects. In many instances, the prioritization may be as simple as choosing salmon and steamed broccoli for lunch instead of the spaghetti with marinara sauce so you can have some chocolate later that afternoon.

Prioritization does not mean that you can eat as much chocolate as you want without consequence. I wouldn’t be writing a 1,000+ word post on this topic if there were such an easy fix. Skipping the garlic and onion heavy entree will not give you some free pass to eat a huge amount of chocolate. Instead, it will allow you to eat a small serving without triggering reflux.

Save chocolate splurges for chocolate you really love

When you can only eat a limited amount of chocolate each week, make it count. Don’t waste your chocolate intake on cheap candy or something you don’t really love. I used to take chocolate for granted. Now that I only eat it a few times per month, I appreciate it so much more. A huge part of this appreciation comes from choosing chocolate I love. When I eat a homemade chocolate chip cookie or a piece of high-quality dark chocolate with almonds, it tastes like the best chocolate I’ve ever had.

Eating several hours before going to sleep is a big no for acid reflux, so it goes without saying that eating chocolate several hours before going to sleep is a huge no. In general, I don’t eat chocolate after about 5:00 p.m. If you stick to this rule the majority of the time, most likely you’ll be able to break the rule once in a while, especially if you’re good about taking your meds and adhering to other acid reflux practices. Eating chocolate at night every night will leave you feeling lousy, but an occasional dessert at a restaurant or party will be okay.

When you’re having a bad flare-up, it doesn’t take much to keep setting it off. Eating chocolate will further aggravate your symptoms, making them even worse. If you’re like me and often get minor flare-ups due to stress, steering clear of chocolate is the worst. A little chocolate should be a bright spot during a tough day. Unfortunately, it’s not when you have acid reflux. Steer clear of chocolate and any other major acid reflux trigger foods until you’re feeling better.

Pay attention to your body

Again, I’ve shared the strategies that have worked best for me for eating chocolate with acid reflux. It’s taken me years to figure out these strategies and to develop new habits for eating chocolate without feeling lousy. I’ve had to pay close attention to what does and doesn’t make me feel good and to steer clear of certain foods or avoid chocolate altogether when I’m stressed or something else is triggering my reflux. You need to do the same thing. No one else has your exact same body and will be able to tell you exactly what will or won’t work for you.

[Disclaimer: The product links are affiliate links. Thanks for your support!]

Do you have any tips for how to eat chocolate with acid reflux?
If you have acid reflux, I’d love to hear your insight on this topic!

Get first access to new free printables, holiday resources, and much more!

I hate obnoxious email lists with multiple daily emails, too. I only send ONE email per week!

16 thoughts on “How to Eat Chocolate with Acid Reflux”